Home  »  Website  »  National  » Reportage  »  Mumbai-Ahmedabad Route Will Have One Bullet Train In Every 20 Minutes During Peak Hours: Here’s All You Need To Know

Mumbai-Ahmedabad Route Will Have One Bullet Train In Every 20 Minutes During Peak Hours: Here’s All You Need To Know 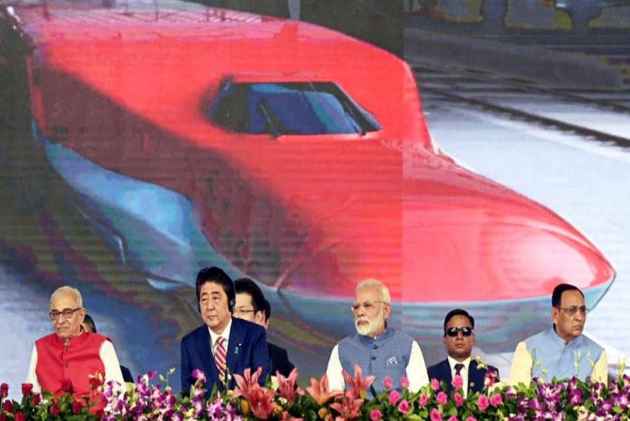 The proposed Mumbai-Ahmedabad bullet train service that will connect both the cities in two hours would be available every 20 minutes during peak hours.

According to reports, Managing Director of the National High Speed Railway Corporation Limited (NHSRCL), Achal Khare on Sunday said that three trains would run during peak hours (7am to 10 am in the morning and 5pm to 9 pm in evening) while two trains would operate during non-peak hours. There would be 35 pairs of bullet train services, which means 70 trips in a day.

The much hyped bullet train would run at a speed of 320 kmph.

According to this report in The Indian Express, the  Mumbai-Ahmedabad segment continues to remain in high demand with the Western Railway operating at least 20 trains daily. Every day as many as 10 flights are planned between Mumbai and Ahmedabad to cater to the passenger demand. At present, it takes seven hours by train and an hour by flight. The number of annual passengers on the route is 1.5 lakh people at present. It is expected to increase to 3 lakh.

There will be 12 stations on the bullet train route —- BKC, Thane, Virar, Boisar, Vapi, Bilimora, Surat, Bharuch, Baroda, Anand, Sabarmati and Ahmedabad. The NHSRCL would run both fast trains that would halt at Mumbai, Surat, Baroda and Ahmedabad.

“According to our study, there are as many as 4,700 passengers who travel daily by flights between Mumbai and Amhedabad. While 5,000 passengers take trains every day, around 15,000 people use cars to commute. We plan to carry at least 40,000 passengers on a daily basis between the two cities once the bullet train is in operation,” said Khare, as quoted by Express.

The bullet train would have ten coaches consisting of one executive coach and nine general coaches by 2023. There would be 750 seats in a ten-coach train and 1,250 seats in a fifteen-coach train.The total number of coaches would increase to 15 by 2033.

There would be both general and reserved coaches on the train. Baggage checking facility would be available at certain stations. Luggage would be parked in the carrying space near the coach but small bags and handbags could be kept in overhead compartments.

The bullet train would have seven toilets for men and women and an exclusive women’s toilet. Among other features, it will have folding beds and rotating The Bandra Kurla Complex (BKC) station will be underground at about 25-metre depth and will be integrated with International Finance service Center (IFSC) building proposed above it.

The train would be run by one driver and would have conductors to check tickets of passengers. There would be on board signalling system for drivers.

Trials of the coaches would begin by 2021.