If summer is here can Alphonsos, or haapus as we like to call it, be far behind? 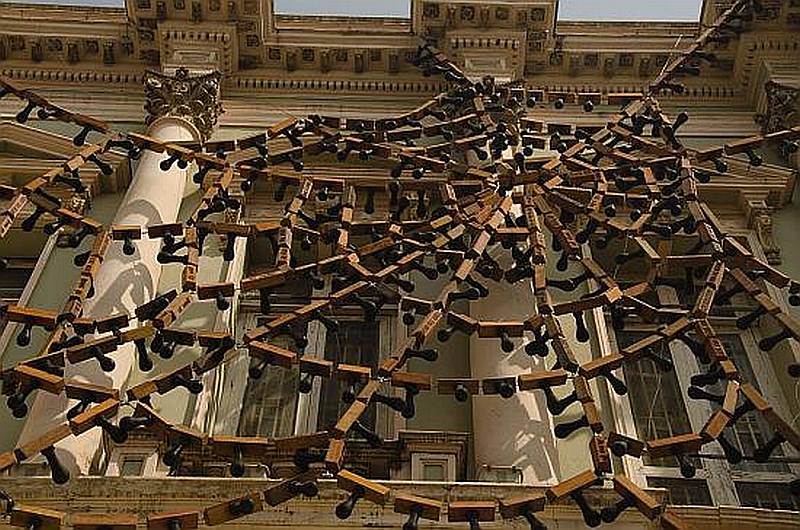 Get Caught, Get Tangled

A first of its kind, unique collaboration between the very well respected Bhau Daji Lad Museum, Mumbai and ZegnArt Public, Italy has resulted in a mammoth installation of a web of stamps on the façade of the museum building, in Byculla, south Mumbai. The public artwork created by Rina Kallat, who was selected after a rigorous selection process among seven finalists, has symbolic rubber stamps engraved with names of roads in Mumbai—colonial and new ones. Seemingly simple and powerful, the artwork touches upon several undercurrents such as importance of stamps (read official approval, red tape, bureaucracy), mirror image of letters requiring the public to apply themselves in remembering and recollecting a lost time, issues of modernity and claiming original identity and travel to the past in a bid to claim the future. The artwork will be on display till May 19. Worth making a trip to the museum.

The Class 12 students in the state will perhaps spend the long summer vacation biting their nails—not just worrying about the ‘life-changing’ board exam results but wondering when the results will be out. Teachers working in junior colleges, who have been making various demands including better pay, have refused to correct the mark sheets as a sign of protest. Higher Secondary (class 12) exams are considered to be a super important ticket to admissions in professional courses. Delay in results may be far worse than bad results, because the students need to make it in time for other national-level entrance exams. Also striking are other university teachers, resulting in under graduate exams getting delayed or postponed. Talks and negotiations are on.

Earlier this week Congress vice president Rahul Gandhi was in town to meet party workers, office bearers and address party issues. The visit caused traffic snarls along his way from the airport to Tilak Bhavan in Dadar. Party leaders reportedly argued and fought in front of son of Sonia as he sent enough signals to indicate that revolting members may not be entertained.

As if all this was not action enough, the icing on the cake was perhaps the state government’s announcement of an MoU with Corning Technologies to set up an optical fibre manufacturing unit at Chakan, Pune. The invite was titled, “Corning India.” Whoever thought of the name is a genius. Never before have we felt more conned, oops corned, in India, no? On that note, will you be watching Sare Jahan Se Mehenga, a film obviously about the Daayan mehengai?

No Drought in Politics

How can any musings be complete without our very own Raj Baba. Still on tour through drought affected regions and still spitting fire. However, this time it was NCP workers who struck first and attacked Raj Thackeray’s convoy in Ahmednagar. Of course it resulted in “eent ka jawab patthar se denge” dogma of MNS, and several offices were burnt in Pune, Mumbai and other parts of the state. An uneasy truce has been declared but the war of words (and devoted party workers) may just keep surfacing all the way till next year’s polls—general and assembly. Meanwhile, the drought conditions are worsening in Marathwada and the centre has provided Rs 574 crore so far of the Rs 2,500 crore that the state has asked for.

Amid news of rapes and murders of girls, comes the international women’s day. An interesting photo contest organised by the U.S. Consulate General Mumbai, titled, “Ordinary Women, Extraordinary Work” that is on since March 1 and will run till March 31, 2013 is open to Indian nationals residing in Maharashtra, Gujarat, Madhya Pradesh, Chhattisgarh, and Goa. In keeping with the popularity of Twitter, there's a Twitpic category in which contestants can post their pictures on Twitter to @USAndMumbai using the hashtag #OWEWphoto. For more details, look up the complete contest rules.

Every Dog Has Its Day

The civic body in Mumbai is planning to conduct a dog census to identify the exact number of strays in the city. The fight between the dog lovers, aunties in the neighbourhood who lovingly feed not just leftovers but fresh cooked food to the man’s best friends, animal rights activists, and harrowed residents who spend sleepless nights listening to the barking concerts and get chased and bitten by them every now and then, is not at all new. The census, which was last conducted five years ago, will only make it more intense.

For the past one week or so, newspapers have been filled with record temperature reports—39 and 40 degrees—and it is just the beginning of March. Traditionally, the official onset of summer is Holi, which is still a good two weeks away.

However, there is one good thing about Mumbai summers (yes, there is, never mind the gallons of sweat). It is the arrival of Alphonso, or haapus as we like to call it. Wooden crates full of ripe mangoes have already made an entry at the plush fruit wallahs'. They are pretty much still off limits for the mango people (aam admi re), but we shall all beat the heat with mango milkshake sooner or later.