And the improvisations continue, leaving not even Medha Patkar immune... 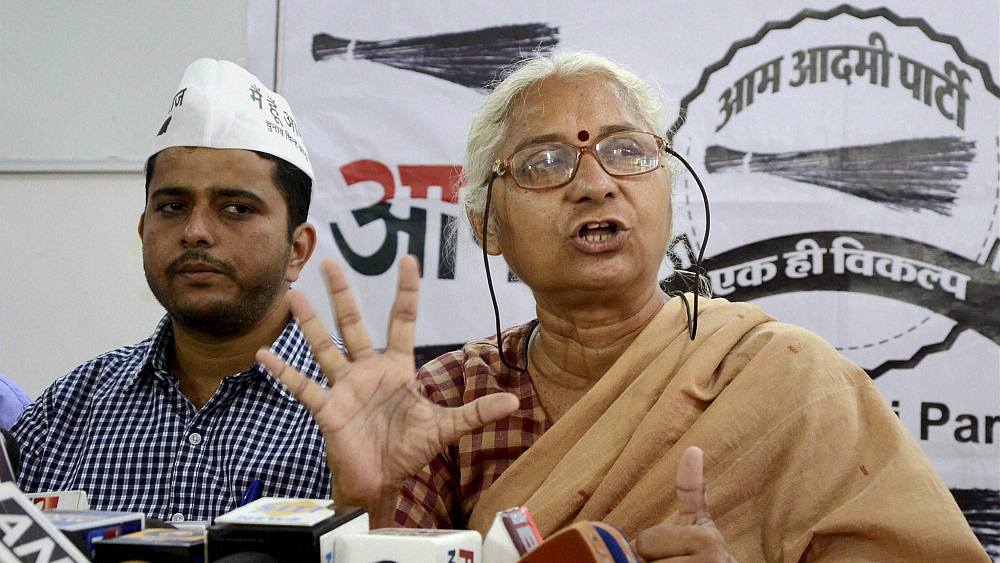 Even  Medha Patkar couldn’t resist cracking a smart one-liner on the current BJP slogan, ab kii baar Modi sarkar, which has made the world a lot more creative, albeit shallow-creative. At the press conference to release the Aam Aadmi Party (AAP) manifesto for Mumbai, Medha Patkar after speaking about several issues, broke into a tired smile and said ab kii baar hamaarii sarkaar, nahin ab kii baar logon kii sarksar, and her smile widened. The witty one-liner livened up the otherwise strained, tedious atmosphere where journalists were losing patience over detailed explanation of each manifesto point, which included housing for poor, women’s safety, securing livelihoods and environmental protection apart from end of corruption and decentralisation (like Panchayati Raj). Meanwhile, there is no dearth of improvised one-liners. The last I heard: “Coverage chhodo naa yaar, ab ki baar…

From Broom to Brooch

At the same conference, the cool corporate candidate Meera Sanyal showed that branding remains a crucial part of her campaign strategy as well. She sported a broom brooch, yeah a brooch that is a broom, the AAP symbol. She also never fails to sport the cap and a black thread around her neck, instead of a string of pearls. However, she is not one to be mistaken for being flimsy. She spoke softly yet very firmly about the port trust land that falls in South Mumbai constituency. She said that the 700 hectares of land needs to be returned to Mumbaikars and it was something that even Indira Gandhi had approved of in 1980. She alleged that there are vested interests at play and there is a possibility that the land may be gobbled by private builders. “We should not lose this land, the way mill lands were lost,” she said. It is another matter that current MP Milind Deora also tried to claim that he had also opposed the project (to develop a container port). All that is fine, but if the land can really be freed up, what are the chances that it will actually go to the poor and needy?

As if women’s issues— be it safety, health, infant mortality— were not badly ignored enough, we had to hear about Samajwadi Party’s Mulayam Singh Yadav and Abu Azmi spew venom about women and sexual assault. After Mulayam said that boys deserve leniency because mistakes happen, Azmi went a step further and demanded death by hanging for all women who have sex outside of marriage. When asked for a solution to the problem of rapes, Azmi said, as per a newspaper report: "The solution is this: any woman if, whether married or unmarried, goes along with a man, with or without her consent, should be hanged. Both should be hanged. It shouldn't be allowed even if a woman goes by consent." To which, surprisingly, his daughter-in-law replied in her tweets as follows,

Azmi further responded saying his comments were distorted. I don’t think anyone even wants to know anymore. Oh, and in the meanwhile, at one of the Samajwadi Party meetings in Kurla, a Muslim-dominated area, I heard the speaker screech loudly, “Aap hamaare log hai. Hamari taraf aayiye.” Wooing on caste-religion lines simply doesn’t seem to stop.

There are many points of views on defence expenditure and how it can be put to better use for improving other social indicators such as health and education. However, this one is tricky. INS Vikrant, India’s first aircraft carrier, which participated in the 1971 India Pakistan War, has been sold in scrap for Rs 60 crore. For many months activists fought to preserve it because it was turned into an Indian naval museum in 1997. However, the mounting maintenance costs compelled the Indian Navy to put it up for auction. Several negotiations between the state government and the navy, over who will fund the maintenance costs, failed and finally it was given to IB Commercial Pvt Ltd. The British-built ship was commissioned in 1957 and was decommissioned in 1997 and is set to have been turned into a museum because of the efforts of none other than Bal Thackeray. A petition, filed by activist Kiran Paigankar, is still pending in the Supreme Court but not much is now expected of it. For me, I remember going on INS Vikrant several years ago and feeling very curious and inquisitive, like all other school children on board. It was fun. And too bad that future school children would be deprived of it.

Nandu Bhende, the veteran rocker, who sang for bands like Velvette Fogg, Savage Encounter, Atomic Forest and Nandu Bhende Band, died as a result of a cardiac arrest at his Mumbai residence. He died on his way to the hospital, reports say. Son of loving character artist Atmaram Bhende (who played, among other roles, the old uncle in Lage Raho Munnabhai) and Dr Asha Bhende (Lily Ezekiel). Poet Nissim Ezekiel was his maternal uncle. Perhaps he was most known for the movie Disco Dancer but rock music lovers will remember him for bringing rock onto the rather conservative Marathi culture scene. He also played the role of Judas in Alyque Padamsee’s Jesus Christ Superstar, which, incidentally, Padamsee is reviving. However, the fact that he was still active on the music scene was heartening. One of the tributes by Hemant Kenkre on Firstpost read, “I am kicking myself for not attending his last major public performance in a Mumbai nightclub exactly a month before he passed away. From what one understands, Nandu and his peers made the audience misty-eyed, taking them down memory lane with awesome hits from a bygone era. I would have loved to listen to my favourite 'Night in White Satin' one last time!”

One small but significant piece of news that may have got lost in the election humdrum last week was the pitstop of Lifeline Express in Mumbai. A very special initiative by the Impact India Foundation, the mobile hospital has been running its course for more than 20 years now. This is world’s first hospital on train and offers treatment to poor in parts of India where medical treatment is hard to get. It was in Mumbai over the weekend for 3 days at the CST (earlier VT) station and several people were seen boarding the train not to go somewhere but only to get themselves treated.

A well-known Marathi play, titled White Lily and Night Rider, a sharp take on breakdown of relationships in the social media age has been adapted in Hinglish and presented at the Prithvi Theatre. Although Marathi theatre is still very popular and also extremely progressive, it is not very often that one sees a crossover in adaptation. And who could be a better candidate than Sonali Kulkarni to be that catalyst – she was trained under Satyadev Dubey, was a regular at Prithvi, has done Hindi films, published a column and performed in Marathi  (and Hindi!) films and plays all alike. However, the note deserves a mention for Rasika Joshi, who originally used to perform the part of White Lily (now performed by Sonali) and succumbed to cancer. The disturbing play shows the build-up of a relationship between (the user names) White Lily and Night Rider in a chat-room and how it all collapses when they meet in real life. Scary but perhaps all too common?