The BJP-Sena have yet again declared that no one can break their alliance. Watch this space... 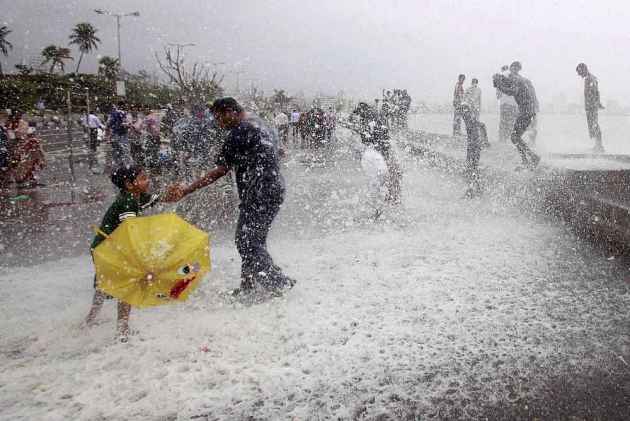 Finally, the rains arrived and it has been pouring for the past one week in Mumbai, relieving the citizens of endless wait and unbearable heat. However, as usual, it took just one day of heavy rains to throw the city out of gear. Apart from the traffic snarls and train delays, the annual scare of collapsing buildings too has already played out. At least five people have lost their lives in the past one week in three different incidents of wall or building collapse. The civic body also evacuated 21 families from a dangerously dilapidated building, thus “saving” nearly 100 lives. By demolishing the building they have also prevented land slide and further damage as the building was close to railway tracks. However, that is just one. With hundreds of “certified dangerous” buildings and perhaps as many buildings with illegal structural changes, for rescue teams the battle has only begun.

And yes, the fresh-out-of-oven Mumbai Metro has already reported incidents of leaks and some glitches because of the heavy downpour. Pot hole ridden roads, water logged railway tracks, leaking metro... The only relief is the magnificent sea front, albeit dirty, but complete with very beautiful huge waves and happy crazy people enjoying the season.

If conviction is any measure of justice, then two juveniles being sent to corrective homes in the Shakti Mills gang rape case, should give some sense of peace to the two victims and the society. However, the debate that juveniles involved in serious crimes like rape should be tried as adults is gaining more momentum and the central government is already said to be contemplating reducing the age limit for juvenile delinquents from 18 years to 16 years, as indicated by the recent pronouncements by Maneka Gandhi, the minister for women and child development. The special public prosecutor Ujjwal Nikam told the media that they tried to convince the Juvenile Justice Board that the culprits had committed a “most heinous” crime. However, the maximum punishment under the Juvenile Justice Act is three years in a corrective home, and that is what was handed out. Whether juveniles who participate in offences such as gang rape should be sent to normal jails is one thing, and whether they will be reformed in the corrective homes is a different debate altogether.

Praja Foundation released yet another health report card which, among other things, speaks volumes about the civic body’s research and response. The report, based on RTI information, says that while the BMC declared 1393 deaths caused by Tuberculosis (TB) last year, the record from death certificates puts TB deaths at 7127. Similarly, while BMC says Malaria deaths were at 30, the certificates put the number at 199. Dengue deaths have gone up more than four times in the past six years. The civic body officials dispute the Praja figures. Praja, on the other hand, has said that the BMC must look into their data gathering of notifiable diseases. Only then would they be able to comprehend the magnitude of the problem and address it accordingly. True that.

Finally some cheer for freedom of expression. The national Human Rights Commission has directed the government of Maharashtra to pay Rs 50000 to the two girls, who were detained for posting and liking a comment on Facebook. After Bal Thackeray’s death Shaheen Dhada from Palghar had posted questioning the total shutdown in the city for Bal Thackeray’s funeral on her Facebook account. Her comment was liked by another friend Renu. While Shiv Sainiks went on a rampage and destroyed Shaheen’s relatives property threatening of dire consequences, the police detained the girls instead of protecting them. The NHRC said that it was a violation of human rights and directed them to pay the compensation in the next four weeks, failing which they could initiate disciplinary action.

Kicking Up A Fuss

Just when we were celebrating yet another hug between SRK and Salman Khan at a politician’s Iftar party, there he goes again. Salman Khan is undoubtedly the most popular superstar and fans cannot have enough of him. However, he is also known for getting into trouble every now and then. And this time his panga is with news photographers directly. Apparently, photographers who were invited for a promotional event of his upcoming film Kick were trying to shoot from a cramped place, when the bouncers and Salman Khan’s security roughed up some photographers. While the photographers claim that even expensive equipment was damaged, the last straw was Khan himself saying on the stage that the photographers were free to leave if they so wished. After the photographers complained at Bandra police station, it is learnt that the security personnel tried apologising. To add fuel to fire, Salman tweeted:

“this is what I call a stand, the photographers r gonna loose out on wrk, but hv still taken a decision not to take my pics, happy fr them .”

“I wld hv immense respect for them if they keep this stand.”

The Bombay News Photographers’ Association has made it clear that the “boycott” is only for Salman, and not his film, other co-stars or his family.

Just few days ago the East India Company released a special gold coin in honour of Sachin Tendulkar. His last outing at the MCC also made news. While nothing seems to go wrong with God of Indian Cricket, his childhood friend and a genius-gone-awry Vinod Kambli is in the news for wrong reasons, yet again. A bank has issued a notice in a Marathi newspaper putting Vinod and his wife Andrea’s photos as defaulters. The bank officials told the media that he had not paid back home and car loans for several months and despite issuing several notices they remain inaccessible. He has now reportedly asked the bank to collect the money. But the damage is done.

Monica More, a college student who lost both her arms when she fell through a gap between train and platform in January, is ready to go home. After spending six months at the KEM hospital, getting financial help from different sources, Monica has been given a set of prosthetic arms, which will enable her to carry out basic tasks of daily routine such as eat and write. The myoelectric arms, for which she is undergoing training, are fitted with sensors that take signals from the human muscular movements and accordingly move the artificial wrist, fingers etc. While there is no denying of heart-warming help that came from all quarters, nothing can beat the presence of mind of two boys who brought her to the hospital. And the artificial arms will always remind us of the callousness of the systems where passenger security is not a priority. More than 1000 people are said to fall from trains due to over-crowding every year, often sustaining life threatening or permanent injuries.

And, yes, the BJP-Sena have yet again declared that no one can break their alliance. This time declared by BJP state unit head Devendra Fadnavis. In the game of he-loves-me, he-loves-me-not, this round is for love alright.