We are not yet done discussing if this was indeed Modi’s win or loss given the “wave” atmosphere in the rest of the country. 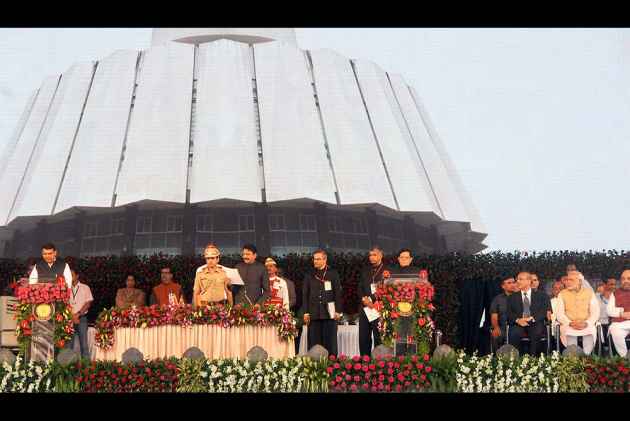 So after a whirlwind of 27 rallies, came 122 seats for BJP. We are not yet done discussing if this was indeed Modi’s win or loss given the “wave” atmosphere in the rest of the country.  And the BJP, Shiv Sena and the NCP are not yet done discussing whose support they would take or not take to reach the golden figure of 144 out of 288 assembly seats.

Amidst all this, a showstopper type of swearing in ceremony concluded. A crowd of 30,000 plus, a city jammed. Several celebrities and VIPs had to turn around and go back because they could not get past the security that was going crazy handling the supporters. Along with CM Fadnavis nine others including Eknath Khadse, Vinod Tawde and Pankaja Munde took oaths and promised to work for betterment of the state. Highlight, of course, was attendance of none other than Sena chief Uddhav Thackeray, who apparently decided to attend after getting invitation calls from senior BJP leaders including Amit Shah. Although it may have been one of the grandest ceremonies, as of now it is the slimmest “mantrimandal” (cabinet). Even as talks progress (if one calls it progress) with Shiv Sena, the CM will have his team in place soon. RPI (A)’s Ramdas Athawle has already demanded two ministries and 10% share and better implementation of Atrocities Act. Demand for ministries notwithstanding, it is heartening to know that he has highlighted the cause of Dalits, after yet another gruesome murder of a Dalit family, in his congratulatory message for the CM. Hope the CM is as prompt as is expected. About time.

Before Yogendra Yadav went into active politics as founder member of the Aam Aadmi Party, he was one of the most popular political analysts to dissect any elections. And being in the line of fire constantly for the past many months, he is only becoming more interesting and sharper. At a lecture organised by the Mumbai Press Club, he explained the difference between the Modi wave and other previous waves, how the election was won and what lies ahead of us. All this along with some stinging questions about AAP’s decision to not contest Maharashtra etc. He said that with 31% vote share, BJP had the rare record of getting simple majority with minimum vote share. He also spoke of three ‘anxieties’ of the population—about governance and leadership in “silent” Manmohan Singh’s regime, anxiety and fatigue with welfare model which accentuated perceptions that it was all about doles and subsidies and, lastly, anxiety of cultural identity. Saying that the BJP carefully addressed these by giving perceptions of strong leadership through Narendra Modi, Gujarat Model and assertion of majority Hindu identity, Yadav said Amit Shah’s “Election Machine” was fully responsible for creating the wave and translating it into votes. However, he also added, rather optimistically, that emergence of the BJP as the new Congress and shrinking of Congress has provided a never-before chance of creating “alternative politics through social movements and agitiation.” Ahem.

At Wankhede stadium when 30,000-strong crowd cheered the swearing-in of the new Chief Minister Devendra Fadnavis, one person was sorely missed. Govind Rathod, a newly elected BJP MLA from Mudkhed constituency in Nanded. While he was on his way to Mumbai in Devgiri Express on 26th night for the meeting scheduled on Tuesday to elect the chief minister, he experienced chest pain and collapsed. The incident occurred somewhere after crossing Jalna. Reports say Rathod won by a margin of 73,291 votes defeating Congress’ H.B.V. Patil in a Congress dominated region. His sudden death has not shocked the family and party members but it also reduced BJP number tally. As they walk the tight rope walk of forming a minority government with outside support of NCP and neither-inside-nor-outside support (or opposition?) of Sena, every single member counts.

No One Killed Dalits

And before one could mourn the natural death of a political leader, wonder how to deal with yet another Dalit killing in Ahmednagar district. After ruthless murder of a teenager few months ago, on October 21 three members of the same family were found murdered. Bodies of two males members, Sanjay Jagannath Jadhav (42) and son Sunil (19) were hacked to pieces and dumped in a well. Mother Jayashree, 38 too was dumped in the same well. Dalit rights groups have been protesting and political parties too have started making noise about the fact that there has been no breakthrough in the case. There have been no arrests and the police are still grappling with what could have been the motive. However, reports say the murders could not have been sudden and were pre-planned.

And to end on a slightly happier note, after a successful run of the Mumbai film Festival, Tata Lit Fest is on at NCPA and Prithvi Theatre simultaneously. Also the renowned Prithvi Theatre Festival is back again. After the season of religious festivals, as we mark the end of solemn and sombre Moharram, the season of culture festivals has begun. Here is to music, dance, poetry and culture. Small point to be noted, since Kala Ghoda Fest went to the Hindustan Times last year, the Bombay Times has got an equally attractive Prithvi fest under its belt. Here's to the sponsors.