A weekend that lasted 10 days With Tata Literature Live, MAMI film festival and the Prithvi Theatre Festival, culture vultures are feeding on a problem of plenty… 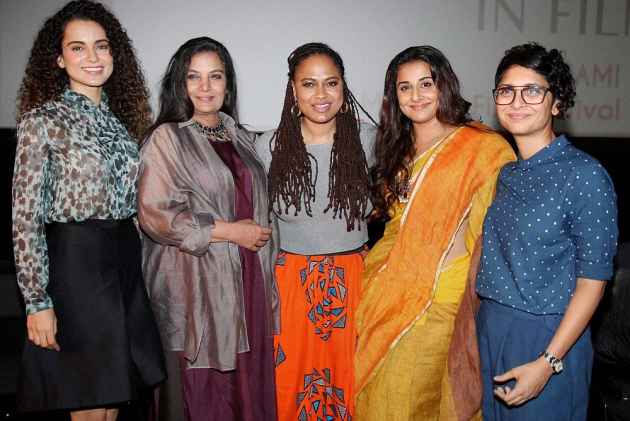 When you have Germaine Greer, the famous feminist, who wrote the iconic The Female Eunuch, doing nearly a session a day at the Tata Literature Live Festival, there is no dearth of exciting moments. It all started with almost thunderous applause at the opening session with Vikram Seth, where both joked about the topic of the session, “Can books change the world?” and spoke about their own preferred tangents. Germaine spoke about how right to abortion may not have been necessarily an exclusive women’s movement’s success but had a corporate hand in it too. As if that did not ruffle feathers, her closing address seemed to unleash some provocative as always but slightly questionable views. However, the fun session seemed to be the interaction with Mona Eltahawy, Shobhaa De about “Will women always be the second sex?” at Prithvi Theatre, where again she expressed her controversial views saying she doesn’t believe that transgender women were women. However, she also managed to shush Javed Akhtar when he insisted that the solution to women’s problems lies in mothers raising their children as atheists.

Greer, with her animated expressions, ability to mimic “accent of British girls trying hard to be girly and playing down their intelligence,” and deep insights into influence of the corporate world on environment and women’s rights, had her fans captivated. However, the more objective ones were open enough to point out that she seemed increasingly obsessed with the treatment of the old women in the UK and out of touch with realities of India and that there was not much
to achieve by giving any leeway to unfair practices such as female genital mutilation and sex selective abortions in the name cultural complexitities… Hmmm…

How much is too much

With more than 60 sessions spread across four days at the NCPA and the Prithvi Theatre, audience was not spoilt for choice but was torn apart and worried sick wondering if the parallel session at a parallel venue was better than he or she queued up for. While the opening session was a bit of dampener with Vikram Seth and Germaine Greer both making witty jokes but not really discussing the topic at hand, their independent sessions were a hit for multiple reasons. Then there was Nayantara Sehgal disagreeing very politely with Vir Sanghvi and Anil Dharker over their views during the Chacha pe Charcha, a session on Nehruvian legacy. Of course, the news of Anupam Kher getting booed and him snapping at Shobhaa De made it to front pages but the sessions on Urbanisation and literature, fiction and history and inequalities of our times, had people like Kiran Nagarkar, Harsh Mander, Mahesh Rao, Yash Das, Rajdeep Sardesai and many many more discussing several aspects of intolerance and ideas about participation of the civil society. However, a very integral part of the festival was the creative performances by national and international groups, where the written word transformed into a magical experience, as in the case of “When it rains” a Canadian play, a black comedy, with the most stunning use of light and silhouettes.

How I wish I had clones, to attend multiple shows and to do my regular reporting on the Sena-BJP spats!

Shhhh festival is in session

When you have travelled across the city, queued up in the muggy humid sun and finally managed to get into the session to watch the author, speaker you have admired for ages, the last thing that you can bear is a mobile phone going off. Most of the audience came from an educated if not elite background and one wonders what would it take for people to come on time, not look for favourite seats in the dark and stumble over others and most importantly, not have loud, bizarre ringtones which they do not manage to silence before actual, real people in flesh and blood, who might get distracted, take the stage. I was particularly bothered by audience at Prithvi Theatre seated in the front putting their feet up on the stage and blatantly ignoring the notice saying one is not to do so. Also slightly irritating were those who would take the mike in a measly 15-minute question and answer session after every panel discussion and go on rambling about their take on the issues instead of asking an actual question. By the end of the fest moderators seemed to have picked on it and in one such session Kalpana Sharma asked a mike-grabber if he had a question or a comment and decided that he had to pass. Just as well, because that allowed other young students a
chance to ask their simple but sincere questions.

The MAMI that wasn’t

Cinema lovers, especially the world cinema aficionados and students of cinema and those in the early stages of a film/theatre career were relieved when Reliance Jio announced sponsorship for city’s own film festival, the MAMI film festival, because the festival had run into financial problems and was not able to sustain. It seemed like a “sone pe suhaga” situation when the likes of Karan Johar, Kiran Rao and PVR Cinemas associated with the festival. However, the festival turned out to be an assortment of chaotic things. Most of us were used to not getting catalogues on time when it was a sidha sadha festival with old and young jholawalas lining up, somehow knowing about the films that were listed on the schedule. Curated by Shyam Benegal , Kiran Shantaram and Sudhir Nandgaonkar the only assurance was rare cinema on display. However, at PVR Citimall in Andheri, people gathered with no online booking, started fighting with the organisers, the media desk remained unmanned for the entire two and a half hours that I tried to figure out some entry. Having a delegate pass was no longer enough, the shows got cancelled and the uninformed, dispassionate staffers of bookmyshow and PVR cinemas were wondering what hit them with people scolding them sharply for assuming that they would sit for a substitute show instead of the one they cancelled without prior notice. While some actors tried pulling strings and some other old school ones offered to surrender their delegate passes and leave, many others were trying to redo the bookings on their bad networked phones.

After trips to the fancy Juhu and Andheri PVR, I finally found peaceful screenings at the not-so-upmarket Ghatkopar mall. By day 3 people seemed to have figured the bookings (or had simply dropped out!) and youngsters were queuing up for films in the good old way. Due to security reasons delegates were made to exit all the way out of the mall after every screening and had to make a fresh entry. Not to mention the prices at multiplex, Rs 250 for a samosa and a coffee. MAMI was about making world cinema accessible to passionate buffs in affordable way. I hope people catch up with the new format soon. But tell me, how can anyone explain, Varun Dhawan taking a session on how he became an actor! All in all ample material for a black comedy I think.

Everything else and Garm hava

Of the four or five films that I managed to catch at the festival anyway, and they were all striking in their own way, what seems to have stayed with me was the restored classic Garm Hava by MS Sathyu. Films such as The Head Hunter, which looks at life of a tribal lured away from his home that he fiercely guards alone, so that a road is built through the breath-taking jungle; From Afar and Krisha which look at less than predictable human emotions and behavior arising out of rough relationship equations, Dheepan that throws light on life of a refugee/victim of the Sri Lankan civil war in France the country of his refuge, it was a treat nonetheless. While all these films connected to the realities of our times, nothing touched me more than the simply told and marvelously enacted story of a Muslim family that refuses to leave home in Agra after Partition and Mahatma Gandhi’s death. And even as what the family of Balraj Sahani goes through in the times of Garm Hava after 1948, you can’t but notice the direction in which today’s winds are blowing and one wonders if things have taken a turn for the worse…

There is a line where Sahani is insisting that a businessman has no religion after bagging a tender for making shoes and his relative who has followed up with the process simply says, “There is one thing bigger than religion. It is bribe.” Sahani goes silent. And so did all of us in the theatre…

In the meanwhile, Shiv Sena and BJP are planning to come together after getting 52 and 42 seats respectively in the Kalyan Dombivli Municipal Elections (so much for going solo!) and the Congress party is planning a statewide agitation about prices of Dal and Diwali is around the corner.

And keeping with the mood of the hour, the lovely Prithvi Theatre Festival, with more than 25 performances including those on Kabir’s poetry, Rambo circus and plays by Lillette Dubey, Mohit Takalkar, has just started. Happy Diwali!