Activists say the Village Forest Rules are in direct contradiction with the Forest Rights Act, which recognises the community ownership of forests by the tribals. 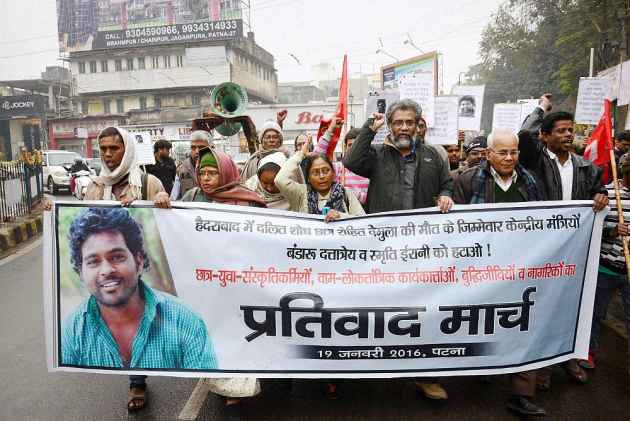 Rohith, you are not alone

Not just Dalit organisations but several other human rights associations and activists and students' groups have come forward to register their protest against the suicide of Dalit student Rohith Vemula at Hyderabad. According to reports around 40 such spontaneous protests have taken place at various colleges and public places. There were also reports of a protesting group being attacked by RSS sympathisers. A larger and more organised demonstration is planned for February 1 by multiple students' groups and is likely to be supported by Prakash Ambedkar.

In the meanwhile, our very own Ramdas Athawle was reportedly heckled by students in Hyderabad for being part of the government. At a protest organised by the SFI at Dadar station, Dhammrakshit Randive was one of the participants. And he told Outlook, "We have to go to every nook and corner and reclaim the diversity advocated by Kabir and Ambedkar. We have to do this for Rohit and we have to do this for human freedom. We need to do this urgently without waiting to decide whether it should be under a red flag or a blue flag."

Despite all the noise, I can't help but add that many students who we approached for their comments refused to come on record or share their names because they feared backlash from authorities in their respective colleges. That perhaps is an indicator of how much of Dalit oppression is still under wraps.

Even as India and Maharashtra get ready for the flagship event for Make in India next month, Bharat Jan Andolan and many other tribal rights activists are trying to draw attention to what they call a sly implementation of the Village Forest Rules, an attempt by the state government to provide training and assistance to tribals dependent on forest produce but in the process also controlling the forest through a joint forest committee.

Activists say the Village Forest Rules are in direct contradiction with the Forest Rights Act, which recognises the community ownership of forests by the tribals. As the letter sent to the Ministry of Tribal Affairs by BJA says, "We are further very distressed to gather that recently there have been moves to revive the VFR by Maharashtra with small amendments, and also to replicate the rules in neighbouring states. Even more serious is the cloak of 'secrecy' which is surrounding the entire discussions which are going on among the Ministries regarding this issue which affects more than 15 million STs and OTFDs in Maharashtra alone." A reply from MoTA is eagerly awaited.

While many in the journalistic circles remember Aroon Tikekar as former editor of one of the most influential Marathi dailies, Loksatta, he had an equally illustrious academic career. Author of many books, not just about the media, Tikekar passed away because of a severe heart attack at his residence on January 19, an unfortunate and unexpected shock at the start of the year. As Girish Kuber, current Editor of Loksatta, wrote, "Tikekar has passed away at a time when society is witnessing a rapid de-intellectualisation and the space for independent, liberal thought is shrinking. With his demise, we have lost a classical liberal intellectual."

He had an important stint at the Asiatic Society, which has a splendid library, (also perhaps more famous for its steps that feature in many films), and he always encouraged journalists like me to become members and pursue reading. He would often say that he resisted all television invites and was happy to write and chat. But for me, I remember him as someone who signed a letter, a sort of personal guarantee, for me, a trainee journalist at the Indian Express, to accompany a senior Loksatta reporter who was covering the Kashmir crisis in 2002. An unmistakable old school editor. RIP Sir.

Pen is mightier than politics?

Usually the Annual Marathi Literary Meet or the Akhil Bhartiya Marathi Sahitya Sammelan, is in the news over its choice of venue or election of the President. However, this time, Shripal Sabnis, the President for this year's meet, held at Pimpri Chinchwad near Pune, kicked up a storm over his remarks about Modi well before the event. The event which had all political luminaries' attendance, was orchestrated carefully to avoid any face offs. While Fadnavis attended the inauguration he left before the Sabnis' speech, the most awaited part of the three-day meet. Not just that, the speech which was as forthright as his previous remarks, was not circulated in print, as is the practice. Sharad Pawar too commented that writers should not politicise issues. Ahem, looks like the man touched many a raw nerve. And yes, it seems there was a record book sale too crossing Rs 4 crore. Time to discover writings of Shripal Sabnis now.

Is Bollywood finally sticking its neck out? While glitterati may be busy discussing the latest split of Farhan and Adhuna Akhtar, the man of the hour is Karan Johar, who is the latest to talk about intolerance. Speaking at the Jaipur Literature Festival, he said in an interview, "Look what happened as a result of anyone who said anything on it. I make movies, I'm fighting megalomaniac movie stars everyday. Do I need to fight the governance? We're fighting the censor with every film. You write anything, you can't say anything. How are we democratic then?" he posed. He also added, "Freedom of expression is the biggest joke in the world... Democracy is the second biggest joke I think," reported the Times of India.

Johar also spoke in support of decriminalising homosexuality. However, it had its equal and opposite reactions. While Ashok Row Kavi criticised him for not supporting the LGBT community when it was necessary and filmmaker Prakash Jha took on Johar saying "intolerance was in his mind." Oh and yes, Johar's biography An Unsuitable Boy is releasing soon. Will it be like his witty self in AIB Roast or will it gooey mushy like K3G?

And even as the fight, legal and social, for decriminalising homosexuality goes on, a heartening effort by the Wings Travels and the Humsafar Trust is already underway. A joint venture radio taxi service has been started on pilot basis where transgenders would be trained to be drivers and will be able to have a vocation that does not involve traditional begging or dancing at functions. It is expected to start services in 2017. Can't wait to get on a long ride through Mumbai traffic while listening to stories of these cabbies.

Eat, drink and be merry

It is that time of the year when the queen of suburbs, the very posh Bandra welcomes self-help groups from all over Maharashtra and a few other states. With over 400 stalls selling delicacies and ingredients that one can find only here and only at this time, and that are organic and natural, it is time to indulge and binge and stock up on hurda, thecha and manda and so on...