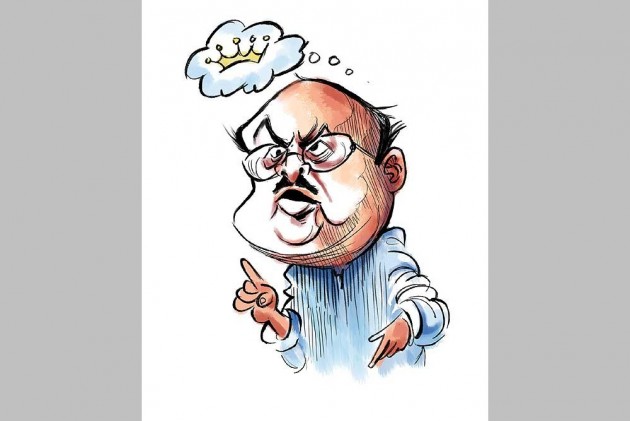 Chagan Bhujbal is currently lodged in Arthur Road Jail, for his alleged misappropriation of funds in the well-documented Maharashtra Sadan scam. Apart from making impassioned speeches addressed to the judge himself, his latest application for interim bail also made news. He requested some time off on the occasion of Holi so he could spend time with his family and friends. However, the judge turned the request down. It is common for accused, undertrials and convicts to try for interim relief citing urgent or emergency situations. Holi, is just not one of them. In the meanwhile, Sharad Pawar has said the arrests (of Chagan and his nephew Samir) are due to political vendetta and the decisions were not taken by Bhujbal alone. Supriya Sule has visited him in jail too.

The Aam Aadmi Party, which doggedly followed this case and routinely sends out all updates promptly on this case, is now waiting for the real big case to begin. Rumours/reports about action against Ajit Pawar in the stupefying irrigation scam worth Rs70,000 crore, have been doing the rounds and despite BJP's assertions that no one will be spared, there hasn't been much movement on that case.

And while law prevented Bhujbal from playing holi, patriotic MLAs across political parties, got MIM MLA Waris Pathan's suspended through a spontaneous motion, for refusing to say Bharat Mata Ki Jai. In an atmosphere where slightest reference to anti-national evokes major reactions, his refusal made everyone, including the Congress, so angry that they all supported the motion to suspend him through the Budget Session till April 17. Pathan stuck to his guns and explained time and again that he loves his country and he was fine with saying Jai Hind and that the constitution did not require him to say Bharat Mata ki Jai.

The German Bakery blast accused Himayat Baig was a relieved man after his death sentence was set aside by the Bombay High Court. He was acquitted of the terror-related charges under the Unlawful Activities (Prevention) Act. However, his conviction on charges of possession of explosives such as RDX was upheld and was sentenced to life imprisonment. He has earlier pleaded before the Pune court that he was the 18th victim of the case. On February 13 2010, 17 persons died, when a bomb exploded at the German Bakery in Koregaon Park, a popular hangout for foreigners in an upscale locality. The Osho Ashram is just a lane away. Since this was the first major attack after the 26/11 carnage in Mumbai, it had attracted tremendous attention and the Anti-Terrorism Squad had relied on two confessions and CCTV footage. However, that was rejected by the High Court as the two witnesses had moved court saying they were "coerced" into confessing. Ashish Khetan, now an AAP member, had done a sting operation to this effect.

Not a drop to drink

There have been many predictions about water wars in the world, but right here in our backyard the government had to impose section 144 to prevent a law and order situation. In Latur city, which has been receiving water once in a month, the government imposed the section which prohibits assembly of more than five persons near the six water treatment plants. They anticipated that fights over water may go out of control. The question is how the situation went so out of control wherein people have been deprived of potable water, a fundamental right, for days and weeks on end. With March temperatures soaring above 35 degrees already, Latur is just the first of many places in Maharashtra that is on the boil. Amidst all this the only ray of hope is announcement of monsoon on June 3 by the Met Department. The government has also announced that they would be supplying water to Later, late Vilasrao Deshmukh's constituency by railway.

And David Headley is back in the news. Through video conference deposition in the case of Abu Jundal's involvement in the 26/11 attacks, Headley has again stirred controversy, knowingly or unknowingly, we will never know. He said that the plan to assassinate Bal Thackeray was a real one but the man who was supposed to execute it was not only arrested by the Mumbai police but he also managed to escape after some time. He also said that he never spoke about Ishrat Jehan because he was never asked about it. Moreover, he said he never liked India because of an airstrike by India in 1971. He refused the suggestion than the US authorities knew that he was an LeT operative. After the special PP Ujjwal Nikam relayed this information, expected reactions have happened from the Sena and others. And the court seemed to have enough of examination and cross-examination by Wahab Khan, and has concluded the Headley chapter. How it plays out the actual trial and the verdict, we do not know.

Last week Mumbai saw two sets of guests, both requiring interpreters and both raising very important issues about nuclear energy. A three member team from Japan, two of them affected by the Fukushima Nuclear Reactor accident, spoke during a public meeting organised by the Coalition for Nuclear Disarmament and Peace. Five years since the Fukushima accident, which was triggered by a tsunami, Masami Yoshizava continues to look after 330 cattle without any government aid in his village, which falls in the total evacuation zone. Mizuho Sugeno, an organic farmer whose village is just outside the zone, has doggedly pursued farming and has employed several techniques to decontaminate the soil. Despite being largely successful in growing contamination free produce, the business is not the same. Not only are they against any nuclear power reactors in Japan but they also said that India too should steer clear from setting up hazardous reactors.

Whatever the governments, present and past, may say about this impassioned plea, it was the celebration of struggle against the Koodankulam Nuclear plant at the launch of writer Minnie Vaid's book, The Ant in the Ear of the Elephant, that drove home this point on the same evening. Sundari and Milret spoke in Tamil and narrated their experiences of the struggle apart from talking about the sedition cases against the protestors. Actor Nandita Das, senior journalist Kalpana Sharma and publisher Meera Johri not only commended the feisty women but also underlined the importance of having space for dissent.

Get trapped in Pinjra

Even as the Marathi cinema that took everyone by storm since the making of Shwaas a decade ago, seems to have slowed down with more commercial releases and tacky romances, an old classic released this week. Pinjra, is an iconic film, comparable to perhaps the likes of Pyaasa in Marathi. Made by V Shantaram, it is a story of upright school teacher who challenges and tries to change a Tamasha girl, Sandhya and ends up being her puppet in an inevitable turn of tragic events. The film, an adaptation of a German film, has power-packed performances by Sriram Lagoo, the protagonist, (who has played the heroine's father in several Hindi films but a stalwart on Marathi theatre), Nilu Phule and Sandhya, who acts and dances like no one else. The songs, mostly sung by Usha Mangeshkar, will still tug at your heart and make you tap. You will be surprised to see how far the filmmakers were prepared to go in the 1970s in terms of ideas of jealousy, lust, revenge, love, regret and destiny in human behaviour and society.