As the final approaches, a look at why cricketers and cricket fans continue to be a superstitious lot. 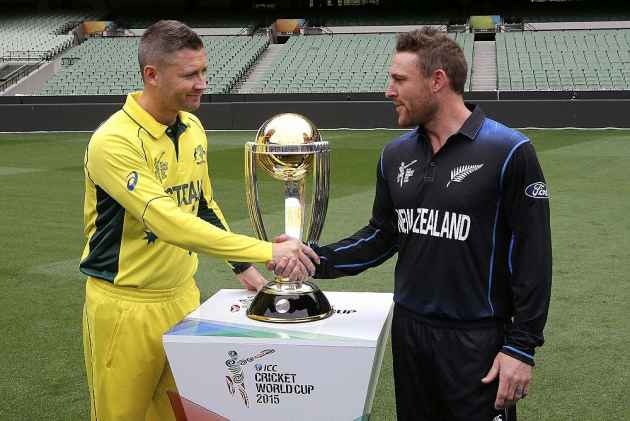 The illuminated bails and stumps were a great new addition to this World Cup, although they have featured in T20 matches since 2012. An Australian invention, they are equipped with LEDs that come on in 1/1000th of a second as soon as a ball hits the stumps or the bails are dislodged from the grooves in which they sit. A long cry from the days when an umpire's eyesight and flapping arms were all one had to go with in the matter of decisions. The inventor Bronte EcKermann had promised Dhoni a stump if India won. And despite India's crashing exit in the semifinal, it is almost certain that the stumps will fly back with some of the Indian cricketers.

But as Indians, both residents and visitors, slowly recover from the disappointment of that defeat, both Australia and New Zealand are obviously looking forward to Sunday's final.  It is worth keeping in mind that Australia (Population 23 million and spread across over 7 million square kilometers)  has been a cricketing country for far longer than New Zealand (Population 4 million spread across just over 2 lakh square kilometers)  where it is Rugby that is the more popular sports. To put Australia's size in perspective, it is almost two and a half times the size of India.

But for anyone in New Zealand that grew up playing cricket in their back yards, beating the Aussies has always been the primary goal; a bit like playing cowboys and Indians. Tim Southee is no stranger to this, having referred to Australia as 'big brother' twice in the course of interviews in the lead up. There is always an extra spring in a Kiwi's steps when going out to bat against the Aussies or thundering down the crease to try and get the Aussie top order out in record time.

What Clarke and his men will not like thinking about is the woeful way they were all sent packing for 151 in Auckland by the Black Caps. The Aussies are seeing it as a timely reminder to stay focused and were in fact jolted out of complacency by the loss.

Cricketers and cricket fans continue to be a superstitious lot though even in Australia. Australians for example dread the number 87 which is not only 13 short of a century but also a bit of a juju for its batsmen. It all started in 1929 when Keith Miller watched Bradman being bowled by Harry Alexander for 87 while playing for New South Wales against Victoria. The ten year old Miller began looking for other scores of 87 and found enough to convince himself and later players like Benaud that the Devil was real enough. The curse continues to this day as Geoff Marsh and his son Mitchell Marsh both found out in 1988 and 2014 respectively.

Neil Mackenzie of South Africa takes the cake though among recent players with his refusal to step on white lines (near impossible in this game), putting down all toilet seats in the changing rooms before batting and strangest of all, taping his bat to the ceiling. Yes, you read that right, bat taped to ceiling.

Others have spoken of not indulging in roast duck and uniquely, banning their children from playing with rubber ducks in the bath while the tournament is still on. There actually may be some justification to this last one as the duck or a score of 0 is in fact the score that most batsmen are likely to finish on if they are unlucky on the day, according to no less an authority than the Cricketer magazine.

Today's cricket is not all mumbo-jumbo though. Advanced science is doing much to make sure the players play well and that viewers at home get an experience as real as being at the game. An example of this are the Australian players who are using futuristic thermometers swallowed in tablet form during extreme heat conditions so that their core temperatures can be tracked and certain players are being hydrated by supplying them with special ice blocks during breaks. Playing at the height of summer can mean core temperatures of 38 degrees and in Mitchell Johnson and Glen Maxwell this can go as high as 40.5. This can mean having 10 degree submersion baths before and after matches and hotel rooms set at 18 degrees for the two on hot days of which there have thankfully been only a few this summer.

The absence of England from the latest stages of the CWC typifies the changes to the way the game has been played lately. For a game once thought to be an ode to the English character and typical of what an orderly and sensible race of people would do in order to amuse themselves on a lazy afternoon, cricket has certainly moved far from its origins. In fact it is now filled with more of the volatile spirits of the Irish and far less of the phlegmatic caution of the Scotsman as James Pycroft once described in one of the earliest books on cricket, The Cricket Field, written in 1851.

Although, looking at the current Cricket World Cup the Scots are nowhere to be seen having lost all their matches, three at the hands of nations that were taught cricket as part of a colonial need to succeed in civilising the far flung parts of Empire; and Ireland has retired after showing some early promise with three wins, one over the once great Windies.