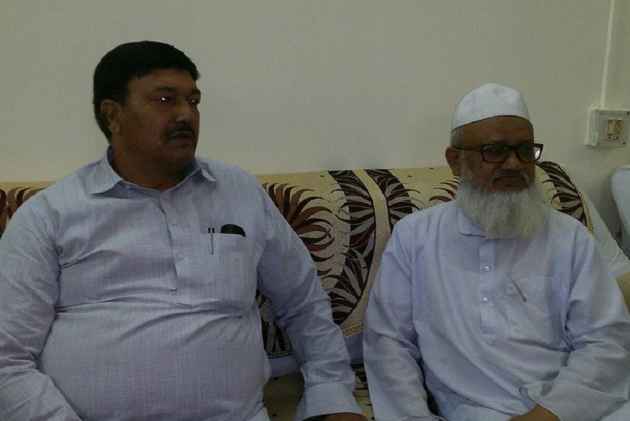 It happens all in a day. Khurshid alias Feroz Ahmad, a Muslim JD(U) MLA of Bihar, received excommunication threat for chanting 'Jai Sri Ram' and Bangladeshi writer Tasleema Nasreen was not allowed to enter Aurangabad by AIMIM partymen.

Khurshid drew the ire of a senior cleric who said he stood "expelled from Islam" for his action.

Ahmad enthusiastically made the chant after Chief Minister Nitish Kumar won the trust vote on July 28.

Khurshid was later inducted into the ministry and now holds the minority welfare portfolio.

"I worship both Ram and Rahim. I don't have any hesitation in saying Jai Sri Ram if it is in the interest of the people of Bihar and benefits them," Khurshid later told journalists, proudly displaying the red Hindu sacred thread called Kalawa or Mouli on his wrist.

Later he apologised saying that he didn't abuse anyone.

"I apologize to anyone who was hurt. I didn't abuse anyone. No one asked me what's in my heart," said Ahmad to ANI.

Khurshid's secular protestations did not go down well with the Muslim clergy and some politicians but his own party backed him.

Sohail Ahmad Qasmi, the Mufti of Imarat Shariah, Patna, said, "Any person who says he worships both Rasul and Ram, bows his head before every faith, then shouts 'Jai Sri Ram', that person is automatically expelled from Islam."

Khurshid also drew criticism from senior RJD leader and former minister Abdul Bari Siddiqui, who said it appeared that the minister had got the "badshahat" (kingdom) somewhere.

NCP leader and former union minister Tariq Anwar said it showed that the minister can stoop to any level to grab power. "People will teach a lesson to such people," he said.

Khurshid said Nitish Kumar asked him to reconsider his statement if it hurt sentiments of people and tender an apology.

JD(U) spokesman Neeraj Kumar defended Khurshid and said the slogan raised by him was not intended to hurt anyone's religious sentiments.

"This is the country where great personalities like Mahatma Gandhi used to take the name of Ram and Rahim in the same breath. This a conspiracy to finish the Ganga-Jamuni (inclusive) tradition," he said.

In another incident, controversial Bangladeshi writer Tasleema Nasreen was not allowed to enter Aurangabad following protest led by AIMIM legislator Imtiyaz Jaleel outside Aurangabad airport. Protestors also gathered outside the hotel where Nasreen was supposed to stay in during her visit to the city.

Nasreen had landed at the Chikalthana Airport on Saturday evening  from Mumbai.

Police stopped the author from stepping out of the airport, where a crowd had gathered shouting slogans like "Taslima Go Back".

Deputy Commissioner of Police (zone-II) Rahul Shrirame said Nasreen was sent back to Mumbai by the next flight to avoid any "law and order problem" in this city in central Maharashtra.

The author was advised to abandon her visit to the city. Nasreen was planning to visit the world heritage sites of Ajanta and Ellora besides other tourist spots in Aurangabad.

Jaleel said her writings have "hurt" the religious sentiments of Muslims across the world. "We will not allow her to step on the soil of our city," he said.