The goal of the International Day For The Elimination Of Violence Against Women is to raise awareness about the fact that women all around the world face violence. Here are a few Bollywood films on the same topic. 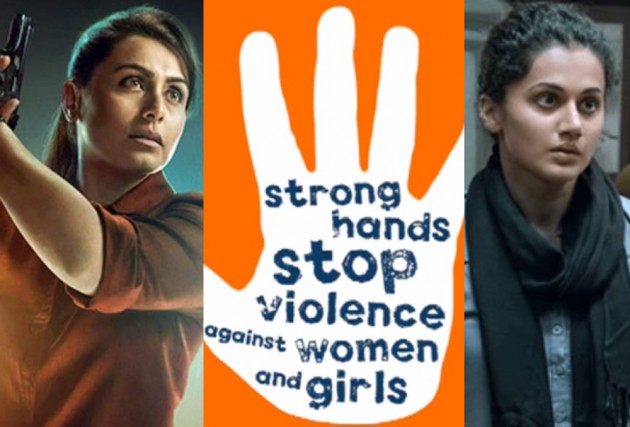 The International Day for the Elimination of Violence Against Women has been declared by the United Nations General Assembly on November 25.

The day's concept is to raise awareness of the reality that women all over the world are victims of rape, domestic abuse, and other types of violence; also, one of the day's goals is to emphasise how the scope and the actual severity of the problem are frequently suppressed.

For decades, Hindi film has served as a mirror, reflecting the periods and events that the country has faced. From the 1960s through the 1990s, a staggering number of prominent Bollywood films included explicit depictions of rape with lustful villains and hapless heroines. Women have gone a long way in our movies, from being ornamental objects, if not victims or martyrs, to being a formidable force.

The goal of the day is to raise awareness about the fact that women all around the world face violence. Things have changed and it can be seen in films like 'Pink,' 'Thappad,' and 'Guilty,' which deal with consent, domestic abuse, and society's handling of rape survivors, as well as sexual assault against women.

The Hindi cinema actress has evolved from the 'abala naari (hapless woman)' to a woman of substance and power who battles for her rights, speaks up against injustice, fights for her dignity and self-respect, and rebels when necessary.

On the occasion of the International Day for the Elimination of Violence Against Women, we present a few films depicting women rising from the ashes like the phoenix:

Rani Mukerji leads in the 2014 film 'Mardaani,' alongside Jisshu Sengupta, Tahir Raj Bhasin, and Saanand Verma in supporting parts. Shivani Shivaji Roy is a police officer whose interest in the case of an abducted young girl leads her to unearth secrets of human trafficking by the Indian mafia.

The 2019 film 'Manikarnika: The Queen of Jhansi' is based on the life of Rani Lakshmi Bai of Jhansi. Kangana Ranaut plays the protagonist in the film. The film did successfully, earning the best first-weekend receipts in India for a female-driven picture.

The 2020 film 'Chhapaak' is based on the life of acid assault victim Laxmi Agarwal. It stars Deepika Padukone as a character inspired by Agarwal, as well as Vikrant Massey and Madhurjeet Sarghi.

Taapsee Pannu, Kirti Kulhari, Andrea Tariang, Amitabh Bachchan, Angad Bedi, Tushar Pandey, Piyush Mishra, and Dhritiman Chatterjee star in Aniruddha Roy Chowdhury's judicial thriller 'Pink.' The plot centres around a sexual assault victim who is being unfairly prosecuted for the attempted murder of her assailant and is being represented by an elderly retired lawyer.

‘Thappad’ is more than simply a rambling tirade about borderline domestic violence; it exposes the years of conditioning that a woman is exposed to by her own family and the culture in which she lives. Taapsee Pannu stars in the flick.

This 2006 film, starring Aishwarya Rai Bachchan, was a type of eye-opener, shedding attention on the physical and mental suffering that women face in violent marriages. The storey is partially based on Kiranjit Ahluwalia's life, who ended up killing her violent husband after being married to him for ten years. The film, which also starred Naveen Andrews, Miranda Richardson, and Robbie Coltrane, received widespread acclaim.

Wait until you see 'Agni Sakshi' if you think possessiveness is nice. The storey revolves on a possessive individual who is madly in love with his wife Madhu. Everything is normal until his love becomes aggressive and escalates into domestic violence. Nana Patekar and Manisha Koirala played the key parts, and Jackie Shroff played a significant role in the film.

After delivering a spectacular performance in Rakesh Roshan's 'Khoon Bhari Maang,' Rekha became an inspiration to all women who had been in an abusive relationship. In the film, she plays a widow who is duped by Kabir Bedi into believing he is the guy for her in order for him to steal all of her money by murdering her. She lives, though, and returns seeking vengeance.

In this film, Raveena Tandon plays a victim of marital rape. In the film, the actress, who is in an abusive marriage, chooses to flee with her kid. When her spouse pursues her, she murders him in self-defence. Raveena won a National Award for Best Actress for her performance in this Kalpana Lajmi film.

The dowry system, which is still widespread in society, was prominently featured in 'Mehndi.' In the film, Rani Mukerji, who is married to Faraaz Khan, is a middle-class woman who loves her husband and family totally after their marriage. When the groom's family does not get the agreed-upon amount of dowry, they begin tormenting Rani's character. They not only mistreat her, but they also subject her to physical and emotional torture. They even plan to murder her. Instead of accepting it, Rani's character vows to give her husband and in-laws a life lesson.

This Rajkumar Santoshi film follows the lives of four women: Vaidehi, Janaki, Ramdulari, and Maithili, all of whom have experienced abuse in some form or another. The film, on the other hand, showcases their energy and tenacity as they battle for their rights. Manisha Koirala was in it. The key characters are played by Jackie Shroff, Madhuri Dixit, Rekha, Ajay Devgn, Anil Kapoor, and Mahima Chaudhary.