Thirteen questions the two contradictory Dadri forensic reports, one dated September 29 and the other dated October 3, throw up. 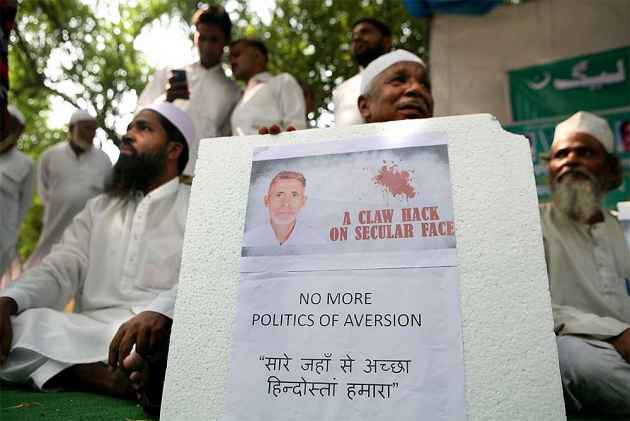 A mob broke into the house of Md Akhlaq at Dadri on September 28 last year and lynched him to death. His son sustained serious head injuries but survived. While the mob claimed to have been outraged by 'proof' that Md Akhlaq had been consuming beef at home, no beef was apparently found in the house. Even Uttar Pradesh Police claims that the only sample it collected was from a garbage bin at a distance from the house after being directed there by the villagers. Police claims there are eyewitnesses who have signed to certify from where the sample was collected. The lynching made international headlines and 17 people arrested for the lynching are still in prison while the trial is on in a court in Greater Noida. 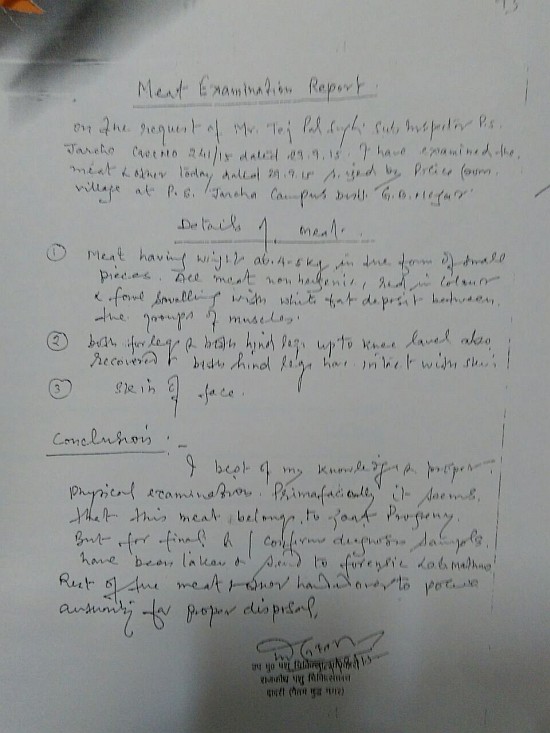 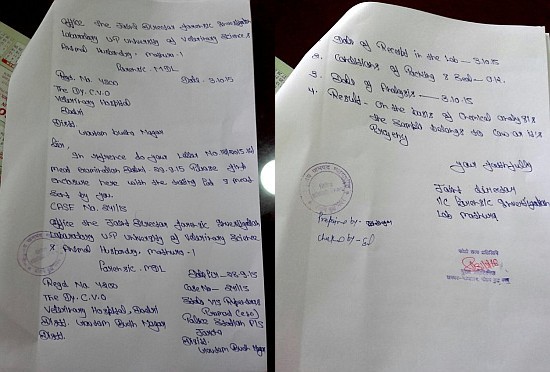 In the meanwhile, a plain look at the forensic lab report raises more questions than answers.

1. Why did it take seven long months for the forensic report dated October 3, 2015 to surface ?

2. Newspapers dated October 9, 2015 quoted official sources as saying that the sample collected from Md Akhlaq's house was reported by the FSL, Mathura as mutton. While it matches the date on the forensic report, has the original report been changed?

3. Even earlier, immediately in the aftermath of the lynching at Dadri on September 28, newspaper reports quoted official sources as saying that a visual inspection by a Veterinary doctor had established that the meat was from a 'goat progeny'.

4. This report stated that a physical examination on September 29, 2015 indicated that the meat 'belongs to goat progeny'. It also says that the sample comprised 4-5 Kgs of meat and that both foreleg and hind leg of the animal was recovered.

5. The family maintains that no forensic analysis is required to identify the foreleg and the hind leg of a goat as distinct from a cow.

6. The charge sheet in the case was filed in December, 2015 and the FSL, Mathura report was ostensibly part of the charge sheet. BJP MLA Sangeet Som had then said that he did not have any faith in any state government-supervised report. The question is that if the FSL report in the charge sheet was the report as the one which has surfaced now, why did Som and others not raise the issue then?

7. It is strange that the accused who have been filing for being freed on bail all this while would be ignorant of the content of the FSL report and apply for a certified copy only after eight months after the incident and five months after the charge sheet was filed.

8. The forensic report which has now surfaced is addressed to the Dy CVO, Veterinary Hospital, Dadri, which raises the question whether it was the police which sent the sample to the FSL or the Veterinary hospital ?

9. UP police claims the sample it sent to FSL, Mathura was collected from a garbage bin outside Akhlaq's house. Why was no sample collected from the fridge or inside the house then ?

10. The FSL report suggests the lab received the sample on October 3 and issued the report on the same day. Why did it take four days to send the sample from Dadri to the Lab two hours away ?

11. Although the report takes up two pages, the report is essentially a sentence : " On the basis of chemical analysis the sample belongs to cow or its progeny" it says. Is this how FSL reports are written? It does not even describe the sample.

12. While confusion prevails over the number of samples sent to the FSL, one or two, is anybody in a position to rule out the possibility of the sample having been switched ?

13. The family of Akhlaq insisted right from the beginning that they had consumed mutton, not beef. Why is there still no clarity on whether they had slaughtered a goat, received the mutton from a relative or bought it from a vendor ?