The Supreme Court had on November 12 rapped the Bihar Police for failing to arrest the former minister and directed the DGP to appear before it in person on November 27 if she was not nabbed by then. 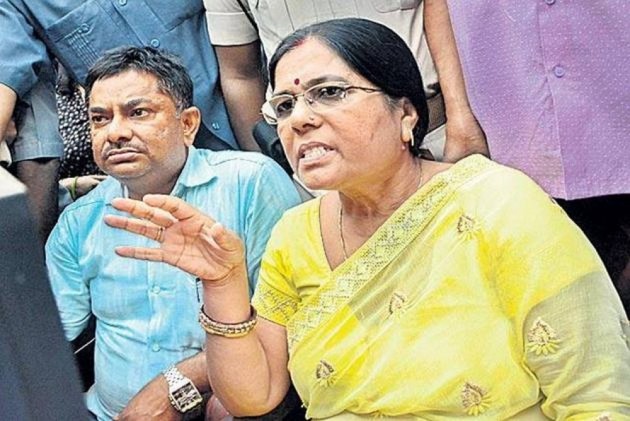 Former Bihar minister Manju Verma, who had been evading arrest in an Arms Act case lodged in the course of investigations in the Muzaffarpur shelter home scandal, surrendered before a court in Begusarai, Bihar on Tuesday.

Verma reached the court of the Additional Chief Judicial Magistrate Prabhat Trivedi in an auto rickshaw. She fainted as soon as she entered the court premises along with a few aides.

She regained consciousness after water was sprinkled on her face by bystanders after which she was taken into the courtroom.

The Supreme Court had on November 12 rapped the Bihar Police for failing to arrest the former minister and directed the DGP to appear before it in person on November 27 if she was not nabbed by then.

The Arms Act case was lodged against Verma following recovery of a huge quantity of ammunition from her residence during a CBI raid.

The Central Bureau of Investigation (CBI) had earlier conducted raids at 12 locations, including Manju's Patna residence in Begusarai, and seized 50 cartridges. Additionally, the CBI had also questioned former Bihar Social Welfare Minister Damodar Rawat, who was accused of having alleged links with Brajesh Thakur-- the key mastermind of the Muzaffarpur shelter home rapes.

On August 9, Education Minister Krishna Nandan Prasad Verma was given an additional charge of the Social Welfare Department, a day after Manju tendered her resignation from the post following allegations regarding the case.

Verma's resignation came a couple of days after Bihar Chief Minister Nitish Kumar assured that the culprits involved in the alleged incident would not be spared. The former state minister has been in the eye of the storm lately, after the opposition parties demanded her resignation over her husband's alleged involvement surfaced.

Chandrakant, on the other hand, allegedly used to visit the shelter home quite frequently, spending hours in the girls' room. However, the couple had denied the allegations levelled against them.

The issue of alleged sexual exploitation of more than 40 girls at a Muzaffarpur shelter home was uncovered more than a month ago by the Mumbai-based Tata Institute of Social Sciences. Later, 11 employees of the child shelter home were arrested in this regard.