In some fifty Shabana Azmi movies I've watched, I haven't come across anything else as? demanding as Ishk Ishk Ishk, Gaja Gamini, or the execrable Son of the Pink Panther?.?.. ? 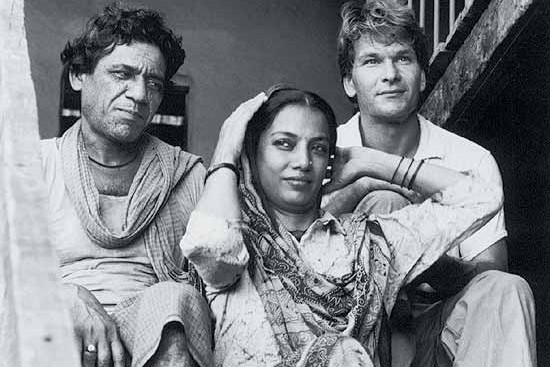 Sanjay Gupta's recent film Jazbaa was getting lukewarm reviews during its run last month, so? ? when I texted a friend that I was going out to see it, I expressed some reservations. "Two words,"? ? she wrote back, "Irrfan Khan."

I replied, "I think you misspelled Shabana Azmi." ??

Shabana Azmi was my gateway into Indian film, the sine qua non of my decade ­- long obsession.

With her poise and beauty, her accomplishments and principals and no­? nonsense approach to all?  aspects of her public life, she became my first love and has remained an all?-?time favorite.? And so I have watched a lot of movies for no reason other than that Shabana Azmi was in them.? Indeed, I've travel?l? ed more than 200 miles to catch a Shabana Azmi film that wasn't playing near? my city - ­ twice. The first trip was for Reema Kagti's clever and lovable Honeymoon Travels Pvt.? Ltd.; the second was Loins of Punjab Presents, a marvelously quirky movie by the late Manish? Acharya. Each of these was well worth the trip; they are terrific films in many ways, not just treats? ? for the obsessive Shabana Azmi completist.

Other films that I have watched primarily for her have not been quite so rewarding. Jazbaa? deserves the tepid reception it got; it is a weak and carelessly scripted thriller, with dialogues that?  are often embarrassingly ham­fisted. Still, there is pleasure, for a fan like me, in the sheer gravity?  that Shabana Azmi reliably brings to the screen in any role of a woman scarred and scorned. And?  it is far from the worst I have endured for the sake of my first filmi love.

That honour goes to Son of the Pink Panther, a grotesque misfire by the often brilliant Blake?  Edwards. In this embarrassing miscarriage of Edwards's Pink Panther franchise, Shabana plays? "The Queen", the scheming wife of the emir of Lugash, the franchise's favourite fictional Middle?  Eastern nation. The film is barely coherent, but near as I can tell The Queen engineers a plot to?  kidnap the emir's daughter, demanding a pile of cash in ransom and the emir's abdication. In his?  place she hopes to elevate her lover, the sinister, mustachioed leader of the Lugash military.?  What Shabana Azmi does in this sad pageant is look fabulous and vastly outclass every other actor?  she interacts with. But even she cannot make the film watchable, with dialogues like these:

The Queen: He knows that we are sleeping together.

General: Do you think that is all he knows?

The Queen: Yes, or by now you would be soup for my supper!

It's hard to imagine that another film in Shabana Azmi's impressive filmography could give this? atrocity a run for its money, but Gaja Gamini surely does. This work, supposedly an ode to his?  muse by the artist M F Husain, is a bizarrely amateurish paean to the objectification of women.?

Madhuri's character, the titular Gaja Gamini, incarnates through the ages as a series of mysterious,?  diaphanous women, each of whom resides high on a conceptual pedestal. Apparently, Husain's?  great vision of the Timeless Power of Woman is the limitless ability to sit around while men are?  inspired by them to shape the world with art, science, and culture.

The segment with Shabana Azmi is actually the least cringe?-?inducing of the lot. But here, too, a?  few minutes of Shabana Azmi doing the best she can with abominable material is not enough to?  save Gaja Gamini (though Madhuri, who so often elevates otherwise terrible movies into the realm?  of watchability, also gives it her best). Gaja Gamini is a lot to endure for love of one actor, with its? ? embarrassing melange of stupid dialogues, vapid concepts, and stiffly acted?  nonsense.

As Shabana Azmi's biggest fan, it's not just her award­? winning, mature performances that interest? ? me; I am equally drawn to the rawness of her youth, and the choices she made before her celebrity?  was cemented and before her commitment to social activism crystallised. Thinking of those early?  days, it is understandable that a freshly?-?minted FTII graduate would not turn down an opportunity?  to share the screen with a massive celebrity like Dev Anand. But the resulting film, Anand's vanity? project Ishk Ishk Ishk — Shabana Azmi's first mainstream role? — i? s a true test of my love.

The 1974 film was a box office disaster, with very good reason. Anand was about 50 at the time of? shooting, and his creaky movements, terrible toupees, and pancaked skin overshadow any traces of?  the charming hero he had been a decade or two before. Naturally, though, he attempts a young and?  energetic character, and romances not just a 23?-?year?-?old Azmi, but a 22?-?year? ­old Zeenat Aman,? ? too. This is a lot to stomach. Anand is not the first, and far from the last, aging hero to shoehorn? ? himself into age inappropriate circumstances, but it seems especially egregious here, in a film?  whose most watchable moments are unintentionally comical ones.

Shabana Azmi's brief role as?  vapid, pouty, and fickle girl does not do nearly as much to redeem the film as some hilarious?  footage of Kabir Bedi prancing around with an accordion does. ??

In some fifty Shabana Azmi movies I've watched, I haven't come across anything else as?  demanding as Ishk Ishk Ishk, Gaja Gamini, or the execrable Son of the Pink Panther. But a career?  that spans over a hundred films has its share of worse­than­average fare. I've tucked in to Shabana?  Azmi comfort food even in ordinary movies like the plodding Yeh Nazdeekiyan, where, opposite?  the utterly charmless Marc Zuber, she plays a type so common in her repertoire: the wronged wife,?  discovering her own agency in the ruins of a broken marriage. I've gritted my teeth through the?  cloying earnestness of films like In Custody and Morning Raga; the latter is populated with? ? wooden actors so far outclassed that it feels like Shabana Azmi giving a master class for a bunch? ? of amateurs. And, I've enjoyed her youthful turns in fun masala films like Amar Akbar Anthony?  and Parvarish.

But with stout heart I will make my way through the rest of Shabana Azmi's diverse and?  interesting filmography, because for every one of these, there is an Arth, an Ankur, a Godmother, a? superbly crafted piece of storytelling in which she owns the screen. Whether she is having fun?  playing farcical roles as in Matru ki Bijlee ki Mandola, or harnessing fierce melodrama as in? Jazbaa, I will keep watching, because even after enduring Son of the Pink Panther, you never?  forget your first love.