'My Only Motive Is To Fight For My Self'

'Violence and aggression against women is wrong, yet people try to point fingers at the woman who comes out with it trying to make her sound frivolous and with ulterior motive' 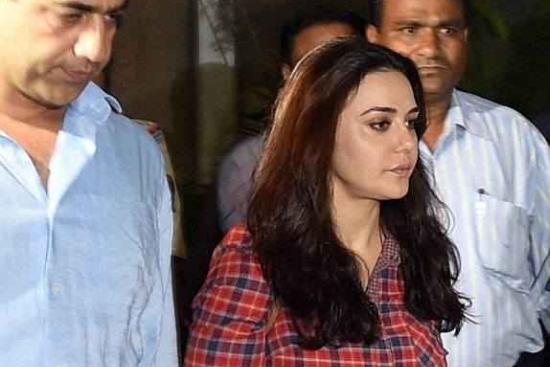 Sometimes in life one is faced with a situation that blows up in your face irrespective of which path you take. The last few days have felt like an emotional and moral roller coaster for me. What surprises me most are some of the reactions that i have seen or heard from people, friends and the media regarding this situation. Sadly in India the fairer sex has to have a larger limit, more tolerance and worry about what people will say irrespective of the facts and the truth.

I appreciate all the people who stand by me and support me but i must confess i am genuinely surprised and shocked at some reactions from people in general. My F.I.R IS VERY CLEAR yet its INTERPRETATIONS ARE MIND BOGGLING and there is so much speculation as to Why did i do what i did ? What was the motive behind my actions etc …… therefore this is my attempt to set the record straight.

Is this done for MONEY ? IPL was my project from the start and for the record not only did i pay for myself (5 crores)when i got into the IPL (bid) I paid for Ness too ! 5 crores ! (Proof of my financial commitment in the IPL is with the Bcci.) To be fair to him he did pay me back a couple of months later ( without any premium) so Hope the money theory is put to end once and for all. I have never taken ANYTHING from anyone now or ever in the past as I have a lot of self respect and pride myself for being self made and not motivated by other people’s money. Instead, whenever i could help him in my capacity i did. The Go Air commercial was done completely free of cost by me and the money that i earned on the Tv show Kaun Banega Crorepati was also donated by me for the Wadia Children hospital.

If money was my motive in life then why did I decline late Mr Shandaar Amrohi’s will (he treated me like his daughter ) which was worth hundreds of crores in court and in the media ?

Is this done for PUBLICITY ? No one wants to be involved in something like this this for cheap publicity as this is more humiliating then something to be proud of, specially if you are a very private and self respecting person. I have been in this film industry since 1998 and have been part of the biggest blockbusters in the past. From Best actress awards to a bravery award i have won them all so please give me a break ! I don’t need publicity, specially cheap publicity.

My disappearance to the US - I HAD to go to the Us as I had work there which i could not ignore due to a prior commitment. In the end of the day I am a professional and cannot let my work suffer. I came back to India as soon as the police department required me to do so to help with further investigations.

Fight for SEATS - Really ? 50 seats and a V.I.P air-conditioned box (35 seater) was there , yet me and my friends sitting on 6 seats becomes an issue ? All through the IPL I have given ALMOST ALL my seats to the players families so taking over seats at all games is a completely wrong accusation and disrespecting anyone’s mother is OUT OF THE QUESTION as i might forget my name but never my manners.

Why did I file a F.I.R with the police ? Because after several warnings over the years I WAS LEFT WITH NO OTHER OPTION….. The whole point of this is that violent physical or aggressive behaviour should not be tolerated by rich or poor, man or woman, celebrity or not !

JEALOUSY ? Life moves on, people move on and so have I, and Happily so. I firmly believe and live by the principle that The Windscreen is always larger than the rear view mirror.

Underworld Don - I am as clueless and surprised about this development as anyone else is and am only a spectator like every body else.

PRIDE - Its worth fighting for irrespective of size, class and gender. One of the few things money CANNOT buy and the only thing that keeps your head over the crowd.

WOMAN POWER - If only a mother had corrected her son, when she saw what he was becoming, and not ignore it ; If only the journalist had not said - ‘’ Why is she making a big deal of an incident that is not rape or murder; " If only the girlfriend had walked out when she saw the first sign of abuse ; If only the female voter, made a note of an insensitive politician’s attitude towards women and made sure he never got elected again ; If only other women didn’t dilute the seriousness of the offence by calling it Jealousy ; If only the reporter did not write an article to bring down any woman or her character only because she had the guts to report it and stand up for herself ………………………IF ONLY !!…………..

Police investigation is on so i would humbly request people to have a little patience and wait for all the facts to come out. This is not a frivolous or immature complaint to the police. I have never lied in the past and do not lie when it suits me or is convenient. I am a responsible citizen of this country and my only fault is that I am a woman, who reached a breaking point after constantly being abused, threatened & humiliated at work by someone who once was very dear to me.

Violence and aggression against women is wrong, yet people try to point fingers at the woman who comes out with it trying to make her sound frivolous and with ulterior motive. My only motive is to fight for my self and this fight is not against any family but an individual. If the media found out about my complaint, and it became a big deal what can i do about it ? Did I call for a press conference ? NO I did not. I actually asked people and the media to respect my privacy.

As i said earlier, My motive is not to harm anyone but only to protect my self !

I’m grateful to any man who has had the courage to stand up, for woman genuinely going through similar circumstances. You are and always will be OUR HERO !

I rest my case.