Oh made his dash over the border at Panmunjom on November 13. 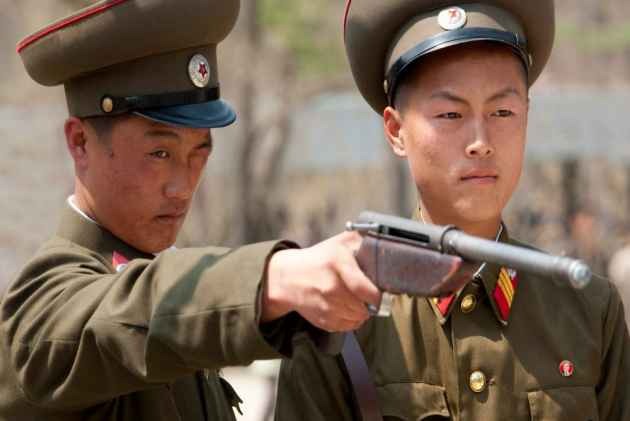 North Korea has replaced dozens of guards and fortified a section of its border with South Korea following the dramatic defection of one of its soldiers last week, a report said today.

The 24-year-old soldier, identified only by his surname, Oh, is recovering in a South Korean hospital after being shot at least four times by his comrades as he dashed across the border.

The report said around 35 to 40 North Koreans normally stand guard at the JSA, which is located at the Panmunjom truce village -- the only portion of the border where forces from the two sides stand face-to-face.

"They will likely be held accountable for not being able to prevent the defection," it added.

Oh made his dash over the border at Panmunjom on November 13.

Footage showed his former comrades opening fire on him as he raced on foot over the line that divides the two countries, after driving a military jeep to the JSA.

He was shot at least four times in his daring bid, and was found by South Korean troops slumped in a pile of leaves just south of the border.

In an apparent attempt to prevent further defections, the North Koreans have begun fortifying the border area where Oh crossed.

A picture posted on the Twitter account of acting US ambassador to South Korea, Marc Knapper, showed North Korean workers digging a deep trench on the North Korean side of the line as soldiers looked on.

"Was at JSA today, the North Koreans have planted two trees and are digging a trench at the spot where their soldier crossed the MDL (military demarcation line)," Knapper tweeted.

It was not clear if the spot photographed was exactly the same as the location of the defection, although it appeared to be similar.

The North Koreans have also reportedly closed down a bridge that leads into Panmunjom from the North after Oh drove across it without being stopped, a South Korean military source said, according to the Chosun Ilbo report.

Analysts said the closing down of the so-called 72-Hour Bridge is likely temporary, as it is the only bridge that connects the North to Panmunjom.