They also held banners and placards some of which read, “Nagas are not terrorists”, “Ban AFSPA, not our voice” and “Justice for Oting victims”. 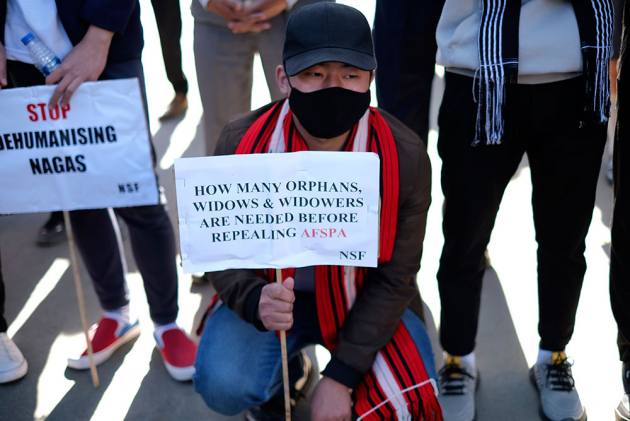 Thousands of people took part in the “Peoples’ Rally” held here on Friday, demanding justice for the 14 civilians killed by security forces in Nagaland recently and scrapping of the Armed Forces (Special Powers) Act (AFSPA) from the North-eastern region.

Participants of the rally walked from the Old MLA Hostel junction in the heart of state capital Kohima to the Raj Bhavan, a distance of around 2.5 kilometres, and submitted a memorandum on the demands to the governor's secretariat.

Besides members of the Naga Students’ Federation (NSF) which organised the rally, representatives of the North East Students’ Organisation (NESO), All Assam Students’ Union (AASU) and apex bodies of several tribal bodies took part in it. The protestors raised slogans denouncing the killing of 14 civilians by army para-commandos in the Oting area of Mon district in a botched up operation and its aftermath in the North-eastern state on December 4 and 5.

Remember His Face? Portrait Of A Bihari As A Father And Migrant Worker

They also held banners and placards some of which read, “Nagas are not terrorists”, “Ban AFSPA, not our voice” and “Justice for Oting victims”. NSF president Kegwayhun Tep, Peoples’ Rally organising committee convener Vipopal Kintso, NESO advisor Samujjal Bhattacharya and other leaders submitted a memorandum, addressed to Prime Minister Narendra Modi, to the governor's secretariat at Raj Bhavan. Governor Prof Jagdish Mukhi was not present at Raj Bhavan.

In the memorandum, the NSF - the apex students’ body of Naga students of Assam, Arunachal Pradesh, Manipur and Nagaland - demanded immediate justice for the slain youths of Oting and all Naga victims of alleged army excesses, repeal of the AFSPA, and expedition of finding out the solution to the Naga political problem. Alleging that people of the state were tortured by security forces as they get immunity under the AFSPA, the memorandum provided a list of alleged incidents of excesses by the armed forces in Nagaland since 1970.

In 1947, the Naga National Council (NNC) declared Nagaland as independent following which the central government sent forces to the state. The AFSPA was enacted in 1958. After decades of insurgency, the peace process started and a Framework Agreement with NSCN(IM) was signed in 2015 after over 80 rounds of negotiations spanning 18 years.

On the Naga issue, the memorandum said, “The envisaged solution must be mutually agreed upon on the negotiating table and not an imposed one. We appeal in the greater interest of the Nagas and other communities and the Indian Nation to impartially and honourably deliberate the issues emerging from the situation in order to usher in an era of peace through optimum utilisation of your political will,”

The memorandum would also be sent to President Ram Nath Kovind and Nagaland Chief Minister Neiphiu Rio. NSF president Kegwayhun Tep said the organisation would continue the fight till the demands are met. Speakers at the rally also demanded that Union Home Minister Amit Shah withdraw his statement that the army personnel had fired in self-defence.

Altogether 14 civilians in Nagaland’s Mon district were killed in three consecutive episodes of firing by security forces, the first of which has been claimed to be a case of mistaken identity. Shah had told the Lok Sabha that the army had received information on the movement of insurgents in Mon and ’21 Para Commando’ unit had laid an ambush. “A vehicle was signalled to stop but it tried to speed away.

Suspecting the presence of insurgents in the vehicle, the security personnel opened fire, leading to the death of six of its eight occupants,” Shah said. Regretting the death of the civilians, he had said security forces fired in self-defence. Eight others, including an army man, were killed in subsequent clashes between the force and villagers.