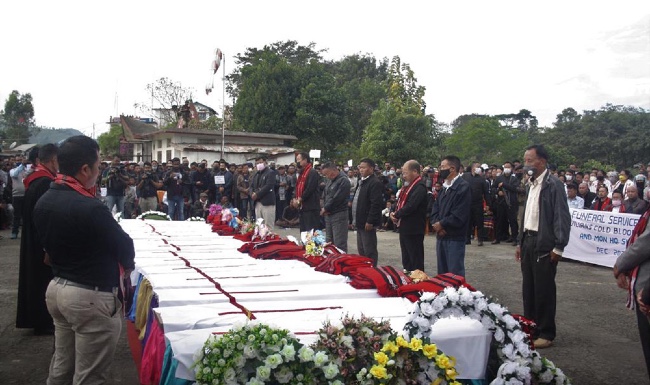 The Special Investigation Team (SIT) constituted by the Nagaland government to probe the killings of 14 civilians by security forces in Mon district on December 4 and 5 last year will submit the final report to the court after receiving the forensic results, a senior official has said.

Nagaland Additional Director General of Police (Law and Order) Sandeep Tamgadge, the overall supervisor of the SIT, told reporters here on Thursday that 85 civilians, and 37 security personnel, including 31 army jawans involved in the botched operation, have been examined and the team has visited the spot multiple times.

"The exhibits, soil and blood samples have been sent to Central Forensic Science Laboratories in Guwahati and Hyderabad and their reports are awaited. As soon as we receive those, we will start preparing the final report which will be submitted to the court," he said.

The official said that once the final report is submitted to the court, everyone can access the findings but not before that as it would not be "legally tenable". "We have worked against time to complete the probe, and we have reached this far. But it would be difficult to say how long the forensic laboratories take, but we have made a special request to them to expedite the scientific analysis considering the sensitivity of the case," he said.

He said that six coal miners and seven other villagers were gunned down by a team of 31 army personnel, led by a Major and also comprising two JCOs, in the Oting-Tiru area on December 4, and another civilian was killed in another incident in Mon town on December 5, following which suo motu cases were registered with Tizit police station.

More members were co-opted in the SIT, which is now made up of 21 officers, including four from the Konyak tribe to which the deceased belonged, and Inspector General of Police (Range) Limasunep Jamir is the Chief Investigating Officer (CIO).

The SIT was divided into eight teams, of which four teams were tasked with examining the witnesses and survivors in the three incidents, while one team each was tasked with studying the incident site and collecting evidence, cyber technical analysis, comparison of documents, and coordination with various forensics.

"During this period, the SIT has visited the site multiple times, and collected a lot of material evidence including empty cartridges, and an unmanipulated video. The SIT examined 85 civilians including two survivors undergoing treatment in Assam's Dibrugarh, and other injured people being treated in medical establishments at Dimapur and Mon, besides villagers from Oting and government officials," he said.

He said that the security forces were cooperative with the SIT. The officer asserted that the main motive of the SIT was to conduct the investigation in a professional manner so that the evidence stand all odds in the court.