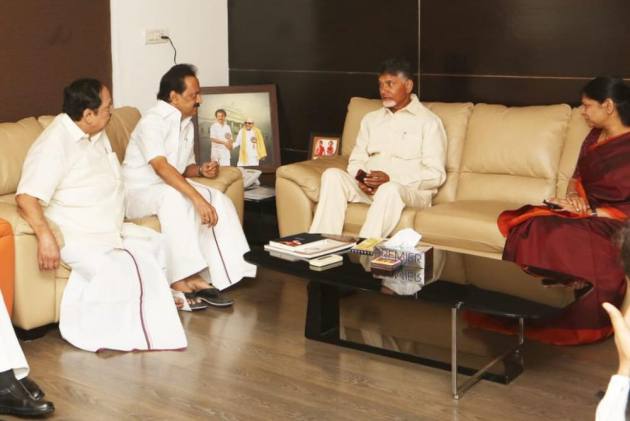 Andhra Pradesh Chief Minister N Chandrababu Nadu on Friday visited DMK president M K Stalin in Chennai as part of his efforts to cobble up a front against the BJP and lauded the Dravidian party leader as being better than Prime Minister Narendra Modi.

Asserting that he was not the face of the anti-BJP front which he is trying to forge, Naidu said the question of who would lead the alliance would be taken up later.

Asked by reporters if he was the face of the alliance,Naidu said "No, I am not the face of this alliance. You have to understand that.

I am very clear I am not an aspirant, I am only a facilitator... I will bring everybody together. we will decide and take things forward."

On who would lead the alliance,he said there were so many leaders. "Even Stalinji is better than Narendra Modiji...there are strong leaders...we will work that out and decide."

While Rahul Gandhi led Congress has a pan Indian presence, Naidu described regional leaders, including himself, West Bengal Chief Minister Mamata Banerjee, Stalin and Deve Gowda as strong leaders in their respective states, who are coming together against the BJP.

After a 50-minute meeting with the DMK chief, Naidu said he had come to request Stalin to join him to "save this nation since democracy and the nation are in danger and all of us have to work together against the BJP".

Stalin said he pledged DMK'S full support to Naidu's effort to rally all parties to dislodge the BJP government at the Centre, which has been "initimidating" even autonomous institutions like the RBI.

Stalin said he assured Naidu that he would participate in a proposed consultative meeting of leaders at Delhi or any other suitable place to take forward the initiative.

"Things like the Common Minimum Programme will be devised for sure," the DMK top leader said to a question.

Stalin said he has all along been batting for the unity of state leaders and Opposition parties to halt the 'snatching away' of the rights of states by the Centre.

Downplaying the possibility of differences among parties repeatedly, Naidu said "national interest is of utmost importance when compared to individual or political interest."

"We have to join together... I am in touch with Mamata Banjerjee. I am going to meet her again. We have to work together to save this nation."

Despite past differences with the Congress, he had joined forces with that party, considering the national interest, Naidu said.

Only if there is democracy could there be parties, he said, adding that was the situation today.

Asking journalists if people had got any benefit from the NDA government, the TDP top leader It was a pity that people were not even able to withdraw money from ATMs post demonetisation.

To a question on his view on the AIADMK government in Tamil Nadu, he shot back asking "where is the government?"

Recalling his association with DMK since the National Front government days of the late 1980s, he said his idea was to facilitate an anti BJP platform.

Naidu charged the centre with interefering in the affairs of a regulatory body like RBI, which was never done in the past.

He alleged that the economy was in the doldrums and pointed to aspects like Non- erforming assets and hit out at the government over demonetisation.

Levelling a slew of accusations against the BJP, he said there was intolerance, farmers distress and unemployment.

Naidu alleged that the Enforcement Directorate and Income Tax departments were being used only to malign and harass all opposition leaders.

Stalin lauded Naidu for his good effort to defeat the "anti-people," BJP at the hustings.

"Be it court, CBI or RBI, all autonomous institutions are being initimidated by the Centre... to stop it the BJP government should be dislodged," Stalin said.

Days ago, when Naidu visited Congress president Rahul Gandhi, Stalin had welcomed it saying it was the need of the hour for all non-BJP parties to come together on a common platform.

He also had pledged DMK's support to the initiative of Rahul Gandhi and Naidu to defeat the saffron party in the 2019 Lok Sabha polls.

The DMK chief also had months ago endorsed West Bengal Chief Minister Mamata Banerjee's efforts to bring various parties together to oppose and defeat the BJP.