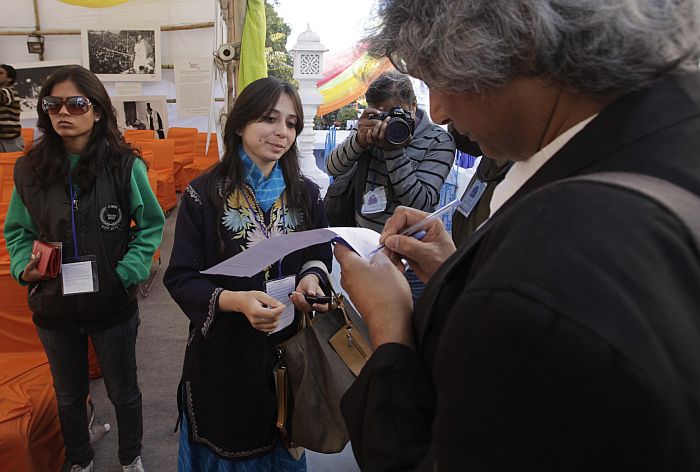 This article was first published in Index on Censorship

When the Rajasthan police apparently concocted a fictitious assassination plot leading Salman Rushdie to stay away from the Jaipur Literature Festival, the mood in Jaipur was glum. Everyone took the plot to be real, until The Hindu reported the convoluted manipulation by the police.

Many in India wanted to hear Rushdie, who avoided India during the fatwa years and has been able to make only a few visits since 2000. Festival goers were hoping to hear him speak about the filming of Midnight’s Children and his forthcoming memoir. But protests from Muslim groups and the plausible threat made him change his mind.

Which is where the Fab Four came in. On Friday, Poughkeepsie, NY-based Kumar, who teaches at Vassar and who has irritated Hindu nationalists in the past with his magnificent, in-your-face memoir, Husband of a Fanatic started reading passages from The Satanic Verses. Hari Kunzru, a British-Indian novelist based in New York also took a stand at the same panel discussion. Both novelists stopped reading after the alarmed festival organisers pleaded with them.

Kunzru, a former English PEN vice-president, takes freedom of expression seriously. When the European Writers’ Parliament met in Istanbul and Turkish authors protested against the presence of VS Naipaul, forcing Naipaul to cancel his appearance, Kunzru spoke out. Reading from Rushdie’s controversial novel was no different.

Soon thereafter, the police arrived, making inquiries about illegal conduct at the festival. Importing The Satanic Verses into India is prohibited but the law is unclear if possessing the novel is a crime, or reading aloud an extract from it is a crime. A lawyer or the People’s Union of Civil Liberties, the only local civil society group to support Rushdie last week, said that as the four authors read extracts from downloads, and not a book, it may not be a crime. Shashi Tharoor, novelist, diplomat, and parliamentarian pointed out he has routinely quoted and cited from The Satanic Verses and never been troubled.

In any case, the police should not throw around terms terms such as “guilt” and “crime”, as they have been doing, when they haven’t filed charges, nor proved their case before a judge.

The government could claim that by reading from the novel the authors incited the public. But incited to do what? Demand overturning the ban, nothing more. In fact, eyewitnesses say that the four authors were listened to in respectful silence, and warmly applauded. In any case, if the government wishes to proceed against the authors and is really mean-spirited, it could do so under S. 295A which gives the state the power to use criminal law against individuals who may have intended to cause trouble. But was there criminal intent, or mens rea? Sure, this is defiance, and it challenges a governmental act but it is Gandhian in its peaceful nature.

Police are seeking recordings of the reading, which, at the time of writing, the festival organisers are refusing to hand over. It is clear that the Rajasthan Police’s actions are meant to intimidate the authors and their supporters.

The role of the festival organisers — while their position is delicate — also requires scrutiny. If an author read from Ma Jian’s Beijing Coma, or Liu Xiaobo’s poems, or displayed Ai Wei Wei’s art at a public event in China, one would expect that the police would swoop down, and the organisers would very likely be forced to hand over the author to the Chinese security.

But this is India; a nation that holds elections, calls itself a democracy, and has a constitution that offers some protection for free speech. The actions of the Indian government in recent days, the intimidation of the five writers and its pusillanimity over Rushdie’s visit fall considerably short of India’s aspirations and claims.

While the organisers haven’t yet handed over the tapes, they told the authors to leave Jaipur immediately, lest they be arrested. It is not known if they offered them any protection. Worse, a lawyerly statement was issued, which in effect blamed the authors for “disturbing the peace”, because they acted outside the confines of the law. The organisers dissociated themselves from the action — which they can make a case for, but did not uphold the four’s right to speak freely, which is harder to justify. They should have said that even though they disagreed with the action, they’d defend the principle of free speech. But India isn’t there yet, it seems.

Future participants, apparently, will have to conform to rules not yet defined, so that they act within the confines of the law. Such rules defeat the rationale of a festival of literature, where ideas are expressed to be argued over and debated; such rules restrict fundamental freedoms.

On Sunday, the writer S. Anand. —who publishes dalit literature under the imprint Navayana — joined the protests, reading an eloquent passage from The Satanic Verses, which underscores the spirit of the protests:

What kind of idea are you? Are you the kind that compromises, does deals, accommodates itself to society, aims to find a niche, to survive: or are you the cussed, bloody-minded, ramrod-backed type of damnfool notion that would rather break than sway with the breeze? The kind that will almost certainly, ninety-nine times out of hundred, be smashed to bits: but, the hundredth time, will change the world.

On Monday, leading Indian writers began to circulate a petition to the Indian Prime Minister, Manmohan Singh, calling for the ban on The Satanic Verses to be lifted. The battle to undo the damage of the past quarter century has begun.

There are no ifs and buts. As Rushdie wrote in The Satanic Verses:

A Poet's work (is) to name the unnameable, to point at frauds, to take sides, start arguments, shape the world and stop it from going to sleep.

It is time for India to wake up.

Salil Tripathi is a journalist and author and the chair of English PEN’s Writers in Prison Committee.

Why I Read From The Satanic Verses