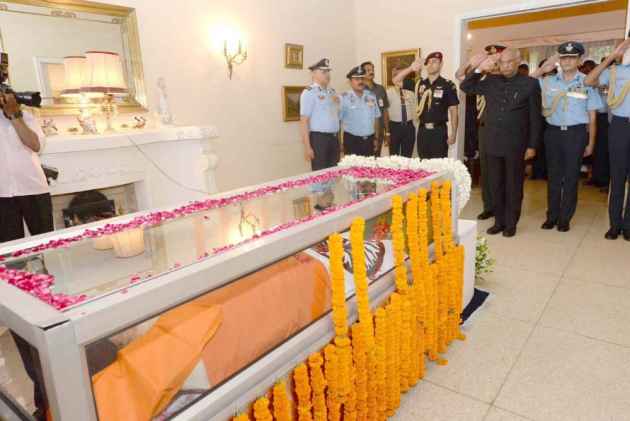 The last rites ceremony of Marshal of Air Force ArjanSingh, hero of 1965 India-Pakistan war and the only Air Force officer to be promoted to five-star rank, is underway at Delhi's Brar Square.

Army Chief General Bipin Rawat described the five-star ranking officer as "a legend, an icon, a pilot-chief who led from the front and a philanthropist to the core".

He recalled Singh's immense contribution as the Air Chief during the 1965 India-Pakistan war, the first major air battle of the IAF after independence.

"It was to his credit that despite initial setbacks, we were able to 'overcome and overwhelm' the enemy and spoil their design to annex Jammu and Kashmir," Air Chief Marshal B S Dhanoa told reporters.

Arjan Singh's daughter, Asha Singh, and other members of the family, including his niece and actor Mandira Bedi, were present at the officer's residence, where his mortal remains lie in state. His son Arvind Singh is expected to arrive later this evening from Arizona, US.

The tricolour will fly at half mast at all government buildings in the national capital tomorrow in the honour of the military legend.

The IAF patriarch will be given a state funeral at 9.30 am tomorrow at Brar Square, Sitharamnan told reporters.

The cortege will leave on a gun carriage from Arjan Singh's 7-A Kautilya Marg residence at 8.30 am. A gun salute will be given, and if weather permits, a fly past will also take place, the defence minister said.

Arjan Singh's family has also planned a ritual for the funeral.