Ever tried looking for books in Indian languages other than English in Delhi? Well, your search ends here - but don't be surprised if you find more regular foreign tourists here... Among the first thing I notice after descending the steps that lead to the Indian Book Shelf are the two sofas right in the centre of the shop, and the colourful little box seats strewn all over. The mood is that of a friendly reading room and I’m momentarily confused.

"Do you have a library facility as well?" I ask Anil Varma, one of the company directors. He smiles, he’s been asked this before. "No, we only sell—but unlike some other shops we also encourage people to come in, look around, read on the premises if they want to. It doesn’t matter if they don’t end up buying anything." Varma’s point is that with reading already being such a niche activity, book stores must do what they can to make potential customers feel welcome—not scare them away by having shop attendants scrutinising their every move. But then, it’s easy to see why the owners of this particular shop are so keen to nurture and encourage book-lovers: the Indian Book Shelf is almost certainly the only shop of its size in Delhi that is dedicated to the sale of books in Indian languages. 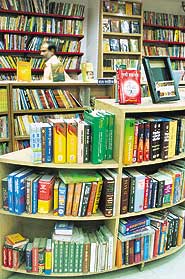 The shop began life as the Hindi Book Centre (a name it is still widely known by) around 40 years ago; it was opened by Star Publications mainly as a sales outlet for its Hindi pocket books. "But soon after, we started stocking and selling Hindi books by other publishers too," says Varma, "and last year we turned multi-lingual and changed the name." Hindi is still, of course, the predominant language—they have over 1,50,000 Hindi titles—but Indian Book Shelf now also stocks books in Bengali, Urdu, Punjabi, Marathi, Telugu, Tamil and Malayalam.

Walking around the store, it’s easy to see that the arrangement of titles is a lot more systematic than it is in the token Hindi sections one finds in some English book shops. Here, the books are classified by language and genre (poems, fiction, biographies, plays, humour, even "Dalit Sahitya"), arranged alphabetically and computer-catalogued as well for easy reference, in both the Devnagari and the Roman scripts. What isn’t immediately available on the premises can be sourced. "We are in touch with over 500 vernacular-language publishers all over India," Varma says, "and we make sure to get copies of every new title they publish, or at least to stay abreast of their catalogues."

A separate room within the shop is dedicated to titles that were published before 1985. "Many of these books are out of print," says Varma, "and we offer a 50 per cent discount on them." This section is a little less organised than the rest of the shop, the books a little worse for wear, but this doesn’t seem to matter to customers who spend hours wading through the piles in search for that one little treasure.

Daryaganj, where the shop is located, has traditionally been a bastion of publishing activity in Indian languages. But it’s a surprise to learn that Indian Book Shelf now also has an outlet in—of all places—a Gurgaon mall (the Mega Mall, DLF City Phase IV), where Bengali and Hindi books are doing very well.

The shop has a London branch too, which Varma claims is "the only bookshop in the UK that is completely dedicated to Indian-language publications". Incidentally, foreign tourists trying to learn Indian languages are among the most regular visitors to the Delhi branch. "They often place orders with us, since we have a facility for shipping books to other countries," says Varma.

The Sahitya Akademi also retails its own publications at its Mandir Marg office. The Akademi stocks over 5,000 books in most of the Indian languages, though Hindi and English titles jointly account for 66 per cent of its sales. According to Rakesh Sharma, deputy secretary (sales), Bengali, Malayalam and Tamil are the next most popular languages with 5 per cent each, followed by Marathi, Urdu and Punjabi with 3 per cent each. The Akademi also arranges around 70-80 exhibitions of vernacular literature yearly, in various parts of the country.

Beyond the Language Barriers

Though there are a few other shops in town that stock books in regional Indian languages, their collections are not very impressive or exhaustive.

In fact, the Indian Book Shelf is the principal source for most of the city’s other book stores that stock a few Indian-language titles.

You can visit the Asian Book Centre (Call 26518359) located in the Ber Sarai Shopping Complex. The Sree Rama Electronics Shop in Munirka (4-5, Nathu Singh Market) is another store where Tamil titles are available.

However, unfortunately for the lovers of vernacular literature in the Capital, these book shops are few and far between, and usually relegate non-English books to a small space in some corner of the store.