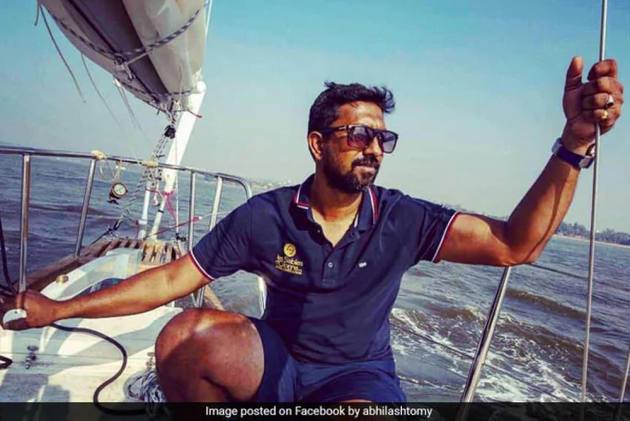 An Indian Navy aircraft has located the vessel of Indian Naval officer Abhilash Tomy, who was badly injured while participating in the Golden Globe Race, "rolling excessively" in the South Indian Ocean, a Defence spokesman said Sunday.

He said all efforts are being made to rescue Commander Tomy who had suffered a back injury Friday after his yacht was hit by a vicious storm with 14-metre-high waves mid-way across south Indian Ocean.

"INS Satpura and INS Jyoti are heading at top speed to reach Tomy", the spokesman said.

He said the situation was being monitored at Naval Headquarters in New Delhi, as well as by the Joint Rescue Coordination Centre at Melbourne, Australia.

Australian Navy frigate HMAS Ballarat is on the way to reach Tomy, he said.

The Indian Navy's P8I aircraft, which flew from Mauritius in the early hours Sunday, has located the "mast broken boat rolling excessively", he said.

"Commander Tomy responded by ping on EPIRB as the aircraft was flying over him," the spokesman said here.

Quoting Captain Chandrahas Vivek, pilot of the aircraft which flew from Mauritius this morning, the spokesman said the aircraft established visual contact with the yacht and has landed back at Port Louis Mauritius.

The position was relayed to JRCC Australia and the War room in New Delhi through INMARSAT, he said.

The aircraft remained for two hours on the task in the area and landed at Mauritius.

He said heavy rains have been reported from the area.

Tomy can only be rescued by naval ships, he said.

He had Sunday managed to get in touch with race organisers in France through messages and had requested for a stretcher as he could not move on his own. He was representing India in the Golden Globe Race 2018 (GGR) on an indigenously-built sailing vessel 'S V Thuraya'.

Tomy, who became the first Indian to circumnavigate the globe in 2013, is the only Indian participating in the race that involves a gruelling 30,000-mile solo circumnavigation of the globe.

His vessel is in the south Indian Ocean, about 1,900 nautical miles from Perth in Australia.

Tomy's vessel was dismasted in extremely rough weather and sea conditions, with wind speeds of 130 kmph. He was in third position in the race and has sailed over 10,500 nautical miles in the last 84 days, since the race started on July 1.

A report from France on Friday night had said 70 knot winds and 14-metre-high waves have left the yachts of Tomy and Ireland's Gregor McGuckin dismasted, and twice knocked down the yacht of second-placed Dutchman Mark Slats.

Both McGuckin and Slats had reported that they are okay, but 39-year-old Tomy, making his second solo circumnavigation, has been injured, it had said.

It had also said other entrants were asked to make towards Tomy's position if possible, and added that the weather was extreme.

The nearest yacht was McGuckin's 'Biscay 36 Hanley Energy Endurance', some 90 miles to the southwest of Tomy's 'Thuriya', but she too was dismasted in the same storm.