The federation submitted that as no junior doctors have been inducted this year, the second- and third-year PG doctors are handling the patients. The plea contended that this has led to a situation where the doctors are working for more than 80 hours per week and several of them have now tested positive for COVID-19. 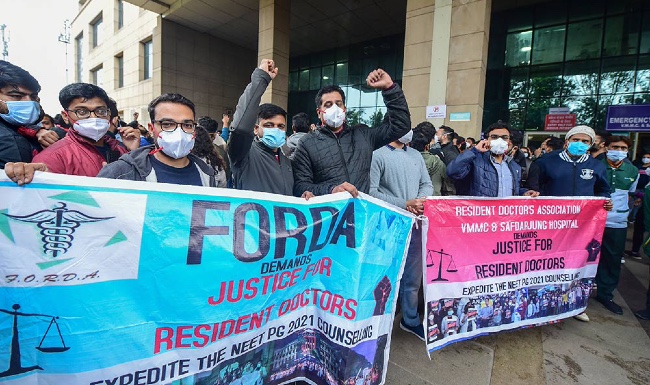 A doctors' federation has moved the Supreme Court saying there is an urgent need to commence the NEET-PG counselling and that the revision of the OBC and EWS reservation criteria at the fag end of the process will lead to further delay in the final selection.

The doctors overburdened with work which has a direct affect on healthcare at large, the plea said. "It is pertinent to note that, keeping in mind that the postgraduate course spans over three years, the hindrance in the induction of first-year postgraduate doctors, in effect, results in a deficiency of around 33 per cent of the medical workforce constituted by the postgraduate doctors." "Moreover, it is the first time in the history of the independent India, that the nation has had a Zero Session qua the Post Graduate Courses (MD/MS)," the plea said.

On the issue of OBC and EWS quota, FORDA submitted that the view of a three-member committee formed by the Centre that the revision in the present scheme of reservation should be implemented from the next academic year is appropriate.

"That report of the said three-member committee further stands fortified by the fact that the healthcare infrastructure is already understaffed and hence cannot be put to further disadvantageous position in such testing times. The revision of the OBC and EWS reservation criteria at such fag end of the process shall certainly lead to furthermore delay in the commencement of the NEET PG counselling and the final selection thereafter," the plea said.

The Centre had told the apex court on Wednesday that it would not accept a position whereby those falling in the OBC or the EWS category, whether before or after the exercise of revisiting the criterion of Rs 8 lakh annual income, are deprived of something that is legitimately due to them. It had urged the court to let the stalled NEET-PG counselling be allowed to go on as the demand of resident doctors is genuine and the country needs new doctors, even when the matter of the validity of the Economically Weaker Section (EWS) quota is under adjudication.

The NEET-PG candidates, who had challenged a July 29, 2021 notification for the implementation of the OBC and the EWS quotas from the 2021-22 academic year, opposed the government's justification of applying the Rs 8 lakh income criteria, saying no study has been conducted on it.

Large-scale protests were held by resident doctors of various hospitals under the banner of the Federation of Resident Doctors' Association (FORDA) in Delhi and other parts of the country over the delay in the NEET-PG counselling, which has been postponed due to the pendency of the case and the Centre deciding to revisit the criterion for the determination of the EWS quota.

In its affidavit, the Centre has said it has decided to accept the recommendations of the three-member panel to retain the current gross annual family income limit for defining EWS at Rs 8 lakh or less. It has also told the court that according to the panel, family income is a "feasible criterion" for defining EWS and in the current situation, a threshold of Rs 8 lakh seems reasonable for the purpose.