The Twitter handle of FORDA shared a video clip in which a large number of doctors are seen protesting outside the premises of Nirman Bhawan, which also houses the office of Union Health Minister Mansukh Mandaviya. 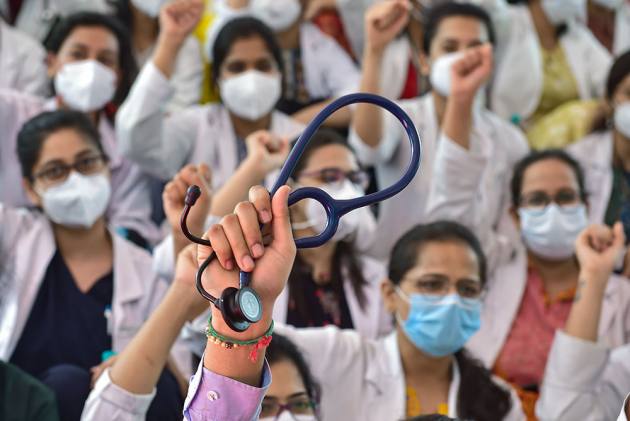 Resident doctors of various hospitals in Delhi on Monday protested in front of the Nirman Bhawan here over the delay in NEET-PG 2021 counselling, as they intensified the ongoing stir to push forth their demands.

Patient care was affected for the fourth consecutive day on Monday as resident doctors of the three Centre-run and some of the Delhi government-run hospitals here boycotted all services, including emergency, as part of the nationwide agitation called by the Federation of Resident Doctors' Association (FORDA). FORDA president Dr Manish said, "We are going to intensify and escalate our protest today".

The Twitter handle of FORDA shared a video clip in which a large number of doctors are seen protesting outside the premises of Nirman Bhawan, which also houses the office of Union Health Minister Mansukh Mandaviya. The protesting doctors, carrying banners and posters, held a demonstration and raised slogans, seeking redressal of the issue.

Dr Anuj Aggarwal, General Secretary of Safdarjung RDA said, "The minister along with some officials verbally assured us that within one week the EWS report will be submitted in Court and the matter will be taken up on an urgent basis. However, they have not got the case mentioned.

Dr Sunil Duchania, the president of RDA at Lady Hardinge Medical College said, "A group of four doctors met the Health Minister who asked us to withdraw the strike saying all efforts are being made to expedite the matter. However, such verbal assurances have been made before and we will continue our protest outside Nirman Bhawan."

Resident doctors at Ram Manohar Lohia, Safdarjung and Lady Hardinge hospitals, and three hospitals under the Maulana Azad Medical College (MAMC), including LNJP Hospital, had resumed the stir on Friday, accusing the government of making a false promise. They also pointed out to the "acute shortage" of resident doctors across the country as the counselling of the NEET-PG 2021 batch has already been delayed by eight months.

On December 9, the resident doctors had said they were suspending the agitation, called by the FORDA for a week following the Health Ministry's assurance to expedite court hearing and subsequently fast-tracking of the counselling process. However, on Wednesday, FORDA had written to the Union Health Minister informing him that it was resuming the stir from December 17.