The resident doctors at Ram Manohar Lohia, Safdarjung and Lady Hardinge hospitals said they resumed the strike as the government had made a "fake promise". 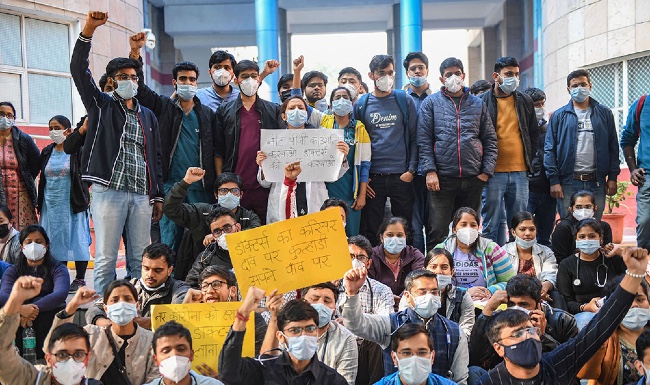 After a brief lull, resident doctors of the three Centre-run hospitals in Delhi resumed their strike on Friday and boycotted all services, including emergency, over the delay in NEET-PG 2021 counselling.

They pointed out the "acute shortage" of resident doctors across the country as the counselling of NEET PG 2021 batch has already been delayed by eight months.

On December 9, the resident doctors had said they were suspending the agitation, called by the Federation of Resident Doctors' Association (FORDA), for a week following the health ministry's assurance to expedite court hearing and subsequently fast-track the counselling process. However, on Wednesday, FORDA wrote to Union Health Minister Mansukh Mandaviya informing him that it was resuming the strike.

"The plight of overburdened and exhausted resident doctors seems to have fallen on deaf ears of the authorities who do not seem to be concerned about the shortage of healthcare workforce due to non-admission of fresh batch of resident doctors.

"With the threat of third wave of COVID-19 looming large, the best the authorities could have done was to expedite the counselling and subsequent admission process - instead, there is inaction and lack of urgency in the matter. Hence, as informed earlier, resident doctors are left with no choice but to go for withdrawal from all services (routine  as well as emergency) in healthcare institutions, 17th December, 2021 onwards. The onus of this unfortunate situation affecting healthcare services is on the authorities," FORDA's letter read.

Functionaries of Safdarjung Hospital's Resident Doctors' Association had in a letter on Wednesday said they had been waiting patiently since the agitation was put on hold. "However, once again, no action was taken by the ministry since one week, which is in stark contrast to its fake promises and false assurances," the letter read.

"With the imminent threat of third wave of COVID 19, it is evident from the lackadaisical and ignorant attitude of the authorities that the healthcare, plight of overburdened doctors and suffering of poor patients is not of any importance to them at all," the letter stated.

Dr Sunil Duchania, RDA president at Lady Hardinge Medical College, said the authorities concerned do not seem to be concerned about the shortage of force in heathcare.

"Due to the irresponsible behaviour, the academic year of 45,000 NEET PG aspirants is almost wasted with the super-added ripple effect of shortage of resident doctors to combat the impending third wave of COVID-19 in all hospitals across the nation," Dr Anuj Aggarwal, general secretary of Safdarjung RDA, said.