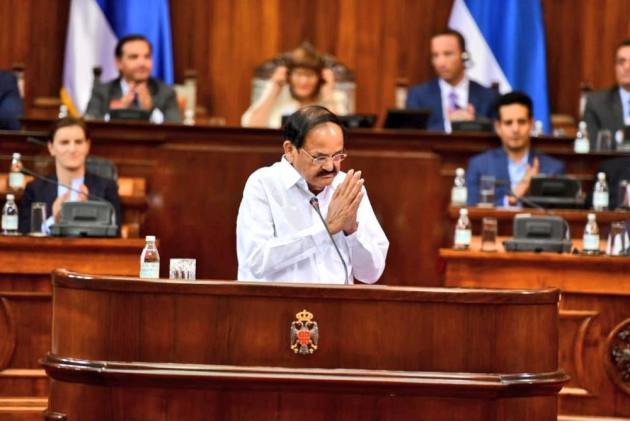 Naidu, who arrived here on Friday, said that relations between India and Serbia are deeply rooted in history.

Addressing the special session of the National Assembly of Serbia, where the first Non-Aligned Movement (NAM) summit took place in 1961, the vice president said that India and Serbia share a common perspective on many issues and have a deeper affinity that brings the two countries closer.

"It was here that the first NAM Summit took place in 1961. Prime Minister of India Pandit Nehru and other world leaders of Non-Aligned Movement addressed the NAM Summit in this hallowed hall," Naidu said.

He said it would be good to recall Nehru's words at the conference of NAM nations in Belgrade on September 2, 1961.

"His call which rings so true and relevant even today was to build in our own countries societies where freedom is real. Freedom is essential, because freedom will give us strength and enable us to build prosperous societies.

"We must strive to strengthen our democratic polities and internalise the concepts of freedom, dialogue, inclusion and rule of law in our governance structures," Naidu said.

From the early days of Independent India, both countries laid great emphasis on the NAM and contributed much to creation of a new and democratic world order, particularly for the post-colonial third world that challenged the concept of bipolar world, the vice president said.

"Marshal Tito was a familiar name in many Indian households. I understand that he addressed Indian Parliament during his visit to India in 1954. Thus, the Parliaments of our two countries had the privilege of and benefit of learning from each other," Naidu said.

Today is the International Day of Democracy. This year marks the 70th anniversary of establishment of diplomatic relations between our two countries, he said.

This place is the historic meeting ground of nations that decided to launch the Non-Aligned Movement (NAM) in 1961. It is good to recall that India and the then Yugoslavia were the pioneers of that movement, Naidu said.

"Serbia and India share a common commitment to democratic values and the need to continuously nurture the democratic spirit for improving the quality of the lives of our people," he added.