Boris Johnson, seated beside Prince Charles and a row ahead of interior minister Priti Patel, struggled to fix his umbrella which, due to blustery conditions, had turned inside-out. 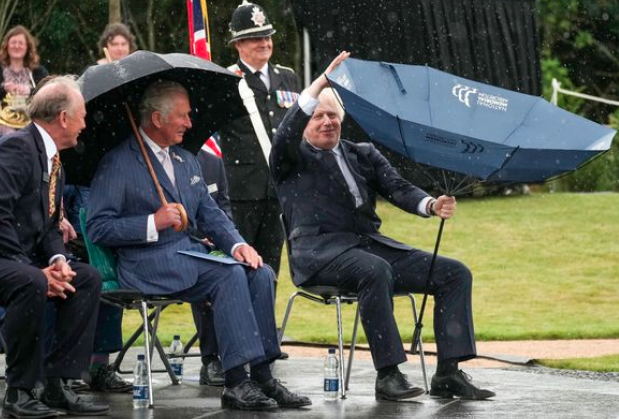 British Prime Minister Boris Johnson offered a few laughs at an official event attended by Prince Charles and Priti Patel, when he was seen struggling with an umbrella.

His umbrella, too reluctant to co-operate, put him in a tricky situation. You read that right!

The video clip shows Johhnson in trouble and struggling to fix his umbrella due to strong winds as it turned inside-out. The whole incident amused everyone present at the memorial. Even the Prime Minister himself was seen laughing at his own misery. The incident left everyone around him chuckling. Johnson, himself, was seen laughing at his own plight after he finally managed to fixed it.

....up, up and nearly away âÂÂÂÂÂÂÂÂÂÂï¸ÂÂÂÂÂ

PM Boris Johnson struggles with his umbrella whilst seated next to Prince Charles at a memorial recognising the sacrifice of police officers who have died on duty.

The video was initially shared by SkyNews which later went viral on twitter. Netizens got a fresh witty content to create memes and jokes on and the social media users can't stop talking about it.

The biggest task Boris Johnson faces today: learning how to effectively use an umbrella. pic.twitter.com/3d6KYsKtrh

On the left is how to hold your umbrella in strong winds. On the right is our Prime Minister who has kindly offered to show you how not to hold it when a breeze picks up ðÂÂÂðÂÂÂðÂÂÂðÂÂÂ https://t.co/xV44gzjejG

But, despite having an element of entertainment in it, the incident also  garnered criticism as some found this to be  'disgraceful' given it was a memorial service.