Many prominent faces in the media attended the protest meet and gave statements supporting NDTV and condemning the central government. 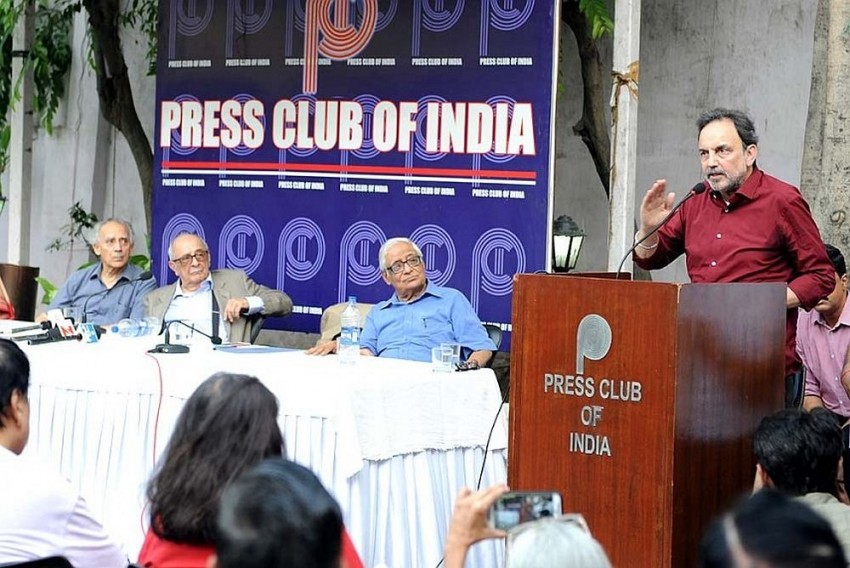 Journalists and intellectuals showed up in significant numbers at a protest meeting organized by the Press Club India against the CBI raids on NDTV proprietors.

On Monday, the CBI raided offices and homes of NDTV co-founders Prannoy and Radhika Roy on charges of causing losses of 48 crore to ICICI bank. NDTV has called the raids a ‘witch hunt’ and a blatant attempt to ‘undermine democracy and free speech in India.’

Showing solidarity with the cause, many prominent faces in the media attended the protest meet and gave statements supporting NDTV and condemning the central government.

The stifling heat was punctuated by laughter and applause as the press community stood united against the CBI’s actions. Former Rajya Sabha member HK Dua compared the raids to emergency era tactics.

He said, “This is a warning to all others that if you don’t fall in line you’ll meet a similar fate.” He urged the media to be cautious and vigilant.

Fali Nariman, senior Supreme court advocate, touched on the details of the raid, saying the case was lodged by the CBI “only and solely” on the basis of information provided by one man.

He said he did not know of any other occasion where the CBI started a criminal enquiry based on the complaints of one man.

Nariman quoted the German pastor Martin Niemoller’s famous poem “first they came for the Communists”, encouraging the media to stand up for press freedom.

Aroon Puri, the editor in Chief of the India Today Group, was scheduled to speak  at the meet, but could not attend as he was out of town. A statement was read out on his behalf where he reaffirmed his support for freedom of the media.

Senior Journalist Kuldeep Nayar expressed his happiness that the media had been ‘awakened’, he urged everyone to commit to the idea of a democratic and secular India.

Former Minister Arun Shouri lightened the evening with his opening remarks thanking Narendra Modi for “bringing so many friends together”, the audience responded with laughter and hearty applause.

The last speaker of the evening was Dr. Pranoy Roy who warned that this was not just a ‘flimsy case’ against NDTV but ‘a signal to all of us… we will fix you even if you are innocent.’

He pledged that he would answer every one of the charges ‘openly and honestly’, ending with a statement reiterating his honesty-- ‘Radhika and I and NDTV have never touched one rupee of black money or bribed one person in our life.’