India-Japan ties are expected to get a boost from the personal camaraderie of Japan’s Prime Minister Shinzo Abe and newly elected Prime Minister Narendra Modi. 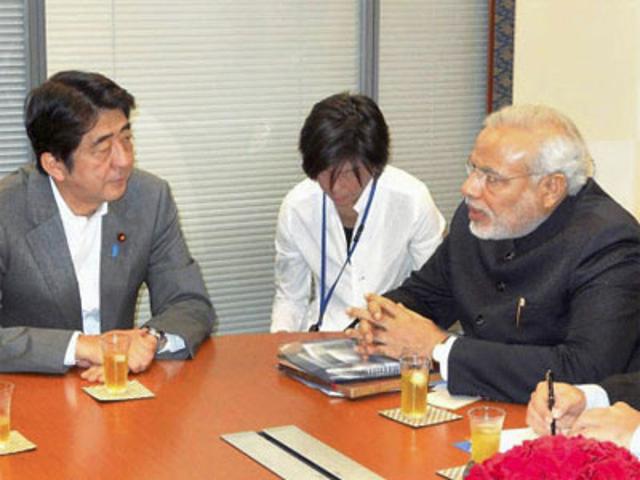 Asia’s leading nations have been slowly coming together to face the challenge of an assertive China. To the chagrin of Beijing, US, Indian and Japanese naval vessels gathered for a joint exercise in the Pacific ostensibly against piracy and terrorism. The rise of nationalist leaders in Japan and India, combined with growing US concern about aggressive Chinese policy, have created new dynamics in the region.

The Malabar exercise, an annual affair between the United States and India, commenced on 24 July at Sasebo Naval Base, Japan. China had reacted angrily in 2007 when the United States and India invited Japan, Australia and Singapore for the Malabar exercises. Under pressure from Beijing, New Delhi backed off and since then had refrained from making these exercises multilateral. But China’s growing maritime ambitions in the Indian Ocean region and greater assertion on territorial issues have led India to a more forceful posture, resulting in joint India-Japan naval exercises since 2012 and the invite to Japan this year for the Malabar series.

India-Japan ties are expected to get a boost from the personal camaraderie of Japan’s Prime Minister Shinzo Abe and newly elected Prime Minister Narendra Modi. Both leaders are emblematic of a new, ambitious and nationalistic Asian landscape. They have decisive mandates to reshape the economic and strategic future of their respective nations.

Modi has already underlined that India and Japan share a “fundamental identity of values, interests and priorities.” Japan’s economic and technological development has inspired Modi to emulate the Japan model, with flexible and bold fiscal policy that encourages private investment in infrastructure and technology. Modi’s first bilateral visit outside South Asia was supposed to be Japan, but the Indian Parliament’s budget session precluded this from happening. Moreover, Modi wanted that visit to showcase sconcrete deliverables. He wrote personally to the Japanese prime minister to express his regret, and speculation is underway that his trip to Japan, set for August, will result in big-ticket announcements.

Since serving as chief minister of Gujarat, Modi has enjoyed a close relationship with Abe. Modi is just one of three people followed by the Japanese prime minister on Twitter, along with a journalist and Abe’s wife. Abe, a longstanding admirer of India, has been a strong votary of strategic ties between New Delhi and Tokyo. For Abe, “a strong India is in the best interest of Japan, and a strong Japan is in the best interest of India.” He was one of the first Asian leaders to envision a “broader Asia,” linking the Pacific and Indian oceans to form the Indo-Pacific. And as he has gone about reconstituting Japan’s role as a security provider in the region and beyond, India, of all Japan’s neighbors, seems most willing to acknowledge Tokyo’s centrality in shaping the evolving security architecture in the Indo-Pacific. At the annual Shangri-La Dialogue in Singapore in May, Abe claimed a larger security role of Japan in Asia by assisting countries like the Philippines which have territorial disputes with China, suggesting that “Japan will offer its utmost support for the efforts of the countries of ASEAN as they work to ensure the security of the seas and the skies.” He went on to underscore US-Japan-India cooperation as a driving force for regional security and prosperity of the Indo-Pacific region.

Modi would like to use his personal connection with Abe to consolidate national ties. The Japanese corporate sector is enthused by Modi’s victory, looking to boost its presence in India, and Modi will be building on his personal ties with the Japanese businesses cemented during his tenure in Gujarat, to give a fillip to Japanese investment in India. India is the largest recipient of Japanese foreign aid. The Japan International Cooperation Agency has been involved in the funding of Delhi Metro, India’s biggest subway system, and has agreed to fund the next phase of the Mumbai subway. Japan is expected to play a major role in a number of high profile infrastructure projects, including completion of the ambitious Delhi Mumbai industrial corridor, a Chennai-Bangalore industrial corridor and a dedicated freight project in southern India. India has also invited Japan to invest in infrastructure projects in India’s northeastern region, where tensions with China loom large. India has expressed keen interest in buying Japanese ShinMaywa amphibious aircraft, the US-2i, a deal of around 15 planes worth more than $1.5 billion.

China, observing these trends, has been reaching out to the Modi government, both via bilateral and multilateral means. China and India, as part of the larger BRICS grouping, took one step towards challenging the western dominance of the global economic and financial order in July when they decided to set up the New Development Bank, headquartered in Shanghai, to finance infrastructure and development projects. At the bilateral level, Chinese Foreign Minister Wang Yi who visited Delhi in June as special envoy of the Chinese president to meet the new Indian leadership and boost bilateral ties saluted the new Modi government for injecting “new vitality into an ancient civilisation.” In an attempt to woo New Delhi at time when Chinese relations with Japan and Southeast Asian nations including Vietnam and Philippines have been deteriorating, Wang underlined that China was ready for a final settlement of its border disputes with India and prepared to invest more in India.

But the tensions show no sign of abating and Modi remains a nationalist looking to raising India’s profile on the global stage. He invited the political head of the Tibetan government in exile, Lobsang Sangay, for his swearing-in ceremony to which China reacted with a démarche. In a highly symbolic move, former Indian army chief General V.K. Singh was named a minister in Modi’s cabinet, holding the dual charge of the affairs of India’s northeastern states bordering China as well as being the junior minister in the ministry of external affairs. Though India has been trying to beef up border defences vis-à-vis China that process suffered from lack of direction. Singh, who served in the area in his military capacity, wants to prioritize development in the northeastern region so as to narrow the gap with the Chinese infrastructure development on the other side of the border. For the first time, a young member of parliament from Arunachal Pradesh, Kiren Rijiju, has been given a key ministerial position in the cabinet – minister of state for home – to underscore the administration’s intention of making the troubled northeastern region a priority. Lamenting the fact that India has, even after 68 years of independence, failed to ensure connectivity in its border areas, giving China a strategic advantage, Rijiju has been vocal about the need to strengthen the forces guarding the border where China claims more than 90,000 square kilometres of land disputed by New Delhi in the eastern sector of the Himalayas, including most of Arunachal Pradesh, called South Tibet by China.

At a time when China has alienated most of its neighbours with aggressive rhetoric and actions, India has an opportunity to expand its profile and work proactively with other likeminded states to ensure a stable regional order. Given the Modi-Abe connection, many expect a paradigm shift in Indian-Japanese relations. Whether or not that happens, Japan will remain a priority for India in the coming years.