The broad daylight terror attack on an Israeli official's car in Delhi's high security area, not far away from Embassy of Israel and the Prime Minister's Race Course residence, puts the spotlight back on our internal security 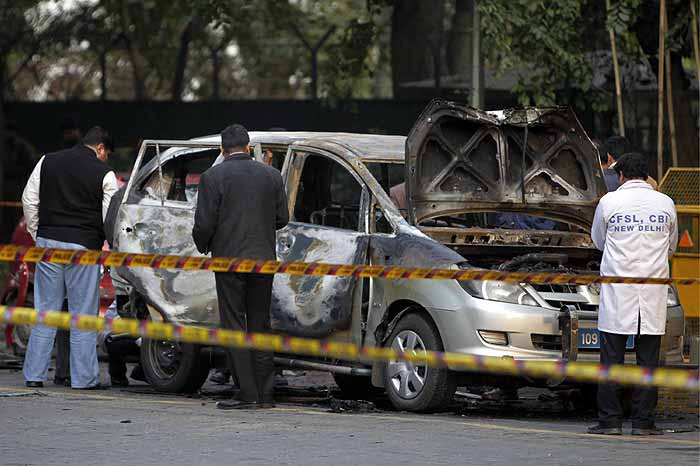 The broad daylight terror attack on an Israeli official's car not far away from Embassy of Israel and the Prime Minister's Race Course residence on 13 February has put the establishment in a tizzy. Official reactions were quick in coming for a change, egged on in the backdrop of immediate Israeli reaction. TV channels went in for full- sized live reporting, interviews and panel discussions with talk about ‘new technology’, ‘international terror having come to India’, speculating who could be behind the act, with a prominent panellist even stating that LeT could not be behind an act of targeting Jews in India. Israelis killed in 26/11 terrorist attack forgotten so soon?

Notwithstanding this, there is a need to undertake a dispassionate analysis of this terrorist act aside from investigating who is behind it. There is nothing new about motorcycle- borne terrorists undertaking terror missions. In fact, it is routine. There is nothing new either about areas outside foreign missions being very prone to terror threat. India should have known better with our mission in Kabul subjected to terror attack twice already. The requirement of 24x7 continued surveillance (both manual and electronic) outside foreign missions in India, particularly of a country like Israel, needed no emphasis.

Then there is talk of this ‘stick like device that was attached to the rear of the car’ being labelled ‘new technology’. Well, limpet mines with clockwork mechanism that could be attached to any metallic object have been available for the past decades (not years). Their miniaturization should not surprise us. On the contrary, we should have expected it long time back. There was obviously a timing device / clockwork mechanism that permitted the motorcycle- borne terrorists to get away and gave time for defusing a similar device in Georgia.

However, identifying as to who is behind these terror attacks is a different ball game and a complex one at that. While you cannot jump to Hezbollah, you cannot rule them out either. International terrorist organizations (like Al Qaeda and LeT) have linkages with other terrorist organizations and would hardly hesitate to be a front for Hezbollah or any other organization particularly in the name of global jihad and for targeting nationals of countries like the US, Israel and India. Is that not what the rabid mullah Hafiz Saeed was advocating in Multan to a 50,000 strong radical congregation recently? Did the Pakistani terrorists not unleash a vicious killing spree against Israeli nationals during the 26/11 Mumbai terror attacks?

Very unfortunately, India has also permitted the establishment of an intricate international terror network on its own soil that can now easily be operated through remote and which now is exceedingly difficult to identify. Mr M.K. Dhar, former Joint Director Intelligence Bureau wrote in his book Top Secret – India’s Intelligence Unveiled’:

“Way back in 1992-93... the process of ‘transplanting armed modules’ in the heartland of India had started taking cognizable shape. Some of these cells were identified in Assam, West Bengal, Bihar, Uttar Pradesh, Delhi, Kota / Ajmer region of Rajasthan, Gujarat, Maharashtra, Andhra Pradesh, and Kerala. SIMI had already started deputing ‘volunteers’ to Pakistan for training along with the mujahideen, Taliban and Al Qaeda cadres. They established firm linkages with Islamic Chhatra Shibir, Al Qaeda affiliated HUJI, Al Badr, Al Jihad and other organisations in Bangladesh... were trained in facilities located inside Bangladesh and under the very noses of DGFI and BDR.”

Can our intelligence agencies identify these terrorists responsible for the birth, organization, training and financing of organizations like the Indian Mujahideen?

Today’s government in Bangladesh has moved firmly against terrorism but when the opposition was in power, at least four major anti-India terrorist training camps were reported in full swing replete with instructors from Al Qaeda and SSG of Pakistan. With millions of illegal Bangladeshi immigrants in India (some three million in northeast and one million plus in Delhi-NCR alone) who have been provided Indian identity under the ‘enlarge vote bank scheme’ by the power hungry polity, how many were trained in those terrorist camps in Bangladesh and surreptitiously smuggled into India will never be known. The LeT being the covert arm of ISI of Pakistan is already hobnobbing with the Maoists in India and consolidating its footprints in the state of Kerala.

Let us not get carried away by illusions of Pakistan’s military becoming answerable to the civilian government. Perhaps we should think of some semblance of civilian authority in Pakistan only when the ISI is de-linked from the military and brought directly under civilian control. That notwithstanding, India needs to do much more to gear up on homeland security. The pace and processes need to move much faster. Taking 22 months to sanction a National Counter Terrorism Centre only indicates the lackadaisical approach we have in countering terrorism.

We need to speed up the pace and cater today for the type of threats including new technology and tactics that the terrorists may use tomorrow.