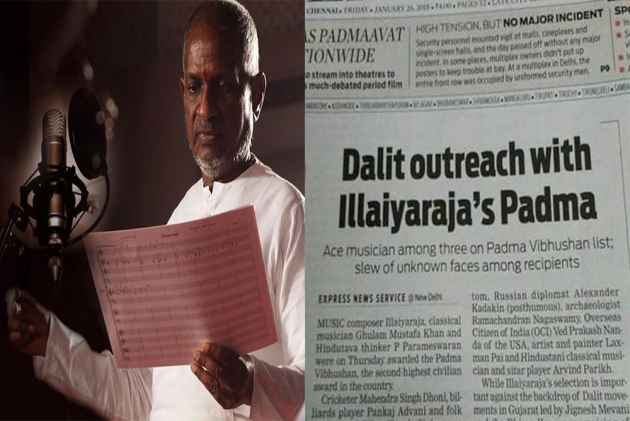 A major Indian English newspaper today issued a front-page apology for a headline it carried on Friday calling the Padma Vibhushan awarded to music maestro Illaiyaraja as the government’s “dalit outreach.”

In its January 26 edition, the newspaper had run a headline on its front page stating, “Dalit outreach with Ilaiyaraja’s Padma”. Illaiyaraja's selection "is important against the backdrop of Dalit movements in Gujarat led by Jignesh Mevani and the Bhima Koregaon uprising of Maharashtra," the newspaper stated. The New Indian Express insinuates that Ilayaraja, a legend, is selected for Padma awards, just because he is a Dalit. Its a shame, on Republic day, New Indian Express shows its feudal mentality, and heaps insults on a legend. pic.twitter.com/5pFHKirOHQ

Ilayaraja given Padma Vibhushan to appease Dalits?What warped thinking!!! Honouring one of the Gods of music is a matter of pride for every Indian. Appalling headline @NewIndianXpress #Ilayaraja

Following it, the newspaper in its today’s edition ran a front-page apology by its editor.

“We apologise for a headline in our edition, dated January 26, regarding music maestro, Mr Ilaiyaraaja, being awarded the Padma Vibhushan, the second highest civilian honour in the country. We wish to clarify that we did not mean to diminish his stature by any means,” it said, adding,  “Mr Ilaiyaraaja is universally acclaimed for his singular achievements in the field of music and the recognition given to him is entirely on this account and no other factor. We deeply regret the wrong message the headline has conveyed.”