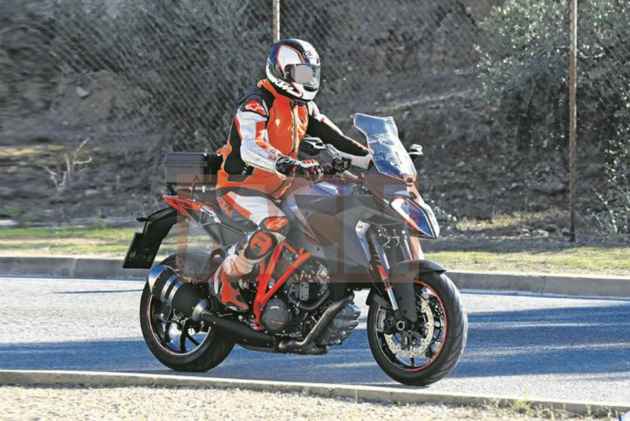 Ever since its debut, the KTM 1290 Super Duke GT has been one of the finest sports tourers out there. However, recently spied images indicate that an updated version of the famed motorcycle may soon be on its way to us sometime in 2018.

Starting from the front, the headlamp unit of the new motorcycle shares a resemblance to that of the Super Duke R. However, it appears to be more protruding now, which is sure to be more effective at channelling airflow. The front cowl has also seen some changes, with the new fairing sitting lower and stretching out further than the older model. The windscreen too has been made larger, to dispense windblast more efficiently. Although, judging from the images, the tank appears to be unchanged at 23 litres. Other changes include a new TFT dashboard, which seems to be carried over from the 1290 Super Adventure range. This TFT display allows the rider to use KTM's MyRide functions and control different riding modes and settings.

Moving away from the cosmetic side, the new Super Duke GT appears to be unchanged at its core, with the familiar frame, suspension, wheels and brakes. However, small changes to the engine casing indicates that some tinkering has been done to the mill. Currently, the ongoing KTM Super Duke GT is powered by a 1301cc V-twin engine. This powertrain churns out 175PS of power and 144Nm of torque, which is available at just 3250rpm. The question that now remains is, will the newer model up the ante in the highly contested adventurer tourer segment? We will have to wait until next year to find out. Until then stay tuned for more updates.