Bangladesh were bowled out for 131 in 41.5 overs and New Zealand raced to victory in the 22nd over with Henry Nicholls making unbeaten 49 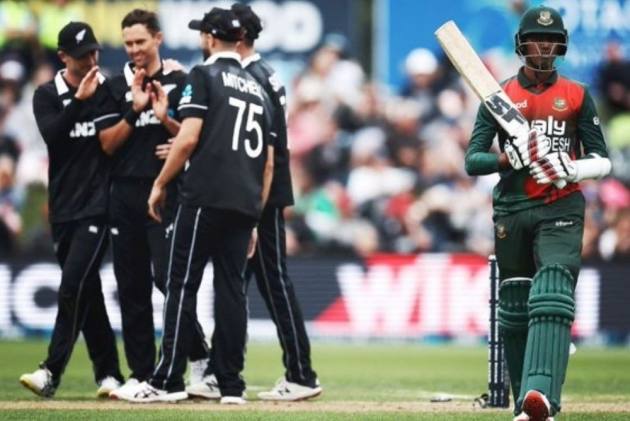 Bangladesh, recently out of managed isolation, was never comfortable in unfamiliar batting conditions at the University Oval and was bowled out by New Zealand in only 41.5 overs. Mahmudullah's 27 from 54 balls was its highest score.

After Martin Guptill crashed 38 runs from 19 balls with three fours and four sixes at the top of the order, New Zealand was always on target to win plenty of overs to spare.

Henry Nicholls made an unbeaten 49 in his 50th ODI to steer New Zealand to victory in the 22nd over, combining in a 65-run partnership for the second wicket with Devon Conway (27).

New Zealand won the toss and sent in Bangladesh in cool and overcast conditions. When Trent Boult produced a late out-swinger with the first ball of the match which surprised and beat Bangladesh captain Tamim Iqbal, it was clear the tourists were in for a tough day.

"It was nice to get over the line and start the series with a win," Boult said.

"We kept them to a decent total and it was nice to chase it down with only a couple of wickets down."

Swing was short-lived but Bangladesh struggled to score freely on a pitch which was slow and holding and against a New Zealand attack which produced containing lines and lengths.

Bowling into the batsmen and pitching short of a length, the New Zealand bowlers — especially Boult who took 4-27 — cut down scoring options both square of the wicket and down the ground.

Bangladesh struggled to 33-2 after 10 overs and posted their 50, with three wickets down, in the 16th over.

Thanks to Guptill, New Zealand's 50 came without a wicket down and in only five overs, and it reached 100 in the 16th over.

Bangladesh had lost all 28 of its previous ODIs against New Zealand in New Zealand, mainly because of the discomfort of its batsmen in conditions which favor the bowlers and the problems its bowlers have had in adapting to those conditions.

The tourists felt they had a chance to break that losing streak on Saturday because New Zealand was without senior batsmen Kane Williamson and Ross Taylor and leading bowler Tim Southee. Tom Latham captained New Zealand in his 100th ODI.

Bangladesh in turn was without the fulcrum of its batting lineup. Shakib Al Hasan was left at home on paternity leave, but coming into this series in form after a 3-0 home series victory over the West Indies, the tourists felt confident.

Apart from Mahmudullah, Mushfiqur Rahim made 23 from 49 balls and Liton Das made 19 from 36.

Boult struck at both ends of the innings, removing Tamim (13) and Soumya Sarkar (0) within three balls in the fifth over, then taking a catch to dismiss Das. He returned to capture the last two wickets to fall.

Jimmy Neesham dismissed Das and Mushfiqur, then had a hand (literally) in dismissing Mohammad Mithun, by deflecting Mahmudullah's straight drive onto the stumps at the non-striker's end after Mithun had left his ground.

Mahedi Hasan, on debut, hit a six for his first runs in ODIs and looked determined to lift the scoring rate but he fell to left-arm spinner Mitchell Santner for 14.

"There were a lot of soft dismissals," Bangladesh captain Tamim said. “No doubt they bowled extremely well but we played some loose shots and we have ourselves to blame."