Once Called 'Living Monument Of UPA's Failures' By PM Modi, Will MGNREGA Help During Covid-19?

Prime Minister Narendra Modi once described MGNREGA as 'living monument of Congress-led UPA's failures'. However, as the ongoing lockdown continues to test the government, it has fallen back to the same scheme. 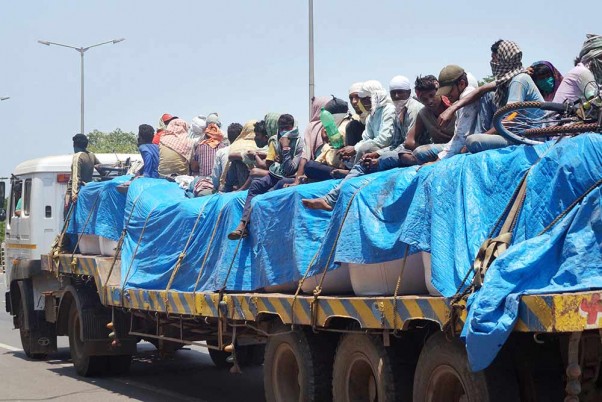 The decision to allocate this amount over and above the Rs 61,000 crore budgeted earlier comes at a time when the nationwide lockdown has forced hundreds of thousands of migrant labourers to move back to their home states. Thousands of men and women, with children on their shoulders, and meagre belongings, have been trudging on highways to get to their homes after the lockdown brought all the economic activities in the cities to a standstill. The reverse migration has been defined as the largest movement of people across India's many states since the partition.

The additional allocation to MGNREGA, Sitharaman said, was to employ migrant workers moving back to their states, adding it "will help generate nearly 300 crore person-days in total".

In Lockdown, Employers Hung Workers Out To Dry. Now They Should Prepare For Changed Labour Market

'One Nation One Ration Card Not A Solution To Hunger Crisis': Social Activist Nikhil Dey

What The Prime Minister Had Said

In February 2015, nine months after he took over the duties of the Prime Minister of India, Narendra Modi stood in the Parliament to respond to the motion of thanks on the President’s address at the start of the budget session. The Prime Minister spoke on whether or not his government would continue the MGNREGA -- Congress party's flagship programme guaranteeing 100 days of manual work every year to at least one member of every village household.

With a smirk on his face, Modi asked: "Do you think I will disband the scheme? My political wisdom does not allow me to do it. This is a living monument of your failure to tackle poverty in 60 years."

He continued: "You had to send people to dig ditches and pay them. With song and dance and drum beat, I will continue with the scheme."

Speaking to Outlook, social activist Nikhil Dey said that of all the things the government had been saying so far, the additional allocation of funds was the most "significant one" considering the current migrant crisis.

Dey said the additional allocation of funds should be seen as the first step among a series of steps to be taken in response to this crisis. "In the first instance, given that the extraordinary crisis that exists today, MGNREGA should move towards becoming an open-ended entitlement allowing every individual to work for at least 200 days," he said.

He added the current circumstances are direr than any of the previous calamities, and, therefore, this immediate increase in coverage and entitlement is necessary.

"This will require at least double the current enhanced allocation, to deal with the ongoing disaster. Besides, it is important to put in place a framework for operationalizing an urban employment guarantee programme."

There was already a dire need for an urban employment guarantee programme, he said, "the crisis has made it urgent and imperative."

Opening works in every village and enlisting "demand for work at the worksite so that work can be provided immediately and whenever demanded," and to proactively provide returning migrants with temporary job cards are the two major suggestions Dey makes.

Will it be enough for such a large number of people returning home? Dey responds: "It can't, but it's a fallback, and that's why we are also asking for an urban employment guarantee scheme." He added that it won't be easy to "convince these migrant labourers" to return to urban centres for work, adding, "as it is they had very insecure unemployment."

MGNREGA or even an urban employment guarantee scheme won't be enough for the country to survive, Dey said, adding "but it's a very important means by which you give a degree of livelihood security to the people."

In July 2019, Union Rural Development Minister Narendra Singh Tomar said the Modi government was not in favour of "continuing with MGNREGA forever" as it is for poor.

“I am not in favour of continuing with MNREGA forever. Because it is for the poor and the government wants to eradicate poverty from India and is working in this direction,” he had said.

PM Modi, too, has made his distaste for the programme amply clear in the past, but the present migrant crisis resulting from the nationwide lockdown has, once again, proved that in trying times, MGNREGA is one scheme both people and the government can and have fallen back to.