The Prime Minister’s Ladakh visit is unlikely to affect the ongoing efforts by Indian and Chinese commanders on the ground or diplomats in Delhi and Beijing working at bringing down temperatures. 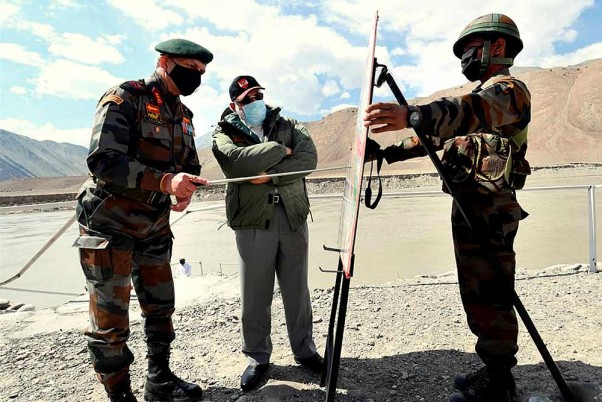 Prime Minister Narendra Modi’s surprise visit to a forward post on Friday is a major morale booster for Indian troops engaged in a military face-off with China in Ladakh. The optics around the visit will reassure not just the soldiers but also their families that the Prime Minister cares.

There was fulsome praise for the soldiers in the Prime Minister’s speech in Nimu. “Every single Indian across the world, especially in India, has the belief that you all can deliver and keep the nation strong and safe. Your courage is higher than the heights where you are stationed. Your arms are as strong as the mountains that surround you. Your confidence, determination, and belief are as atal (immovable) as the peaks here,” he said.

Without naming China, Modi sent out an indirect message to President Xi Jinping, who he had entertained just last year in the coastal town of Mahabalipuram, about 60 kilomteres south of Chennai. “Days of expansionism are over. Expansionist forces only create hurdles in global peace. They have either been defeated or forced to retreat. The world wants peace, security and development,” the PM said in his address to the soldiers. It was a clear reference to China’s penchant for salami slicing territory from its neighbours, whether in Ladakh or around the South China Sea where it has disputes with Vietnam, the Philippines, Malaysia, Brunei, Taiwan, and Indonesia. Modi did not venture beyond that, aware that moves to defuse the crisis is on.

‘Era Of Expansionism Is Over’: Top Quotes From PM's Ladakh Speech

The Prime Minister’s visit is unlikely to affect the ongoing efforts by Indian and Chinese commanders on the ground or diplomats in Delhi and Beijing working at bringing down temperatures. India wants the status quo ante to be restored. Simply put, both armies must go back to the positions held in April before the intrusions began.

“The signal to China is Modi’s commitment to the territorial integrity of India, but not in an aggressive way,’’ says former diplomat PS Raghavan, who had served as a joint secretary in Atal Bihari Vajpayee’s PMO.

Strategic analyst Bharat Karnad says, “Modi has resisted labeling China as the aggressor despite evidence of Chinese brutality and occupation of Indian territory and in the face of the rising antipathy of the people against that country. With his air-dash to Nimu in Ladakh, he has tried to assuage public sentiment with the optics of a wartime leader firing up the fighting spirit of the Indian forces at the front.’’

Modi, a master in messaging, has taken the country and his political opponents by surprise. It was Defence Minister Rajnath Singh who was to visit Leh on Friday. But late Thursday night his visit was re-scheduled. There was no explanation. However, the PM’s dash to Nimu is a signal from the highest level of the political leadership in the country that the nation appreciates the sacrifices of the Indian army.

Though Nimu is over 200 kilometers from Galwan Valley, the site where the Indian and Chinese troops are locked in a stalemate, and where 20 Indian soldiers were killed on June 15, Prime Minister’s visit to the forward post will familiarise him with the terrain.

Far too much is being made of Modi’s visit. Most Prime Ministers do this. The social media has been afloat in the last 10-days or so with pictures of former Prime Minister Jawaharlal Nehru visiting troops in 1962, when India was badly bruised by China in the short border war. Nehru’s daughter, Indira Gandhi, as prime minister in 1971, visited the western front, which was tougher than the east where the army was fighting together with the Mukti Bahini. The Pakistan army was overwhelmed and surrendered in Dhaka. From George W.Bush to Barack Obama, American Presidents have visited frontline troops both in Iraq and Afghanistan.

On the day of the PM’s surprise visit to Ladakh, Chinese foreign ministry said neither of the countries should engage in any action that might escalate the situation along the Line of Actual Control (LAC). Whether they were reacting to the PM is not known. "India and China are in communication and negotiations on lowering the temperatures through military and diplomatic channels. No party should engage in any action that may escalate the situation at this point," Zhao Lijian, Chinese Foreign Ministry spokesperson was quoted as saying.

But China, at this moment, is occupied with Hong Kong protests and criticism from the West over the new security law. In a press release issued by the embassy, China hit out at critics: “Full of ignorance and bias against China, some people from the US and other Western countries have made groundless accusations and disseminated many fallacies about China’s human rights conditions concerning Hong Kong, Covid-19 and Xinjiang.’’ The release goes on to refute all allegations.

Clearly, the PM’s visit and Ladakh is not what is agitating China right now.