In Rajan, Rahul found the voice of a credible, globally-respected economist to endorse every diatribe the Congress party has fired against the Centre in wake of the health pandemic and beyond it, writes Puneet Nicholas Yadav. 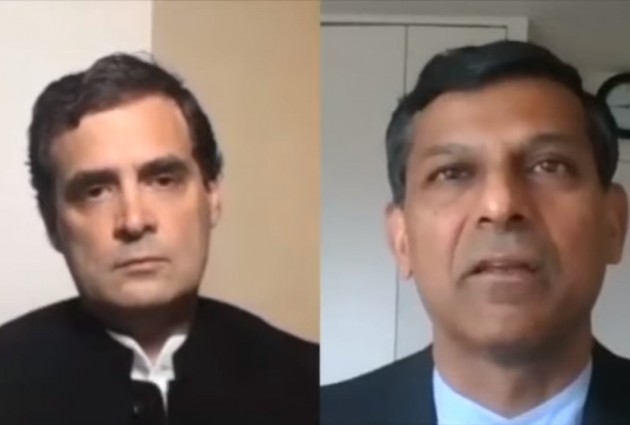 With the Centre groping in the dark for an exit strategy to transition into the post-lockdown phase and a comprehensive plan to offset the economic impact of the coronavirus threat still out of sight, Congress leader Rahul Gandhi is clearly having a field day. On Thursday morning, the Wayanad MP had a 28-minute conversation with former RBI governor Raghuram Rajan that was shared across social media platforms. The discussion was essentially Rahul’s way of securing validation for his party’s broadside against the Centre’s mishandling on the COVID-19 pandemic from Rajan, who also just happens to be someone the BJP detests.

The gist of the Rahul-Rajan interaction was that India is still not testing enough to ascertain the extent of the COVID-19 spread; there is urgent need for a financial package for the poor; excessive centralization of powers by the Narendra Modi government is a hurdle against quick recovery from the crisis; the continuance of a parallel “infrastructure of hatred” and disharmony is counter-productive and that India needs a new vision for governance. It is no surprise that each of these issues have, ever since the coronavirus pandemic surfaced in India, been part of Rahul’s ammunition against the Modi government and the BJP.

In Rajan, Rahul found the voice of a credible, globally-respected economist to endorse every diatribe the Congress party has fired against the Centre in wake of the health pandemic and beyond it. That Rajan became a household name for India’s elite and middle-class during his stint as a popular RBI Governor (September 2013 to September 2016), only adds more firepower to the Gandhi scion's accusations against the Modi government’s lack of preparedness in dealing with the pandemic and its economic cost.

In India's deeply polarized political discourse, Rajan, of course, is in the same league of renowned economists like Amartya Sen, Abhijit Banerjee, Jean Dreze and others who are reviled by the BJP and its supporters for prescribing policy measures that are at variance with the Hindu-right’s prescriptions. It is, thus, no surprise that as soon as the Rahul-Rajan conversation went live on Facebook, YouTube and Twitter, there was a parallel coordinated campaign on these social media platforms to malign the economist.

Rajan was among the architects of the Congress party's NYAY scheme which Rahul had promised ahead of the Lok Sabha polls if his party came to power. Of course, the Congress lost badly at the hustings but the coronavirus pandemic has allowed Rahul to harp about the need for a NYAY-like scheme in these trying times to put money in the hands of India's poor. The other speculation about Rajan during the Lok Sabha polls was that the Congress could have roped him in as finance minister if it had romped to power; another stillborn idea.

The merits of Rajan’s utterances –- even if they were largely a reiteration of what Rahul and the Congress have been saying incessantly for the past 40 days -– cannot be disputed. He spoke about the urgent need for the Centre to provide for a Rs 65,000 crore stimulus package for the poor -– the politically-loaded statement was unmistakable here as Rajan played along with Rahul to speak on this in Hindi as against the otherwise English conversation. Even if Rajan’s calculation was more conservative than what has been put forth hitherto by Congress leaders, it got the point across -- the BJP government was just not doing enough to help crores of Indian poor. Similarly, Rajan spoke about the need to decentralize -– even mentioning the Panchayati Raj system brought to India’s statute books by Rahul’s father, Rajiv Gandhi -– was crucial in these times.

Rahul has indicated that his conversation with Rajan is only the first in a series of discussions with domain experts on the way forward for India. Outlook had reported earlier that the Nehru-Gandhi scion wanted his party to rope in subject experts like Rajan for specific recommendations the party can make on how to best deal with the pandemic and its fallout. The 11-member consultative group constituted by interim Congress president earlier this month with former Prime Minister Dr. Manmohan Singh as chairman and Rahul as member, has been meeting regularly to thrash out policy prescriptions. A detailed plan for financial assistance to the MSME sector has already been made and sent to the Centre while others on the agrarian crisis, migrant and working class, health sector, etc. are in the works.

On the face of it, the Rahul-Rajan conversation was all about dealing with the pandemic and its impact on our lives but the subtext of it was deeply political. It sought to position Rahul, for the umpteenth time though, as a leader who wanted the best minds in different fields to help India move ahead as opposed to a leader who wants to thrust his "Mann ki Baat" on others. It also bolstered Rahul’s new-found desire to make “constructive suggestions” to a government that remains hostile towards the Congress and its first family.

The Modi government has quietly been accepting some of these recommendations, predictably without acknowledging that they came from the rival camp. Rahul, however, hasn’t lapped up at this undeclared surrender by the BJP to take credit for the Centre’s decisions; he has left that to party leaders to do so. The Wayanad MP has dumped his proclivity for perpetual Modi-centric criticism to adopt a more pragmatic strategy of letting "apolitical" people with a credible reputation in their respective fields to highlight the government’s failures.

With rumours abound over Rahul’s imminent return as Congress president, the coronavirus pandemic may have given the Nehru-Gandhi scion just the opportunity he needed for an image makeover. The unkempt look, an angry young man demeanor and the propensity for gaffes have been replaced with an appearance that is inching closer to his father Rajiv Gandhi’s and a studied understanding of subjects before taking to the microphone. Of course, given past experiences with Rahul, it remains to be seen whether the Wayanad MP will stay this course or abandon it in haste as soon as the lockdown is lifted affording him a get-away opportunity. But for now, Rahul seems to be using the lockdown hours judiciously.