Rajapaksa's Party Slated to Win Sri Lankan Polls, But Will Voters Give Them A Super Majority?

A two-thirds majority for Rajapaksa brothers’ party could allow them to amend the Constitution and restore presidential powers that were diluted in 2015. 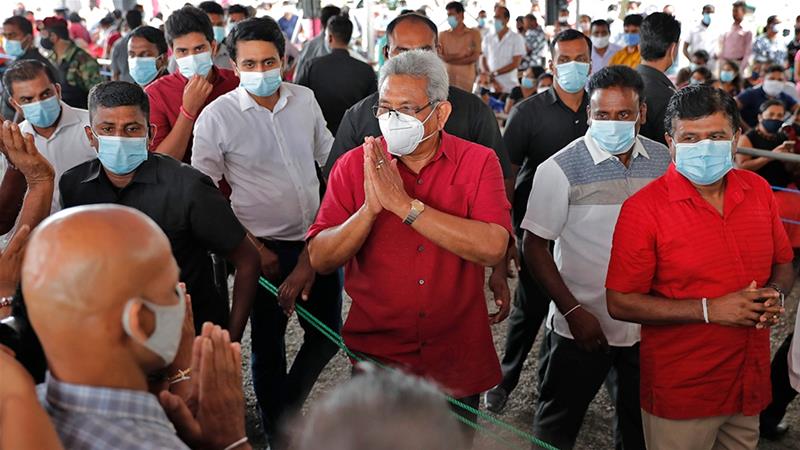 Sri Lanka will vote in the parliamentary elections Wednesday with the Sri Lanka Podujana Permuna (SLPP)—the regional party formed by the Rajapaksa brothers—expected to win. However, the question is whether the SLPP will get the two-thirds majority it is hoping for, a win that could allow them to amend the Constitution and restore presidential powers that were diluted in 2015.

Much like in India, the main Sri Lankan opposition—United National Party (UNP)—is in the doldrums. It has imploded with a section of the younger members walking away from former prime minister Ranil Wickremesinghe’s party. The main opposition challenger is Sajith Premadasa, leader of another powerful political dynasty. His father was president Ranasinghe Premadasa, a grassroots politician who was once much loved by the people. Ranasinghe is remembered in India for his opposition to the India-Sri Lanka accord of 1987, and also as the president who joined hands with the Liberation Tigers of Tamil Eelam (LTTE) to throw out the Indian Peace Keeping Force (IPKF) from the Sri Lankan soil.

Sajith broke away from the UNP after a fallout with the senior stalwarts and formed the Samagi Jana Balawegaya (SJB), a new political outfit. Instead of concentrating their energies on fighting the ruling SLPP, the SJB members are busy settling scores among themselves. So the field is clear for the SLPP to romp home.

Liberals in Sri Lanka are, however, hoping that people will not give the SLPP the supermajority it is campaigning for. The Rajapaksa brothers are overwhelmingly popular among large sections of the Sinhala Buddhist majority in the country. It was after all during Mahinda Rajapaska’s presidency that the LTTE was eliminated and the Tiger supremo Prabhakaran was killed. Current President Gotabaya Rajapaksa was the defence secretary and played a crucial role in the defeat of the LTTE. That victory made the Rajapaksas immensely popular among Sinhala majority. It also gave rise to Sinhala chauvinism and stamping out of all dissent in the island. NGOs, journalists, and human rights activists became the target of government high-handedness.

This is what people are now afraid of. If the opposition in the Parliament is weak, the government will be in a position to do pretty much what it wants. After the 2019 presidential elections, the parliament did not reflect the change in the power structure; it was dominated by the opposition. President Gotabaya as well as Prime Minister Rajapaksa found it difficult to govern. So, in March the Parliament was dissolved six months ahead of its schedule and elections were announced for April 25. But due to the Covid pandemic, the polls were postponed to August 5.

In the north and east, the Tamil National Alliance (TNA) too is facing competition from new political outfits. The TNA and most Tamil parties will be opposed to Rajapaksa brothers. During last year’s presidential elections, Sajith could gather all the Tamil votes. Because of the family’s history, there is a soft corner for Sajith among Tamils. The people of the north and east will naturally vote for the Tamil parties. This gives a stronger hope to the ruling dispensation.

The SLPP wants two-thirds majority to be in a position to scrap the 19th amendment of the Constitution which had scaled down the powers of the executive president and restored the supremacy of the prime minister. The government wants more power for the president, though, at the moment, with his brother as the PM, there is no major problem. The SLPP did not have the numbers to make suitable legislation in the last Parliament.

The 19th amendment to the Constitution was passed in April 2015 when the national coalition government with the UNP’s Sirisena as President and Ranil Wickremesinghe as prime minister joined hands to defeat Rajapaksa. The amendment was to ensure that president’s power is balanced by the PM.

There is a chatter in Colombo about the Rajapaksa brothers planning a new Constitution for the island state, but no details are out. Victory is assured for the ruling SLPP, but by what margin remains to be seen. The hope is that the opposition members also get elected in sufficient numbers to ensure that one-party rule is avoided.