Political observers believe the sedition case will only add to Kanhaiya’s appeal as a politician and may well boost the chances of the formation of a non-NDA, non-RJD front under his leadership ahead of the state assembly elections. 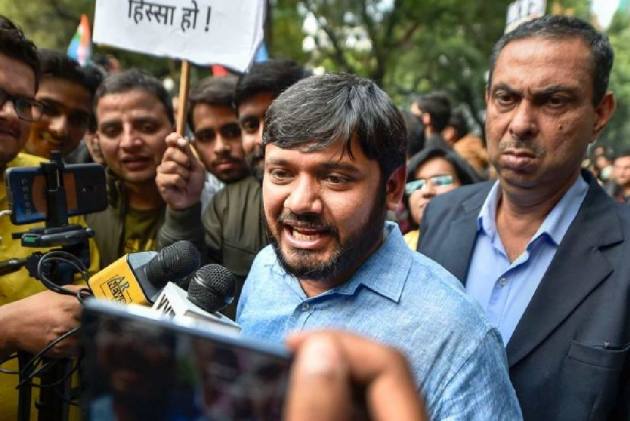 No matter how the sedition case against former JNU Students' Union President and CPI leader Kanhaiya Kumar ends, it won't harm him politically ahead of Bihar elections.

The Arvind Kejriwal-led government's go-ahead to prosecute Kanhaiya, along with nine others in a sedition case for allegedly shouting anti-India slogans during an event on the JNU campus in February 2016, came just a day after he concluded his "Samvidhan Bachao, Nagarikta Bachao (Save the Constitution, Save Citizenship)" campaign with a massive rally at Gandhi Maidan in Patna.

In the run-up to his Patna rally, Kanhaiya had travelled across Bihar, crisscrossing almost 4,000 kilometres to drum up people’s support against the CAA, NCR and NPR. At many places, his convoy was attacked, vehicles damaged but he managed to draw good crowds at his rallies over the past few weeks.

People thronged to listen to him for fiery speeches he is known for, and he did not disappoint them by hitting out at both the Centre and the Nitish Kumar government in his inimitable style.

Political observers believe the sedition case will only add to Kanhaiya’s appeal as a politician and may well boost the chances of the formation of a non-NDA, non-RJD front under his leadership ahead of the state assembly elections due later this year. It is also expected to revive the fortunes of the CPI in the state where it appears to have lost its moorings in the past two decades or so.
In the previous few assembly elections, Bihar had witnessed a direct contest between Nitish Kumar-led NDA and the RJD-led alliance.

All attempts to stitch up a formidable third front had come a cropper primarily because of the dearth of any popular leader from its ranks. Kanhaiya is looked up by many as competent enough to fill that slot.
But how are his rivals looking at him? The NDA has so far refused to take cognisance of Kanhaiya’s rise on the political firmament in Bihar. Most of its local leaders had written him off after the loss of the young leader by a margin of over 4 lakh votes to BJP’s Union minister Giriraj Singh from the Begusarai constituency in the Lok Sabha elections last year. But, as the recent assembly elections in Delhi have indicated, parliamentary poll results are hardly a fool-proof yardstick to pre-judge the mood of the electorate anywhere.

Bihar is, of course, not Delhi and the electoral equations in the two states cannot be compared. Apart from the perennially dominant caste factor, Bihar has had Nitish Kumar, a chief minister with proven track record, at the helm for the past 15 years. This time again, the BJP has announced that he will remain the chief ministerial candidate of their alliance. Its principal opponent will again be the RJD-led alliance and it is unlikely that Lalu Prasad or for that matter Tejashwi Prasad Yadav would like to join forces with Kanhaiya in their bid to prevent Nitish Kumar to return to power for his fourth consecutive term. In the last general elections, RJD had refrained from supporting Kanhaiya and fielded its own candidate from Begusarai, which had further soured their relations. Political pundits believe that Lalu does not want any youth leader like Kanhaiya to emerge as a challenger to Tejashwi in the long run.

It is, therefore, unlikely that the coming elections will see Tejashwi and Kanhaiya joining hands for their common mission to defeat NDA in Bihar. It was amply reflected recently when RJD kept a distance from Kanhaiya’s rallies across the state. There is another reason behind that. A large chuck of CPI supporters had switched over to Lalu’s camp after the Yadav satrap’s rise on the social justice plank in the 1990s. Now, the RJD would not like any CPI leader like Kanhaiya to gain enough popularity to woo back any segment of its traditional vote bank, especially the poor and marginalised sections.
Hence, Kanhaiya will have to hope and work for a CPI-led alliance consisting of relatively smaller parties in order to provide the third alternative to the Bihar voters in October-November polls. It may be too early to even conjecture whether he will be able to leave a mark in the electoral battle at the end of the day but his presence will certainly enliven the poll season. In the run-up to the assembly elections, an ongoing sedition case will surely keep the focus on him longer than what his detractors would like.