A bench headed by Jawad Rahim also directed the BJP MP from Mathura and the Authority to undo any damage done to the floodplains. 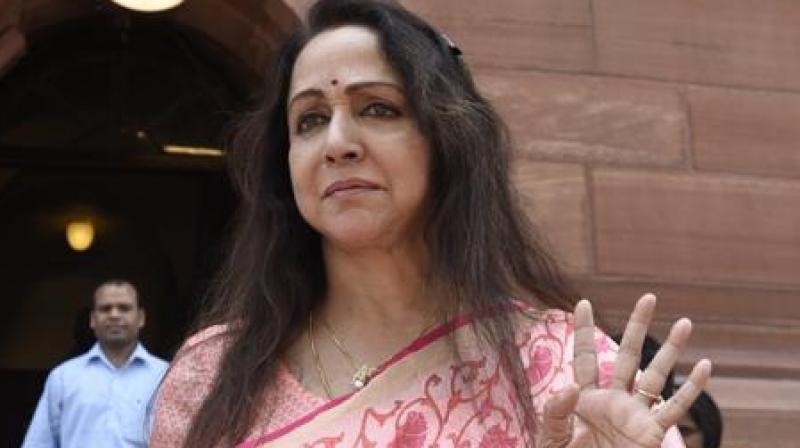 The National Green Tribunal(NGT)has directed actor-turned-MP Hema Malini and the Mathura Vrindavan Development Authority to ensure removal of debris, if any, lying on the banks of Yamuna following preparations for two-day 'Rangotsav' festival.

A bench headed by Jawad Rahim also directed the BJP MP from Mathura and the Authority to undo any damage done to the floodplains.

It passed the order while disposing of a plea seeking a stay on the cultural event to be held on the Yamuna floodplains in Mathura.

The green panel noted the submission of the Uttar Pradesh government that the event, which was likely to be held on the proposed site, has been shifted to some other place.

The state government is planning to organise 'Rangotsav' (festival of colours) in Mathura and Barsana to commemorate the traditional 'Latthmaar Holi'.

"Be that as it may, in case any debris has been dumped and if any activity has taken place on the bank of river Yamuna, the same shall be removed and damage if any shall be set right by the Respondent No 2 (Development Authority) and 5 (Hema) under the supervision of UP Pollution Control Board and District Magistrate concerned," the bench said in its recent order.

The NGT had earlier directed the UP pollution control board and the National Mission for Clean Ganga to inspect the site on the Yamuna floodplains opposite the historic Vishram Ghat in Mathura and submit a report.

The tribunal's direction came on a plea filed by Mathura-based organisation Shree Mathur Chaturved Parishad seeking a stay on the two-day event on the grounds that construction on the riverbed was being carried out in contravention to the Ministry of Water Resources 2016 notification.

The petition had said that the activity proposed on the riverbed would require construction of stage and other ancillary arrangements to host nearly 5,000 people.

It had sought directions to restrain the authorities from carrying out any further organisation of the proposed activity on the riverbed and floodplain of Yamuna.