Sibsagar MLA Akhil Gogoi was acquitted in the Chandmari police station case, the second and last case against him in connection with the 2019 anti-CAA protests. 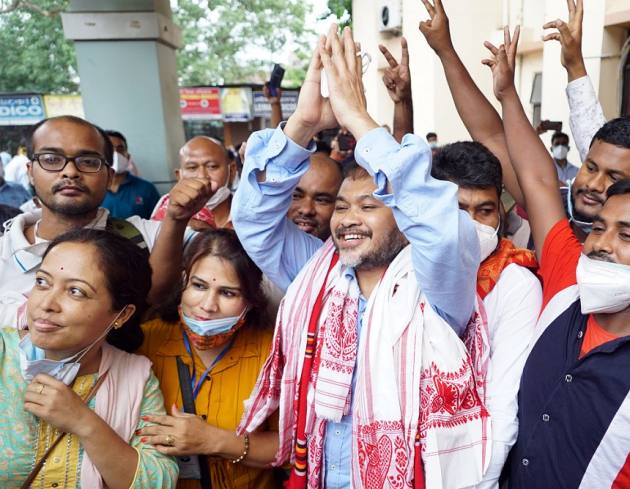 Sibsagar MLA and activist Akhil Gogoi walked out a free man after more than one-and-a-half years on Thursday afternoon as a special NIA court in Guwahati earlier in the day absolved him of all charges, including those of terrorism under UAPA and sedition under IPC, in a case -- the second and last -- in connection with anti-CAA protests in 2019.

Gogoi stepped out of the Gauhati Medical College and Hospital, where he was undergoing treatment for some time, to a rousing welcome from a large number of his supporters gathered after prison authorities completed the formalities of release there. Gogoi has been in jail since December 12, 2019 after he was arrested from Jorhat. Three others-- Dhaijya Konwar, Bitu Sonowal and Manas Konwar -- were also acquitted in the same case at Chandmari police station in Guwahati. The three were out on bail but Gogoi’s bail petitions were earlier rejected by Gauhati High Court.

The court made it clear that it was far from impressed with the way the NIA conducted the investigations. "Before concluding the discussion, this court is constrained to observe, in the interests of justice, that the court has found the conduct and approach of the investigating authority / prosecution in this case, to be discouraging, to say the least. The court has high expectations from a premier investigating agency like the NIA, entrusted with the profoundly important task of protecting our country and us, citizens from the menace of terrorism. The court hopes and expects that, such high standards will be upheld, for sake of the country and this one will be just an exception," it said.

From The Ballad Of Indian Gaols

They Just Hate Dissent, How North East Police Flexes Its Muscle Or Is It The BJP?

‘Save Me, I Shall Always Speak For You’: Akhil Gogoi Appeals To People Of Assam

Akhil's lawyer Krishna Gogoi told reporters that the NIA court absolved him and the three others of all charges under Unlawful Activities (Prevention) Act and sections of IPC including one relating to sedition. "All have been cleared due to lack of materials to frame charges," he said. The court had on June 22 acquitted Gogoi in the case at Chabua police station in Dibrugarh district also at the stage of framing of charges.

The court held that “if in a case there are no materials or no sufficient materials to frame charges against the accused person(s), the ends of justice demands that the accused be discharged, without making him suffer the process of trial.”

Stepping out of the hospital, he demanded that Union home minister Amit Shah, Assam chief minister Himanta Biswa Sarma and NIA director general should resign in view of the fake charges slapped on him. “It is a historic case. This is the first time that a premiere agency as the NIA was unable to satisfy the court and failed to even frame charges,” he said. He said the court’s verdict proved the judiciary’s independence at a time when there is an attempt to bring it under the control of the executive and thanked the framers of the constitution. He said had he not been in jail, the BJP would not have won the recent assembly elections. “They wanted me to remain in jail,” he said adding they had crushed the anti-CAA movement but he would continue to oppose its implementation in Assam. He said he would first visit the family of Sam Stafford, who had died along with four others in police firing during the protests against CAA. He would also subsequently visit the other four families.

Advocate Upamanyu Hazarika said the court’s order has established that Gogoi and his associates have not committed any terrorist act threatening the unity, integrity and sovereignty of India. He said Gogoi’s speeches (in Chabua case) were not incitement to violence and there was no material to link him with vandalism and damage to property that took place during the CAA agitation.

“The court significantly observed that protest in a democracy can take the form of bandhs and blockages, and if not accompanied by violence would not be a terrorist act. The court also found no material that shri Gogoi made any imputation against the unity, integrity and sovereignty of India,” he said.

“It is singularly unfortunate for our democracy that political opponents are muzzled by slapping false charges and Shri Gogoi and his associates have been deprived of their personal liberty while resorting to democratic means of protest. The judgement while re-affirming public faith in the Judiciary is also a stern warning to the ruling class against resorting to undemocratic means against the opposition,” Hazarika said in a statement.