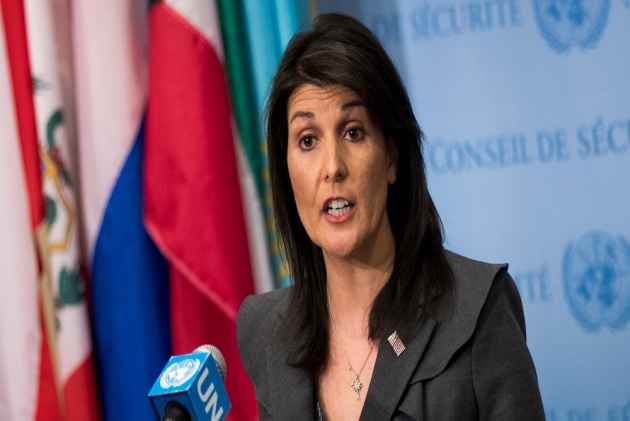 United States ambassador to the United Nations Nikki Haley has said that the rumours of her having an affair with President Donald Trump are "disgusting" and "highly offensive".

While talking at Politico's podcast 'Women Rule', Haley said that these rumours were typical of the challenges faced by strong women who manage to work their way up to positions of power, according to The Guardian.

She said, "It is absolutely not true. At every point in my life, I've noticed that if you speak your mind and you're strong about it and you say what you believe, there are a small percentage of people that resent that. And the way they deal with it is to try and throw arrows - lies or not - to diminish you".

The rumours were sparked by the comments made by Michael Wolff, author of the book 'Fire and Fury: Inside the Trump White House', during an appearance on HBO's 'Real Time with Bill Maher'.

In his interview, Wolff had said that he was "absolutely sure" that Trump is having an extramarital affair, but said he omitted the claim from his book 'Fire and Fury' because he was not able to substantiate it.

The comments led to speculations that he was talking about Haley, who, he wrote, spends a "notable amount of private time" with Trump on Air Force One.

"I have literally been on Air Force One once and there were several people in the room when I was there", noted Haley.

Haley also shared that the attacks don't deter her from doing her work.

This is not the first time such claims have been made against Haley.

She encountered similar claims throughout her political career, including during her campaign to become governor of South Carolina.