For us locals, Ooty's charm has been destroyed by bus-loads of the worst kind of tourists. 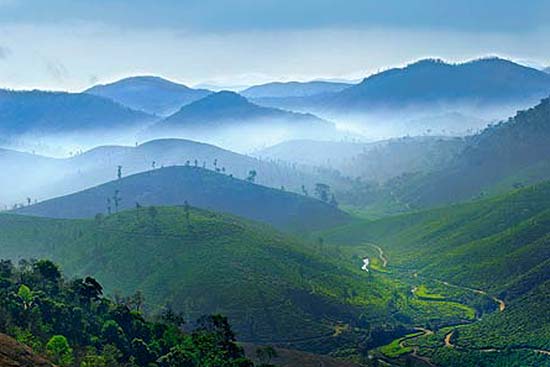 Not many tourists who invade the Blue Mountains every summer know that Nilgiri literally means 'blue mountain'. I first visited the Blue Mountains for the first time in 1985 and was enchanted by Kotagiri. It was, and still is, a pristine, unspoilt Nilgiris gem. The effect of the swirling mist, charming stone cottages with red tiled roofs and creeper roses is added to by the tea plantations which give the hillsides a manicured look. It's a throwback to the Raj-era. The tea estates have names like Sussex, Surrey, Woodbriar and Glen Morgan.

The guest houses are manned by a legion of well trained ABCD's (ayahs, butlers, cooks and drivers) who speak "butler English" in a unique manner and 'yes-sir, no-madam' the new brigade of brown sahebs. Slightly condescendingly, I suspect. North Indian tourists are invariably put out by the fact that Nilgiris folk speak fairly good English but not a word of Hindi. The Raj-era theme extends to the colonial-style clubs. They provided temporary solace from the loneliness of plantation life. Many planters lived alone, their wives preferring city life and children banished to boarding schools.

If you were lucky enough to be invited to the Manager's house, it would be a sprawling bungalow perched on a hilltop with a stunning view, colonial verandahs, beautiful gardens and a legion of servants trained in hospitality. Alas, times have changed.

The biggest change is in Ooty, officially Udhagamandalam, once Queen of the Nilgiris. For us locals, Ooty's charm has been destroyed by bus-loads of the worst kind of tourists. The summer 'season' is hell. On the days of the legendary Flower show, locals stay safely indoors to escape the tourist onslaught. More recently, marauding outsiders have been buying up land here for holiday homes. Some of it has helped since those with money have restored dilapidated heritage houses to their former glory.

The downside is that concrete monstrosities deface the once beautiful hillsides. Ooty's real charm lies in the little winding roads away from the madding crowds. Some old favourite haunts are the one hundred year old West Coast bakery where we buy ginger biscuits and other items. I discovered the world's best hot-cross buns there one Good Friday. For superb dosas and coffee, Nahar is a must. Ooty chocolates are famous, probably born out of the cravings of the thousands of boarding school kids who descend on Ooty and Coonoor for 'tuck'. A favourite is the original Kingstar on Commercial Street.

For those planning a visit, a good-value-for-money option is the Anandgiri YMCA. Closer to Coonoor is Acres Wild run by Bombay couple Tina and Mansoor Khan who've built up a good reputation. Tina also offers cheese making lessons---the Coonoor Cheese Queen according to Mansoor's blog. Mansoor Khan directed the hit film Qk which starred his cousin Aamir Khan before he quit Bollywood and moved to his Conoor farm. Today, Coonoor shares Ooty's problems of clutter, garbage and overcrowding. It gets prettier once you leave the town centre and head out. Everywhere, there are stunning gardens. Even the poor take time to plant a few geraniums or roses.

Wellington Staff College, home to our brave and wonderful Armed forces is worth visiting, though their ugly barrack-like buildings are an eye-sore on the landscape. Some innovative re-designing would go a long way towards improving the visual effect.

Climbing down to the plateau, you arrive at Gudalur, an important stop at the tri-junction of Kerala, Karnataka and TamilNadu. It's a bustling town now, thanks to booming pepper prices. It's the only place where tea and coffee grow happily near each other. In March, at coffee blossom time, Gudalur estates turn quite spectacular. The new wealth is visible on our main road with several new Gulf-type glass fronted jewellery shops and a proliferation of eating places.

We tend to take our little town for granted but foreigners have gasped , 'It looks like Switzerland'. And the hills are certainly alive. Everyone's had a dog or two taken away by lurking leopards. Deer feast on our gardens. But its home and we love it. Locals often refer to Gudalur as the step-child of the Nilgiris.

En route to Mudumalai Wildlife Sanctuary you can see why we consider ourselves hard-done-by. After hitting Mudumalai, the road turns into a ditch. Near Kargudi there is no road, just a river bed. It has been thus for the thirty odd years I've lived here. You know you have moved out of Gudalur taluka into Karnataka or Kerala by the state of the road. Every day the tourists throw their garbage on our roadsides. I wonder why we do not impose huge fines on the litterbugs. We need more staff, equipment and rubbish bins to stop the desecration of our beautiful forests.

Mudumalai should be our pride and joy. It is teeming with wild life-leopards, elephant, bear, wild boar, several kinds of deer and monkeys, the occasional black panther and tiger. We also have a healthy, growing tiger population, living in the most diverse kinds of forests, from dry open scrub jungle, to deciduous forests, to very wet rainforests, up to the rolling grasslands and Sholas in the mountains.

There are far too many tourists and resorts now, on the Masinagudi road. The older ones with character are Bamboo Banks, Jungle Hut and Jungle Retreat. Jungle Hut owner and dear friend, the late Joe Matthias was a legendary John Wayne-like character. A superb raconteur, he would regale guests with wildlife stories. His favourite was of Hollywood actor Goldie Hawn who visited Jungle Hut and adored the place. From Mudumalai lies the faster way up to Ooty with 36 breathtaking hair-pin bends. Good brakes are essential.

The Nilgiris is also a birder's paradise. About 14 kilometres from Gudalur lies Devala, the rainiest spot after Cherapunji. Recently opened, 4 kilometres away is a back-to-nature and birder's paradise called Ecoscape. Very down to earth and local, it is run by adivasis trained by Ankur an intrepid Delhi lad. According to Tripadvisor, most Birders vow to return, braving the torrential rain and monsoon leeches.

Everyone knows the Todas around Ooty. But few have heard of the other original residents. The Irulas, Kotas and Kurumba tribes inhabit the higher regions. In the lower Gudalur Valley live the Paniyas, Bettakurumbas, Mullakurumbas, Kattunaickens and Irulas. The British took over large tracts of tribal land to plant tea after Sullivan, the saheb who 'discovered' a haven for the colonial Madras rulers to escape to every April. Ooty became the summer capital. It marked the beginning of the end of the adivasi's undisturbed co-existence with nature.

Nilgiri's people are nicer. Our hills are relatively free of destructive casteism since everyone except the adivasis migrated here, jettisoning rigid practices prevalent in ancient caste based villages. Our Blue Mountains is supposedly the most written about place in the world because anthropologists were fascinated with its tribes in general and the Todas in particular. The Todas are famous for their spectacularly beautiful woven shawls and their silver jewellery. The Nilgiris is unique and special for many reasons; but you need to get off the beaten track to truly appreciate its spectacular natural beauty.