The NITI Aayog team, led by the Vice-Chairman, held a meeting with Andhra Pradesh Chief Minister Y S Jagan Mohan Reddy to discuss over a wide range of issues 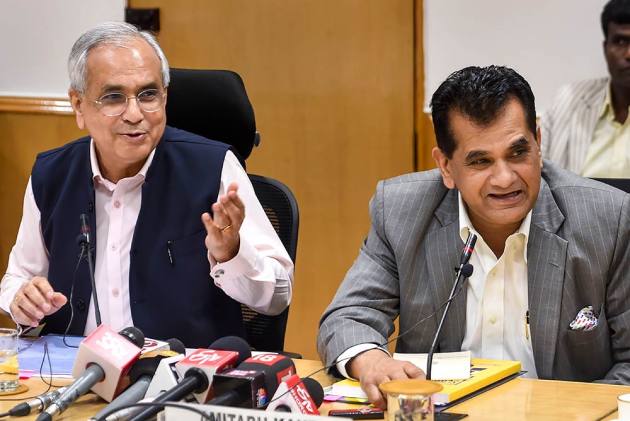 Speaking at a meeting with Andhra Pradesh government, NITI Aayog Vice-Chairman Rajiv Kumar said that they have begun engaging with all states to "develop together" by sharing ideas in the spirit of cooperative federalism.

"This is a part of our effort at cooperative federalism that we want to visit and engage with all states. Our own hope and our own vision is that we will intensify this engagement in a constructive manner, both for discussing ideas for development together and also for facilitating interaction with other Central government ministries and departments," he said.

The Aayog, he said, would also try to sort out contentious issues between states… "like you have with Telangana. We will try and work on that," he added.

Complimenting the AP government for "a lot of very good work done", Rajiv Kumar noted that what’s happening in Andhra was "quite creditable and remarkable".

He hoped that the state would grow on this trajectory. "Some of the measures you have taken are innovative and quite unique, being done for the first time in the country, like the digital libraries, Rythu Bharosa Kendras, decentralising the procurement, etc. We would like to replicate this in other states," the Vice-Chairman said.

Observing that he saw potential in AP, he said the state could really come on tops in the country. "Whatever is required by us to be done, we can do," he assured.

Earlier in the day, the NITI team, on a two-day visit to the state, made a field visit to Veerapanenigudem village near Vijayawada and interacted with the farmers engaged in natural farming. The team visited the mango field of a farmer B Krishna Reddy to study the intercropping with black gram. It also visited a mango orchard where 14 fruit varieties were grown.

Rajiv Kumar and his team also visited the local village secretariat and Rythu Bharosa Kendra. In the evening, the NITI team held a meeting with industrialists and representatives of industry associations at the AP Industrial Infrastructure Corporation headquarters at Mangalagiri.

Special Chief Secretary (Industries and Infrastructure) R Karikal Valaven made a presentation on the various initiatives of the state government to promote industrial growth in the state. The team also interacted with Vice-Chancellors of universities, academicians and representatives of civil society organisations at the Acharya Nagarjuna University.