No Construction Work Was On At Kolkata's Majerhat Bridge Collapse Site, Say Officials

The railway department clarified that the maintenance of the collapsed portion of the road over bridge is not under their jurisdiction. 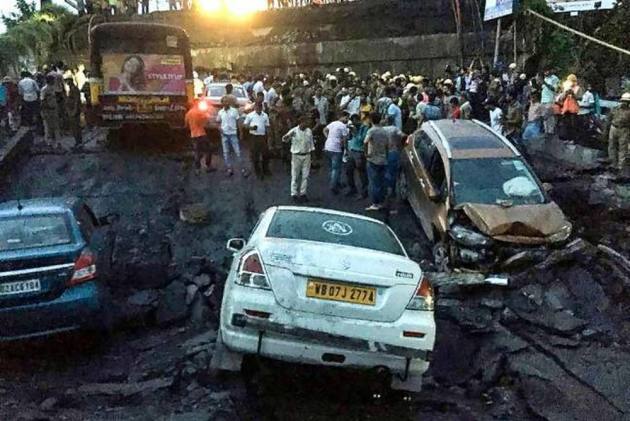 Amid blame game over the partial collapse of a bridge in south Kolkata's Majerhat, the Eastern Railway on Wednesday confirmed it was not conducting any maintenance work at the accident site.

"It is stated by a section of press and media that railway's construction work was going on. It is clarified that no railway work was going on at the affected Majerhat bridge," a release issued by the Eastern Railway said.

The railway department also clarified that the maintenance of the collapsed portion of the road over bridge is not under their jurisdiction and said none of the railway passengers or employees were injured in the accident.

A youth was killed and at least 19 others were injured after a portion of a 40 year old bridge in Majerhat area, came crashing down at around 4.30 p.m. on Tuesday.

Several vehicles were damaged and many people were feared trapped under the rubble.

Following the clash, state urban development minister Firhad Hakim had stated that the heavy piling work that is going on at the adjacent Metro project, could have turned the foundation of the bridge weaker.

The Metro authority, however, said there was no link between the ongoing construction work of the metro project and the bridge collapse.

The Eastern Railway also clarified that the train services through Majerhat railway station had been temporarily suspended following the accident.

"Circular Railway train services are being maintained between Dumdum junction station and BBD Bag station. However, the train services on Budge Budge-Ballygunj section may be restored after ensuring the safety," it added.