No hope for Akali Dal's revival till Badal, Majithia at helm: Channi

He said Badal and Majithia have brought the SAD, a party that once boasted of tall leaders like late Jathedar Gurcharan Singh Tohra and late Jathedar Jagdev Singh Talwandi, to ruins. 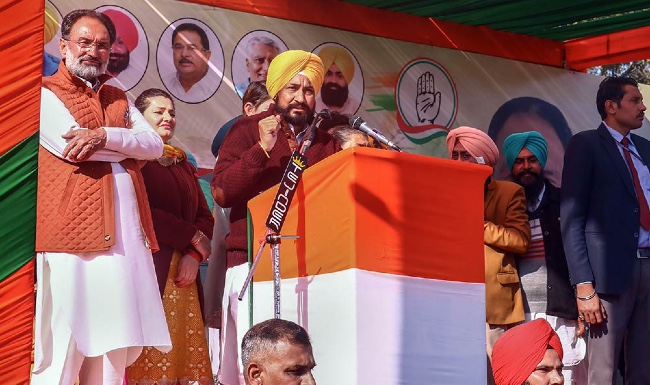 Punjab Chief Minister Charanjit Singh Channi on Wednesday said till the time Sukhbir Singh Badal and Bikram Singh Majithia are at the helm of the Shiromani Akali Dal, the party cannot hope for a revival.

Channi also hit out at Aam Aadmi Party (AAP) national convenor and Delhi Chief Minister Arvind Kejriwal, saying that he is indulging in "theatrics" with the sole aim to capture power in Punjab but is unable to keep his flock together.

Till the time "these two (Sukhbir Singh Badal and Bikram Singh Majithia) are at the helm of affairs in the Akali Dal, the grand old party cannot hope for a revival," Channi said.

Remembering towering SAD leaders such as Tohra, Talwandi and Late Master Tara Singh, the chief minister said the party which once boasted of such leadership has been "brought to ruins" by Badal and Majithia.

"The same Majithia is now on the run from the law after the registration of an FIR against him in a drugs case," he added. Taking on Kejriwal for his "antics", Channi said the Delhi chief minister used to accuse Majithia of being the kingpin of drug trade but apologised to him later.

According to an official release, the chief minister said Kejriwal is indulging in "theatrics" with the sole aim of capturing power in Punjab but is unable to keep his flock together as 10 of his MLAs and three former MPs have already bid him goodbye.

"How can such a person give good governance to the people of Punjab?" Channi asked. Accusing Amarinder Singh of being hand in glove with the Akalis, Channi said that the former chief minister "listened only to his cronies and is paying the price for the same."

Listing his government's pro-people measures, Channi said power bill arrears worth Rs 1,500 crore have been waived for consumers having load up to 2 KW, power tariff for domestic consumers was reduced by Rs 3 per unit, water charges were brought down to flat Rs 50 from Rs 160 earlier and fuel prices were slashed.

Earlier, the chief minister announced that Ghanaur will be granted sub-division status. It will be formally approved in the next cabinet meeting. Channi also laid foundation stones for projects worth Rs 137 crore. These include projects worth Rs 105 crore for strengthening road infrastructure in the constituency and Rs 32 crore for various sewerage and clean drinking water schemes.