In an interview with Outlook, Dr Kafeel Khan said the health situation in Uttar Pradesh other states will further deteriorate further. 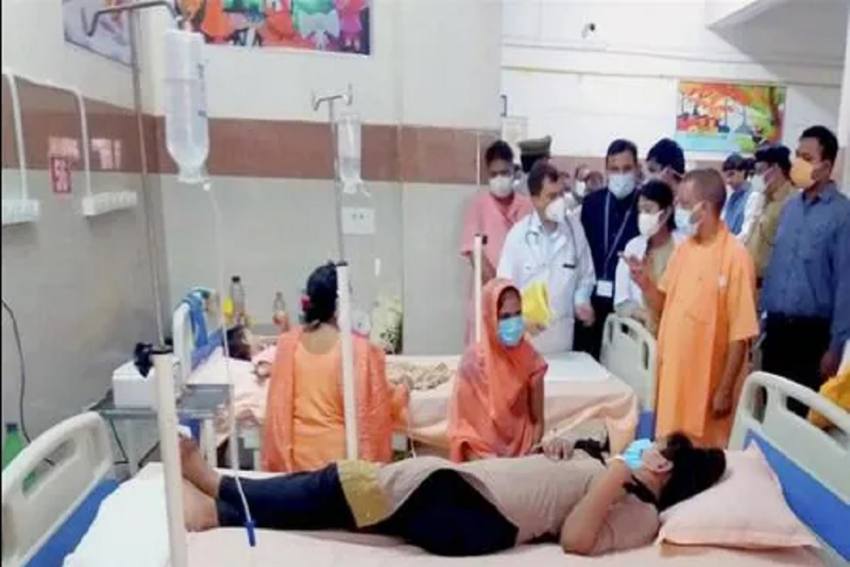 Paediatrician Dr Kafeel Khan has been serving a suspension order for over four years for his alleged negligence in a case that shook the entire nation. In August 2017 as many as 63 children, who were admitted to BRD Medical College, Gorakhpur died as the hospital ran out of oxygen supply.

Though he has been given a clean chit by the hospital internal committee and even the government hasn’t been able to prove his negligence yet his suspension order hasn’t been revoked.

Dr Khan has been holding medical camps and spreading health awareness among rural people after his suspension. He has been dealing with AES disease for several years.

In an interview with Outlook, Dr Khan says that more rain and laxity of health officers in carrying out efficient vaccination drive against Japanese Encephalitis has aggravated the disease in Uttar Pradesh and other states. Excerpts:-

Several districts in Uttar Pradesh and Bihar have reported an outbreak of a viral fever along with other complications such as headache, vomiting, hypertonia etc among kids and adults. Some reports say that it's mysterious fever, viral fever, dengue and malaria, while others call it scrub typhus, leptospirosis etc. Are these different diseases or is there anything common in them?

One thing I want to clear here is that there is no such term as a mysterious disease. There has to be some provisional diagnosis. Dengue and Malaria could be diagnosed easily and are treatable.

Acute Encephalitis Syndrome or AES is a general umbrella term. The two typical symptoms of AES is a fever of 15 days and altered sensorium that is a change in the behaviour of the patient whether a kid or an adult. They can become irritable, restless, violent etc.

Japanese encephalitis is a viral disease and is caused mainly due to mosquitos. Some AES like viral encephalitis does spread through contact but that’s rare and not such a big cause for concern. Besides mosquitoes, even mite bite to kids can cause AES like scrub typhus.

Out of all the AES that you have mentioned, which is the most prevalent among kids?

Out of all the cases, 5 to 10 per cent are Japanese Encephalitis. Rest are Scrub Typhus, Herpes Viral encephalitis, enteric fever encephalitis ie Typhoid, dengue encephalitis, Leptospirosis encephalitis and others. It is also true that despite so much medical research and progress, the reason for 50 per cent of AES is still unknown.

Normally, AES is known to be prevalent in parts of Eastern Uttar Pradesh is like Gorakhpur and neighbouring districts but this time it looks like that it has spread to the whole of Uttar Pradesh and other states as well. What is the reason for it?

Let me tell you that the pattern of spread of this disease is almost similar and it repeats every two to three years. It starts from Bihar in May and June where the weather is quite hot and humid. Then with the onset of Monsoon, it travels to other areas like West Bengal, Assam and Eastern Uttar Pradesh. All these four areas get severely affected.

Why is AES prevalent in these areas only?

Over a long period of research, we have found that there are mainly seven Ps that has a very strong correlation with its outbreak. These are poverty, population, poor sanitation, poor personal hygiene, poor access to safe drinking water, poor vaccination drive and poor nutrition. Open defecation, contaminated drinking water, mal-nourishment play a crucial role in its spread.

In every cycle, AES affects thousands of kids in these areas and about 20 per cent don’t survive. It infects adults also but kids are more vulnerable. The ratio of kids and adults are 90:10. If you check the 2017 data of Baba Raghav Das Medical College Gorakhpur, you will find many adults had succumbed to the disease.

Why is vaccination so poor among people in these areas?

Japanese Encephalitis is caused by mosquitos and we have a very good vaccine that can provide excellent protection from it but the government vaccination drive doesn’t reach the homes of poor people. While rich people get their kids vaccinated at private healthcare centres paying money, the poor remain vulnerable and they suffer when the outbreaks start. If we can vaccinate poor kids efficiently, we can save hundreds of lives. For more than 20 years, I have been hearing claims of every government that they have vaccinated more than 90 lakh kids for Japanese Encephalitis but unfortunately, the claims fall flat every time the outbreak happens. If kids of the affluent class don’t get Japanese Encephalitis and poor kids fall sick because of that, it clearly shows that they are not vaccinated and the claims are only on paper. I personally believe that government health officers who go for vaccination drives do paperwork merely.

But don’t you think this time it has spread to the whole of Uttar Pradesh and going to new areas as well. There were reports of deaths due to AES in Agra and Meerut as well. What has gone wrong this time?

As I said it comes after a cycle of two to three years with a huge spread, last time was in 2017-18, so this time it is happening in 2020-2021. But yes I agree that this time it has spread to almost all the 75 districts in Uttar Pradesh and the situation is really deplorable. Patients are not getting beds in hospitals in cities like Kanpur and Lucknow.

I think this time there are more rains which have caused a favourable climatic condition for disease to spread. Another reason could be the officials going into the election mode. Since the state assembly election is to be held the next year, the health officials might have become lax in carrying out the vaccination drive/awareness camps properly. This is also true that due to Covid-19, the non-Covid disease has been ignored.

As you said that 20 per cent of kids die out of the total number of infected, isn’t the mortality rate quite high? Is it due to a lack of medical facilities?

Yes, In Northern states primary health centres are in shamble as compared to the southern part of the country. Most of the people go to unqualified medical practitioners as they don’t get qualified doctors. You will be surprised to know that 75 per cent of villagers get their primary health treatment from them as Primary Health Care Centres are either not accessible to them or closed after 2 in the afternoon.

The reason for high death among AES patients is due to the unavailability of proper primary medical care. By the time, the patient reaches the medical college or a big hospital, his condition becomes quite vulnerable. The more you delay in providing proper medication at the early stage, the lesser is the chance of survival of the kid. In many cases, we saw in BRD that patients used to arrive so late that even if we gave them the best medicines and treatment, we couldn’t save their lives.

How do you see the situation from here? As the Monsoon are on its last legs, do you think the cases will go down now?

I think September is going to be worse than what the situation is today as the threat of Malaria, Dengue, Hepatitis Diarrhea, Ear discharge, Skin diseases increase as the flood water recedes. We will witness more cases and if we can’t provide timely treatment to them, there will be more and more deaths. It is very unfortunate to see that almost all the hospitals are full and kids are lying on pavements and corridors of hospitals. Pictures in newspapers are heart-wrenching where three kids have occupied one bed in a hospital. I think the state government must order an investigation to hold people responsible for poor vaccination drives and awareness camps.