No Pleasing The Patidars

How the first Vijay Rupani led BJP government show of strength against the Patidar Anamat Andolan Samiti came a cropper... 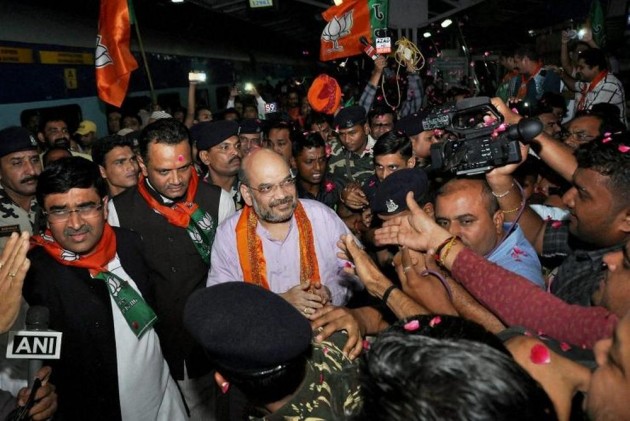 The first Vijay Rupani led BJP government show of strength against the Patidar Anamat Andolan Samiti(PAAS) came a cropper here on Thursday night following bedlam at the public meeting, compelling national BJP president Amit Shah to cut short his speech and the police to resort to lathi charge and bursting of teargas shells to quell violence.

Despite massive deployment of state police power, PAAS supporters mingled in the crowd marshalled by the ruling establishment to enter into the function venue where legislators of the Patel community were to be felicitated by BJP chief Shah and Gujarat chief minister Vijay Rupani.

Belying the organisers' claim that over a lakh members of the Patel community would attend the function, the attendance turned out to be much lesser as over 500 supporters of PAAS, led by BJP dissident MLA Nalin Kotadia prevented people from coming to the venue. Police resorted to lathi charge and burst teargas shells to disperse PAAS supporters.

PAAS supporters started raising slogans like "jai Sardar, jai Patidar" and began to hurl chairs as soon as Amit Shah and Vijay Rupani stood on the stage. Both the BJP leaders cut short their speeches to a couple of minutes as a result of the bedlam created by the PAAS supporters.

A life-size cut-out of Amit Shah, put up outside the venue, was 'beheaded' by the PAAS supporters.

Police took into custody over 100 supporters of PAAS, including their district conveners. PAAS office bearers all over the state had been placed under 'unofficial' house arrest as video clips circulated by supporters to the media showed. Yet it did not prevent Patel supporters at the event from keeping up a steady chant of 'Hardik-Hardik'.

The felicitation of Patel community legislators was organised by some local businessmen to express confidence in the BJP government but was for all practical purposes the brainchild of the BJP national chief Shah. The state government had pulled out all stops to make the function a success. Besides, the strength of the police commisionerate that this city arranged for this function included the deployment of two inspector generals of police (IGPs), one DIG, six DCPs, 13 ACPs, 29 police inspectors and 70 police sub-inspectors and 2000 policemen. And despite this deployment the Patidar wrath was on full display.

PAAS supporters, who roamed around the venue, preventing people from attending the function, pelted stones at the policemen deployed to provide security to Shah and other leaders of the BJP.

The Surat district collector ordered the closure of mobile Internet service in and around the city as a precautionary measure to prevent spreading of rumours through social media. This however did not prevent hordes of people lined up on terraces from shouting 'jai Sardar jai Patidar' when BJP legislators and ministers left the venue.

Witnessing the hostile reaction of the audience at the function, both BJP chief Shah and chief minister Rupani shortened their speech to a few minutes. Even Patel minister Purshottam Rupala's speech was met with a constant chant of 'Hardik-Hardik' by the audience.