Not Just The Earth

But even China moved. The world had good reason to worry. But does rapid, open response to the quake disaster mark the birth of a more responsible, transparent China? The massive earthquake struck China’s Southwest Sichuan province while Beijing was fending off criticism over its hard-line handling of the unrest in Tibet, backtracking on promised free access for journalists throughout China leading up to the summer Olympics and mounting its own hostile attack on the Western media. China’s image in the West was turning negative. And given the military junta’s dismal handling of the cyclone that killed more than 100,000 in Burma only days earlier, the world held its breath on how China would react to its own disaster that so far left more than 55,000 dead and 5 million homeless--the worst in over three decades.

The world had good reason to worry. When the last mega-earthquake that killed 250,000 in Tangshan occurred in 1976, China was a closed society suffering from 10 years of internal political turmoil, and the government tightly controlled the flow of information, not so different from the generals of Burma today. Beijing did not mobilize a nationwide rescue and refused outside help. Reform and openness that followed have changed China dramatically. But old habits die hard. The Chinese government’s initial cover-up of the SARS epidemic in 2003 led to deadly consequences around the world and indicated that China had a way to go before claiming to be a responsible world power.

With the world spotlight on China after the May 12 earthquake, the leaders wasted no time in taking decisive action, and what the world has witnessed since is one of the largest mobilizations and the most extensive rescue operations in response to a peacetime natural disaster in human history. 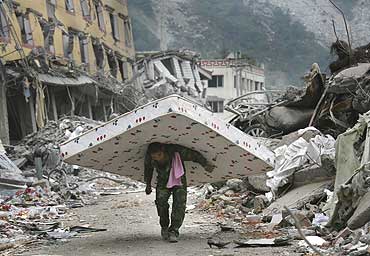 The sheer political determination of the top leadership and hands on involvement helped in unprecedented mobilization of all government resources. At the very core of the rescue-and-relief efforts is the rapid deployment of 130,000 PLA soldiers and paramilitary police forces within days of the disaster. The operation has moved five percent of China’s 2.3 million military personnel to the disaster zones; it has coordinated joint movements of army, navy, air force and other units, which have engaged in air-dropping and parachuting, and moving relief supplies by railway, trucks and on-foot marches to isolated towns and villages. Hundreds of rescue and medical teams and hundreds of tons of needed supplies of all kinds have poured into the quake areas.

The Chinese media simultaneously broke away from traditional control and provided around-the-clock live coverage of the unfolding rescue operations. The images of a tearful Premier Wen in the epicenter comforting crying babies, the selfless young PLA soldiers clawing with bare hands in a desperate fight against time to save lives, the thousands of dead children under collapsed school buildings and the joy of survivors pulled from the rubble sent shockwaves throughout China and triggered a never-before-seen emotional response from the Chinese public.

The tragedy has rallied the nation and brought out the best in its citizens. The masses that were used to government-sponsored political movements in the past are now taking their own initiative: Lines of people donated blood and filled the blood banks, opened wallets to give cash now counting in the billions of RMBs, and rushed from far away, even from other countries, to volunteer in the disaster region.

Just as the opening of the domestic media galvanized the Chinese public, the free access given to foreign journalists in the quake areas has resulted in positive reporting by the foreign media, spurring worldwide sympathy toward the earthquake victims and praise for the Chinese government. China opened itself to the world for help, allowing foreign rescue and medial teams to enter the country for the first time to assist in relief operations, and accepting generous donations flooding in from around the globe.

Now the world has good reason to be impressed. Beijing’s rapid response to the current crisis, the heroic stories of survival and rescue, the nationwide outpouring of support and unprecedented open media coverage of relief efforts have produced more than tens of thousands of life-saving miracles. China has sent a clear message to the world that it is no Burma. Chinese leaders have set an example for the xenophobic generals in Rangoon on how to execute a disaster-relief operation, which may well have influenced the Burmese decision to accept an ASEAN-led international assistance mission more than two weeks after the cyclone.

But for a tectonic shift to occur in the world’s perception of China as a new kind of superpower, Beijing needs to do more than demonstrate that its crisis management is better than Burma’s or that post-earthquake Sichuan is no post-Katrina New Orleans.

First of all, the Chinese leadership faces the challenge of translating the initial success of this disaster relief into long-lasting benefits for the Chinese people. While Beijing should be congratulated for its human-centered rescue efforts, extending such an approach to other areas such as Tibet would win China greater respect. A global power whose responsibility begins at home applies to China now more than ever before.

And when the victims are buried and the reconstruction process begins, Beijing should encourage a nationwide debate on the lessons of the catastrophe. It is no doubt tempting for the Chinese Communist Party propagandists to convert the current high-level support of the Chinese people into a glorifying feast for the party and to re-assert tighter control over the media on politically sensitive issues. But the CCP could confront a legitimacy crisis unless it gives honest answers to thousands of grieving parents on why so many schools collapsed in a country that has built some of the world’s best skyscrapers in Beijing and Shanghai. It is also high time for China to reflect on its development strategy that has heavily favored the cities over the countryside, the coastal regions over the interior and the rich over the poor during the past two decades.

Furthermore, China will be tested for its willingness and ability to play a more active international role, commensurate to its growing world-power status. While it is understandable that the Chinese public has been emotionally involved in such a calamity so close to home, the country will command universal respect when its government and its citizens display as much care to other humanitarian crises around the world as they have at home.

The Chinese responses to the immense tragedy have moved the country toward a more open and responsible society. But China will remain in the spotlight in this very eventful year as the Olympic Games approach. China could make a great leap forward beyond its borders when it’s willing to play a more active role in alleviating human suffering in countries such as Burma, Sudan and Zimbabwe, and take the lead in world affairs beyond its well-defined but narrow national interest.

Wenran Jiang is the acting director of the China Institute at the University of Alberta and a senior fellow of the Asia Pacific Foundation of Canada. Rights: © 2008 Yale Center for the Study of Globalizaton. YaleGlobal Online