Not Quite Milk And Honey

An internecine political battle rages within the BJP for control of milk cooperatives. 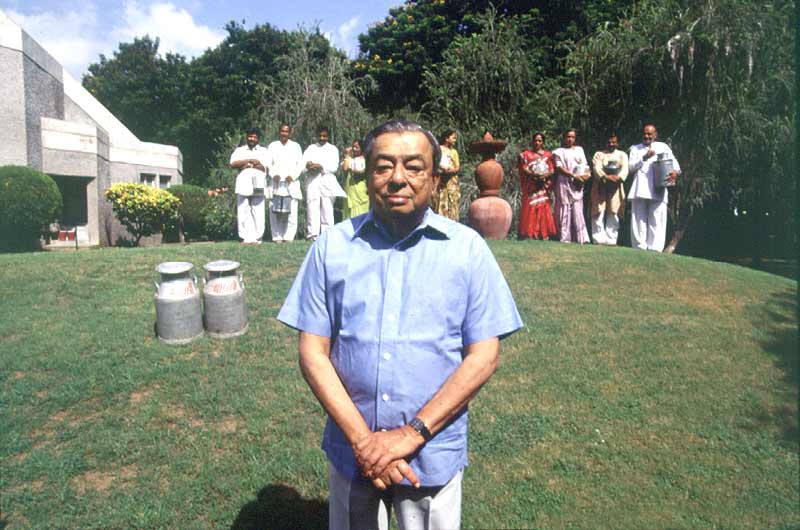 Any jackass can kick down a barn but it takes a good carpenter to build one.

It took Dr Verghese Kurien, the father of Indian milk revolution, a lifetime to ensure that India became the largest milk producer in the world, but only a few months for then chief minister, Narendra Modi, to inject the poison of politics into the body mechanism of milk cooperatives in Gujarat. Mr Modi is now the prime minister and this ‘Gujarat’ model is set to be replicated countrywide to ensure BJP control of milk cooperatives for enhanced consolidation of political power.

It was Mr Modi who conspired to have Dr Kurien ejected from both the Institute of Rural Management, Anand (IRMA) and Gujarat Cooperative Milk Marketing Federation (GCMMF) in 2006.The two never saw eye to eye. Dr Kurien guarded his flock of milk producers with steely resolve while Mr Modi possessed an insatiable appetite for total control.

The milk cooperatives of Gujarat, with a captive vote bank of approx 10 million, and fat finances, was too juicy a preposition to let go. Dr Kurien would not relent, and paid the price for it. Thereafter there was no stopping Mr Modi, who took control of the bulk of the milk cooperative in Gujarat and his chosen partymen took over as chairpersons of the district milk dairies of the state.

So deep-rooted was Mr Modi’s animosity towards Dr Kurien that when he passed away in September 9, 2012, Mr Modi, though less than 25 kms away from Anand, did not feel it fit to go down and pay his last respects.

Sow the wind and you end up reaping the whirlwind. Lesser minions in the Gujarat BJP are waking up to the potential of massive financial leverage of the cooperative milk movement and the potential of captive vote banks at their command. Mr Modi has too much on his plate and little time for the white droplets spilling over the edges of the milk glass. An internecine warfare rages within, as people try to outdo each other to curry favour with the Prime Minister. To cite an example of sweeping sycophancy, the Banaskantha district cooperative dairy chairman announced setting up of a new milk processing plant in Varanasi within one hour of Mr Modi being elected from the holy city. Need-demand survey? My foot!

Anand town and Gujarat state have been at the vanguard of the milk revolution in making India the largest milk producing country since 1997 (2012-13 milk production: 132 million tonnes). Energised cooperative dairy set ups in various states of the country stand as thriving memorials to Dr Kurien. The marketing body of milk cooperative in Gujarat he set up (Gujarat Cooperative Milk Marketing Federation—GCMMF) popularly known through brands like AMUL and SAGAR is today India’s third largest food brand with an annual turnover of Rs 18,150 crores or US$ 3 billion. Approximately 13.10 million litres of milk is collected daily from 17,025 village milk cooperative societies owing allegiance to 17 member unions covering 31 districts and 3.23 million milk producer members. The numbers not only add up to an imposing economic edifice but also present a salivating political preposition.

This is the backdrop in which an internecine political battle rages within the BJP for control of milk cooperatives.

The trouble for Vipul Chaudhary, chairman of Dudhsagar dairy of Mehsana district in north Gujarat and by virtue of it, chairman of GCMMF in August 2012, boiled over last year. A politician of BJP stock, he was served a no confidence notice in October 2013 by 14 of the 17 members of the GCMMF board, alleging financial irregularities and irresponsible decision making in the Mehsana dairy.

Mr Chaudhary moved the High Court with the plea that there is no provision in the Gujarat Cooperative Societies Act, 1961 and in the by-laws of the GCMMF for such a motion. A single judge bench stayed the meeting, but a division bench vacated it. While the legal lob-and-volley continued, Mr Chaudhary was forced out of the GCMMF chairmanship, though he continues to head the Mehsana milk set up.

Unseating Mr Chaudhary from the GCMMF chairmanship was not the end of his woes. The donation of cattlefeed worth Rs 22 crores for the scarcity-hit cattle of Maharashtra was turned into an issue. A PIL filed soon after was made the basis of an enquiry ordered at the behest of the state government by the Registrar of cooperatives. It was followed up by an FIR, filed against the chairman and board of directors of the Dudsagar Dairy. As Mr Chaudhary’s support was crucial in the 2014 Lok Sabha elections, the sword of Damocles was kept hanging over his head. Instead, MD N.J. Bakshi and the CGM (Finance) R.M. Modi, upright officials, were arrested in the dead of night, handcuffed and brought to the dairy.

The entire police ploy was to terrorise and make a spectacle of the officers to keep Mr Chaudhary in check. Mr Chaudhary’s problems multiplied after his presence was noted at a Rahul Gandhi interaction in Ahmedabad last year, and BJP leaders suspected him of cosying up to UPA agriculture minister Sharad Pawar.

Mr Chaudhary was a party legislator in the first BJP government in Gujarat, headed by Keshubhai Patel, but went along with Shankersinh Vaghela when he rebelled in 1995, also becoming a minister in his cabinet. Mr Chaudhary subsequently did a ‘sastang-dandvat’ at a public function, touching the feet of Modi, but the knives are still out for him.

Mr Chaudhary was replaced in August 1,2014 as chairman of GCMMF by Jetha Patel who was unanimously elected by all 17 board members. The influence of the BJP was visible when two state- level leaders handed out a mandate on behalf of Chief Minister Anandiben Patel in favour of Mr Patel.

The immediate implication is that the decision to unseat Mr Chaudhary, initiated last year, also had the approval of then chief minister Modi. Dr Kurien must have turned in his grave at such a brazen show of political interference in the milk cooperative movement.

A key man involved in the milk movement had the last word when he said, “You build on cost and you borrow on value. Kurien spent his life building on cost, Modi has just borrowed on value. He should do well to remember. The greatest monarch on the proudest throne is obliged to sit upon his own bottom and the heat sears without discrimination”.